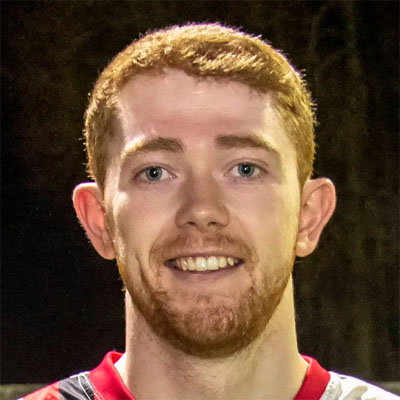 Aaron Millar was signed by Kieran McAnespie at the start of the 2019-20 season. A tall, rangy striker he had been a product of Clyde's youth set up. He had a number of appearances for the Bully Wee without scoring a single goal that led him to be loaned out to St Rochs, Pollok and Arthurlie.

Aaron looked to be the answer to the Bankies goalscoring problems as he netted two hat tricks during the pre-season against Yoker and Gartcairn. He kept this form going by hitting another treble in his competitive debut at Vale of Leven. However, it became obvious that he was not as effective against better teams once the league started and he failed to score in his next eleven games. This run culminated in Aaron sustaining a serious ankle injury against Cumnock.

After 3 months out, Aaron returned for the end of the season and netted 5 times in the last seven matches showing what he could be capable of. At the end of the term Aaron was reported to have signed for league newcomers St Cadocs.