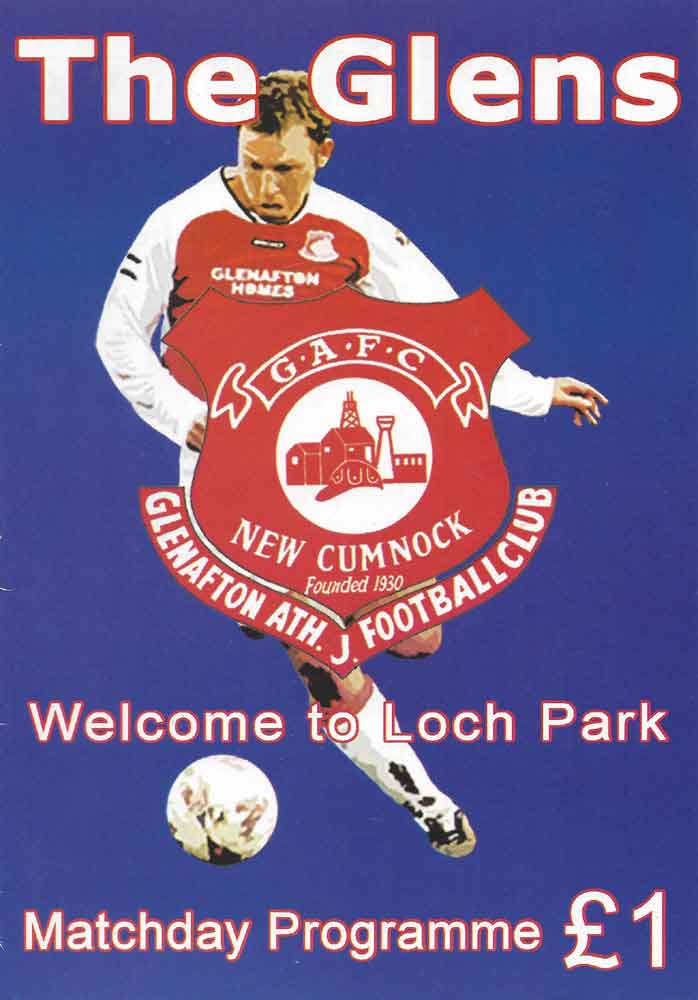 Stevie Dymock ended his goal drought with a brace of goals as he helped to crush Glenafton at Loch Park in a superb 3-0 victory that returned the Bankies to the top of the league table.

After last weeks disappointing defeat at home to Hurlford, Budgie McGhie made no fewer than six changes to the starting line up. Playing in a 3-5-2 formation for the first time in a long while, McGhie may have found the formation that suits his current squad. Looking particularly strong in the middle of the park the trio of MacKinnon, Murray and Martin controlled the play for much of the match. And, with two willing attacking full backs in the shape of McMenamin and Allum the Bankies looked to have more attacking options than they have had all season.

Clydebank controlled the opening exchanges in a pleasant day at Loch Park, with the sun making a rare appearance this year. The pitch was in excellent condition, and this was definitely to the Bankies liking. Within the opening few minutes Murray had an effort on goal, then MacKinnon produced one of his dangerous runs, and he could have had a penalty but tried to ride the tackle and he ultimately lost control of the ball.

It was no surprise that it was MacKinnon who was pulling the strings for the Bankies and he almost opened the scoring after fifteen minutes when his rasping right foot shot was quite superbly touched on to the cross bar by Semple. Glenafton have been improving recently after a poor start to their league campaign and they came up with a couple of long range efforts from McBride, and Ex Bankie Stevie Docherty.

It was during this period of Ascendancy for the home side that the Bankies took the lead. With 27 minutes on the clock, Mark Hailstones challenged for a looping high ball into the box. The ball broke nicely for Stevie Dymock who shot first time against the Goalkeepers right hand post. There was a second of hesitancy amongst the support before the ball spun into the other corner of the net ending Dymock’s goal drought that dates back to the opening day of the season.

Two minutes later and the Bankies doubled their lead. Ross Campbell rose above the Glens to defence to bullet home a header at the near post from a corner kick.

The home side were clearly rattled at this and a resurgent Stevie Dymock almost grabbed his second. Reacting quickly to a deflected through ball. He shot low to Semple’s right hand side, but the keeper was down quickly to save the ball. Hailstones then tried to chip the keeper from 25 yards, as he had no other options ahead of him, but the ball drifted harmlessly over the top of the goal.

Glenafton made a change at the break replacing their left back who was given a torrid time by Allum, Hailstones and MacKinnon. It made no difference as the Bankies went three up within minutes of the restart. Stevie Dymock timed his run to perfection as he broke Glenafton’s offside trap. Bearing down on goal, Dymock drew the goalkeeper from his line before superbly stroking the ball into the corner of the net.

With the points virtually guaranteed, the Bankies eased off a little, and Glenafton created a couple of openings. These were restricted to long range with only a Howie drive causing Liam Campbell some concern. Any hopes of a Glenafton comeback were well and truly dashed when Wilson was given a straight red card for viciously kicking MacKinnon as he was about to breach the Glens rearguard.

With half an hour still remaining Budgie McGhie started to make substitutions as the match began to fizzle out. Stevie Dymock could have set up a fourth goal for Hailstones, but the smell of a hat trick was too much for him and he tried to go on his own instead of squaring the ball to his unmarked team mate. He lost control of the ball, and it was his last piece of the action as his good day’s work ended with McPherson replacing him from the subs bench.

Ten man Glenafton may have grabbed a late consolation when a header from a corner kick looped over Liam Campbell, however Tommy Martin was on hand at the back post to head away. Clydebank comfortably saw out time to record possibly their best result of the season.

This was the response demanded by the supporters after the damaging home defeat by Hurlford the previous week. It is only one result however, and to maintain a promotion challenge this is the kind of performance that needs to be seen on a more consistent basis. Next week sees the Bankies square up against fellow promotion challengers Girvan in what could be quite possibly the club’s most important match of the season. A victory at Holm Park would open up a gap over the Seasiders and could be the catalyst for the Bankies to go on a promotion winning run.