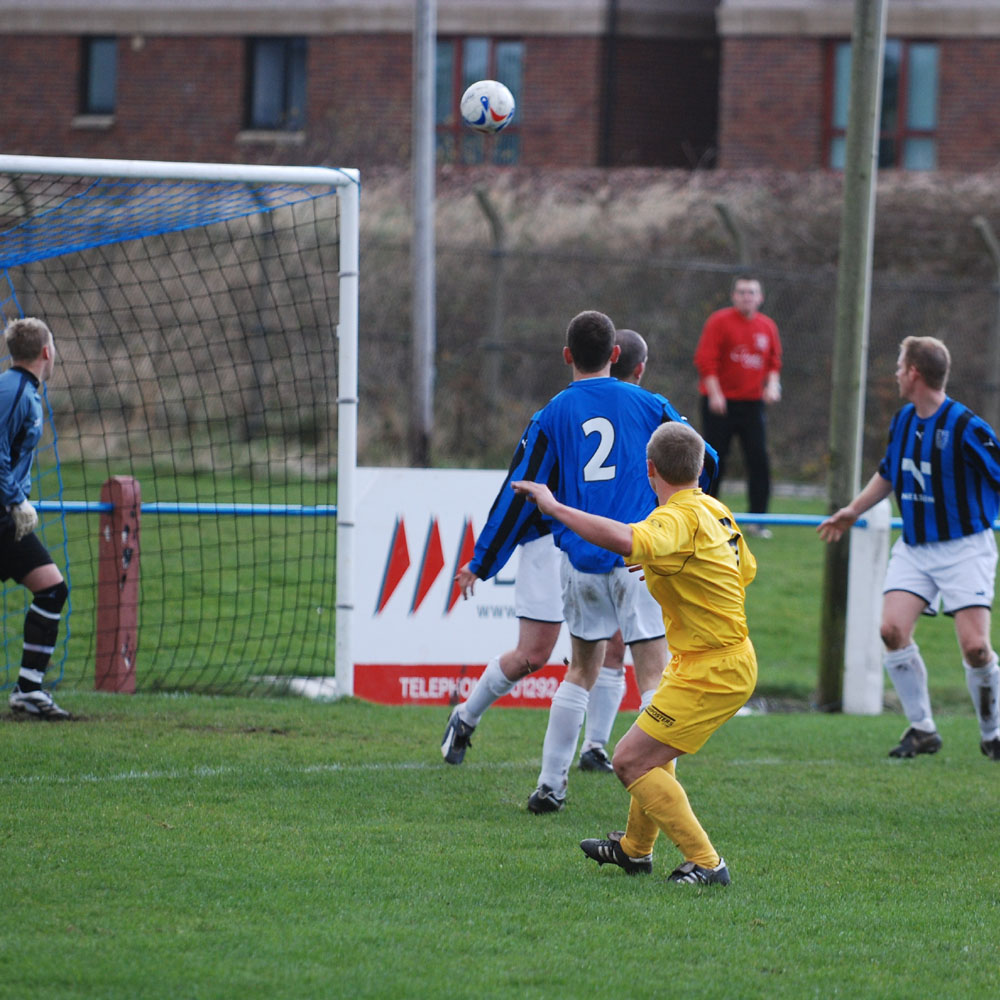 Clydebank's unbeaten start to the league campaign came to an end today at Portland Park after an injury time strike gave Troon all three points. The Bankies came into this game full of confidence and Budgie McGhie was able to field the same eleven who cruised past Forfar in the Scottish cup last week.

The conditions were very unfavourable for the Bankies passing game with a strong swirling wind that both teams found difficult to contend with. So much so, that opportunities were thin on the ground as both teams struggled to keep possession for any length of time

The first decent chance came after 16 minutes, when the Troon right back intercepted the ball straight into the path of Mark Bowie. The Bankies front man skipped inside and cracked in a dipping shot that the home keeper did well to tip over the bar. From the resulting corner, a Cunningham header was blocked on the line and an almighty melee ensued as both sets of players tried to get to the ball. Finally, a Troon defender hacked the ball away, but straight to Alan Jack whose shot went well over the top

The game briefly came to life in this period, and Troon had their only clear cut scoring chance of the half after 19 minutes, when a header from a corner was cleared off the line by Barry Docherty

Soon after, Lappin had a right footed volley easily saved by the Troon Keeper after Docherty linked up with Alan Jack. The game became bogged down again, as both sets of players were struggling to find any form. Troon were getting men behind the ball, and the Bankies attempts to break them down were very laboured.

However, prior to the break the Bankies did carve out a coupe of opportunities. Firstly, Alan Jack shot wide from 25 yards, and then a fantastic break out from Kenna, and through ball saw Bowie break the offside trap. his cross found Mark Hailstones, but unfortunately his curling effort was just high on the right hand side.

The rumbles from the stand were that the second half couldn't be any worse than the first, but it was. Paul Allum gave the ball away after only two minutes of the restart and Barry Docherty had to be alert to block the shot that followed

Down at the other end Hailstones missed a glorious chances when he sliced a volley past the post from close range after the goalkeepers kick out held up in the wind.. Clydebank were marginally the better side at this stage and Andy Kenna cleverly dummied a Lappin cross only for Bowie to tamely hit his shot at the keeper

Troon had failed to create any chances from open play, and it looked like set pieces would be their only route to goal, as a close range headed from a corner went wide.

Craig and Sichi were both introduced into the fray to try and give the Bankies a little spark, and after 72 minutes Alan Jack tried one of his famous long range lob shots. On a windless day it might have caused a problem, but the ball held up in the air long enough for the Troon keeper to retreat and catch the ball

Clydebank were showing a litle more urgency now, and Hailstones beat his man on the left wing and fired in across, that Lennox met at the near post with the toe of his boot. Unfortunately, the Troon keeper was well positioned and blocked the ball with his legs

Clydebank had one or two half chances from distance as the game approached the final whistle in a game neither team really deserved to win. However, the Bankies contrived to throw away all three points in injury time when Barry Docherty was terribly short with a pass. it was picked up by an alert Troon player who fed the ball to Russell who showed great composure to stroke the ball into the corner to give Troon their first league win of the season.

After several weeks of goals, the well dried up today as the Bankies were unable to create very many chances. Although, the wind was a factor, Budgie McGhie will be unhappy that his players were unable to take at least a point from this game. however, with games against out of form Maryhill and struggling Renfrew coming up he will be hoping to get back on the rails as soon as possible.