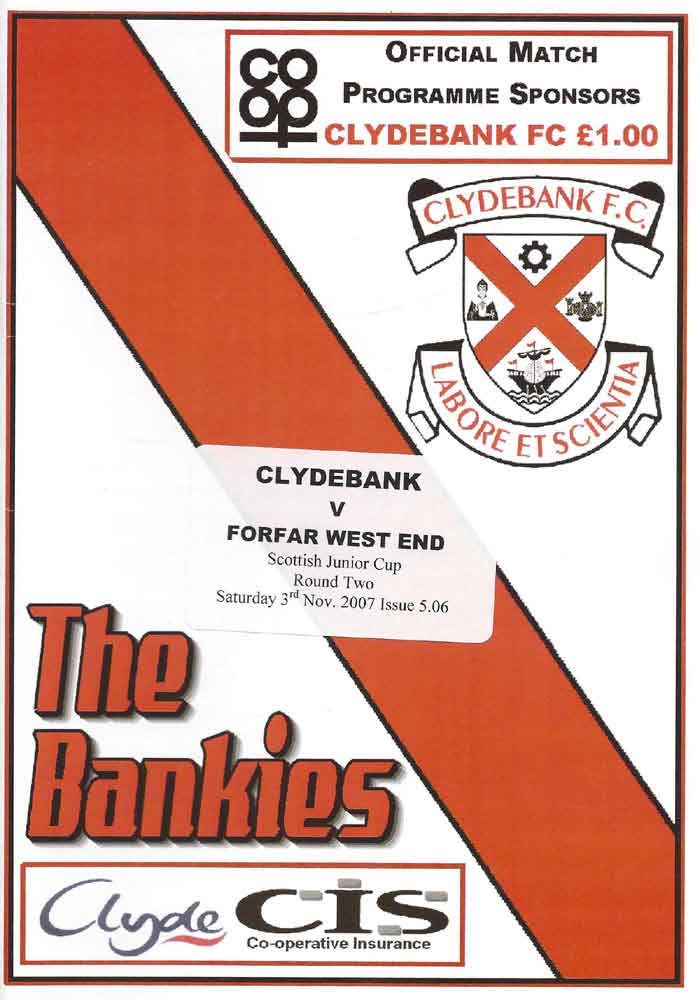 Clydebank progressed to the third round of the Scottish Cup with a 3-1 victory over high flying East rivals Forfar West End. However, the game was not as comfortable as the scoreline suggests.

Budgie McGhie didn't have his troubles to seek with Scott Friel, Sinclair Soutar, Jimmy Duncan, Davie Carr, and Paul Craig all missing. Ged Hoey returned to the squad and a surprise inclusion in the starting line up was Mark Bowie who would go on to leave a major impression on the proceedings.

West End top the Bankies equivalent league in the East Region, and did not come to Glenhead Park to defend. Straight from kick off they went into attack, and Stefan Gonet had to be alert to smother the ball after Pirie almost got on the end of a through ball.

The Bankies haven't been short of form recently either, and were immediately down the other end. Mark Bowie laid the ball off to Alan Jack who went narrowly wide with a 20 yard shot from the outside of his boot. The ref strangely gave a corner and James Lennox almost took advantage as he rose well to meet the ball only to send it over the top.

Clydebank fans have witnessed 24 goals in the last five matches, and were to be treated to another after only four minutes. Barry Docherty started the move with a sweeping ball down the right flank. Mark Hailstones ran onto the ball and despite pressure from a defender whipped over a first time cross where Mark Bowie was on hand to crack a right footed volley high into the net. surely a contender for goal of the season as the Bankies swept from one end of the pitch to the other with only three touches on the ball and the finish was stunning to cap it all off.

Three minutes later and Bowie had another chance. Andy Kenna chipped the ball through on the right hand side, however the striker fluffed his shot over the top

After a period of scrappy play, the visitors began to gain the upper hand. After 12 minutes, Pirie sent a strange sliding effort from twenty yards just wide, and a minute later McKenzie came close with a lob shot after the Bankies conceded a free kick in a dangerous area. west End kept up the pressure, and Gonet was forced into a superb fingertip save from a Byrne Header

The Bankies were relying on breakaways at this stage and from a rare foray up field Bowie fired a shot straight at the Forfar keeper.

The Bankies defence were their own worst enemy conceding a number of free kicks around the edge of the box, however were coping well with the visitors aeriel threat.

As it looked like West End would get level, clydebank raced up the park on the half hour and doubled their lead against the run of play. Hailstones earned a corner on the right hand side and Alan Jack whipped it in to the near post with pace. The ball was beyond Cunningham, but just behind him Mark Bowie stole in to nod it into the net

Forfar lost a little bit of heart after the sucker punch second goal, and Alan Jack came close with a shot on the run after a poor defensive clearance by West End. Pirie almost snatched a lifeline for West end in injury time that their first half play deserved. Barry Docherty was caught trying to play Pirie offside, however the Forfar forward screwed his shot wide when a goal seemed likely.

It was vital that clydebank not concede early in the second period, as Forfar would be right back in the match. however, the Bankies contrived to do so. Pirie had given early warning with an angled drive that Gonet had to beat away within a minute of the restart. The goal came on the 51st minute when a poor Docherty clearance ricocheted off Cunningham's back and straight into the path of McKenzie. His shot clattered off the crossbar and the ball fell to McConnachie who took one touch and shot home from 6 yards.

Forfar continued to dominate possession, but it looked all over when Gibb received a straight red card. The big defender fouled Mark Bowie from behind and then stupidly stood all over his back when the striker was on the ground. The ref who was only yards away had no option to send him off.

Even with the extra man Clydebank struggled to reverse the pattern of play, and Bonella missed a glorious chance to equalise with a header after 64 minutes.

The Bankies finally managed to put some attacks into force. Mark Hailstones had a shot deflected for a corner, from which Lappin cleverly slipped the ball to alan Jack on the edge of the box. Bankies top scorer took one touch but rifled his shot over the top

Clydebank should have given themselves some breathing room after 75 minutes when the ref awarded a spot kick following a foul on Mark Hailstones. Alan Jack hit a decent penalty to the keepers right hand side, however the ball was at a good height and the keeper dived full length to make a great save.

Budgie McGhie, obviously concerned at the threat posed from West End, even with ten men, replaced forward Bowie with Ged Hoey, a midielder. Almost straight away, Forfar missed a gilt edged opportunity when Roberts was sent clear on the left hand side of the box. Fortunately, the striker's diagonal shot sneaked just past the post.

As Forfar pushed men forward space was appearing in their rearguard, and Hailstones did well to create a chance for himself, but he couldn't find a corner and the keeper saved well.

As the 90 minutes came and went, Lennox almost killed the game off with a shot that went just over after good play by Paul Allum. Then in the fourth minute of added time the Bankies were awared a second spot kick when substitute Lee Sichi saw his cross handled in the box for a soft penalty.

Not shying away from his earlier miss, Alan Jack stepped up and slammed the ball to the same corner as before, this time beating the keeper easily. West End weren't happy about the decision and the away bench were calling for their players to keep their discipline, however Syme took it upon himself to get booked, then sent off for dissent. The ref blew for time after a full 6 minutes of injury time had been added on.

Not the best performance of the season by any means, but the result is all that matters. Forfar West End are a useful side in fine form, and to score three goals yet again was hugely satisfying. With the recognised strikeforce and a number of others unavailable, the strength of depth in the squad is being severely tested, but to have a player of Mark Bowie's calibre to call upon when he is available is great news.