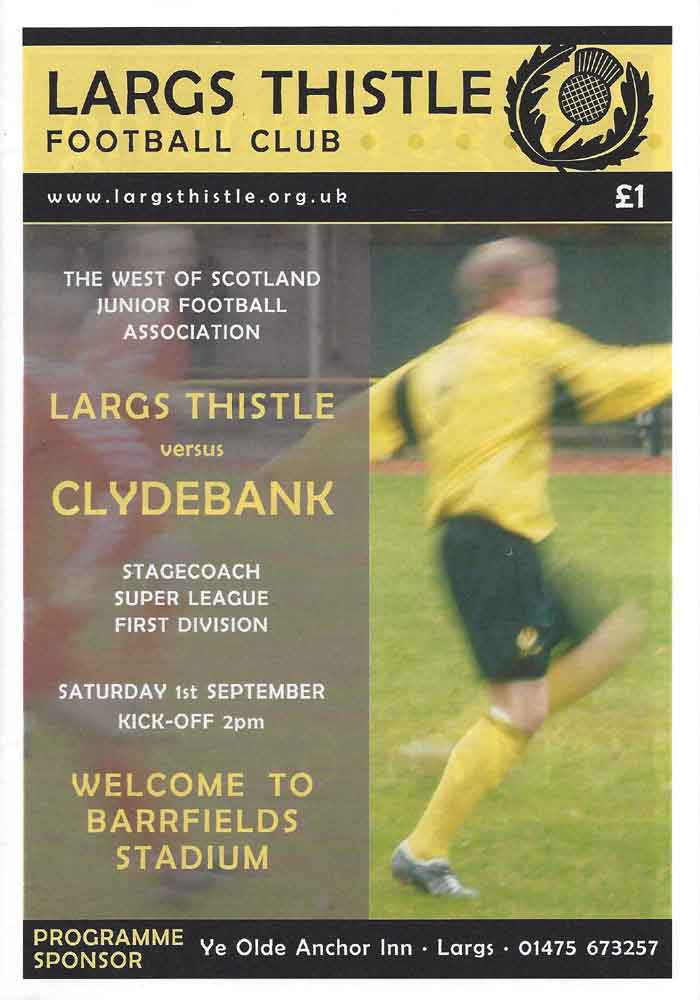 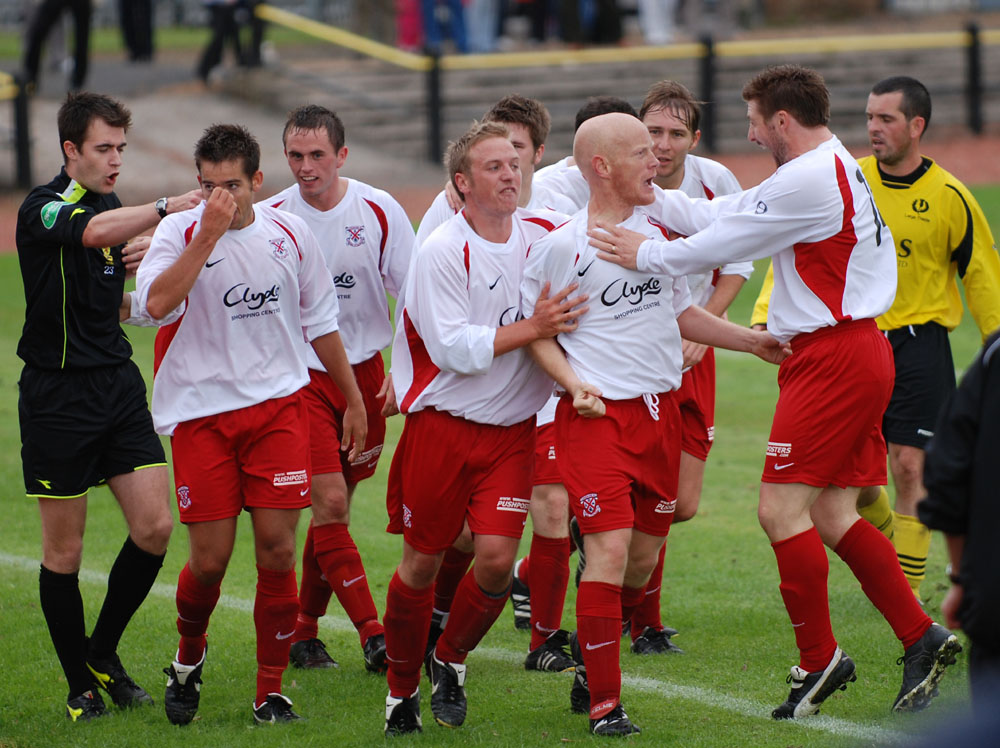 Clydebank snatched a point in an incredible Super League Opener at Barrfields Stadium today. In a match that saw some cycnical time wasting from Largs Thistle, Budgie McGhie sent to the stand and a further four players ordered from the field, the Bankies earned a point thanks to an Andy Kenna header in the ninth minute of injury time.

After a performance to forget on Thursday, James Lennox and Barry Docherty were restored to the starting line up and Gordon Lappin was back in the midfield. Alan Jack dropped to the bench as the Bankies looked to start their first season in the Super League in positive fashion.

As the match got underway it became clear that the Bankies were still suffering a bit of a hangover from Thursday's exertions at Arthurlie. Largs Thistle, with a strong wind at their back had the edge in the opening stages. Employing the long ball tactic at every opportunity, Thistle signalled their intent with a dangerous cross from Cannie that just evaded the incoming forwards.

Although Largs had the better of the first quarter of an hour, clydebank did still create some half chances. Most notably, Fisher sending a right footed volley over the bar after a nod on from Cunningham. Fisher was involved again as the Bankies had a penalty claim turned down. A low cross into the box found craig who took a tumble, but the ref rightly waved play on.

As the half wore on, the Bankies assumed control and a sustained spell of pressure ended with a great chance for Cunningham, but he completely missed his header. The wind was making it difficult for the Bankies defence, as Lennox then Docherty both missed the ball from long clearances by the Largs keeper. Both times, Largs forwards were inches away from getting on the end of these kick outs.

On the half hour, Hoey had a drive go well wide from a Lappin Free kick, then from another Lappin free kick, Carr got a header in on goal. Unfortunately, his header was directly into the ground, and it was an easy grab for Connick in the Largs goal.

Perhaps, the best chance of the match fell to Cunningham, when the ball fell to him around 8 yards out. however, he seemed to hesitate and ended up snatching at the ball and it went wide. The game was held up for 5 minutes as the stand side linesman had to retire injured. Cunningham made up for his miss by making two life saving tackles. In particular a great block from a goal bound shot

Largs wasted a chance to take the lead just before the break, when a direct free kick was taken while the Bankies wall was still getting together. Molloy's shot going past the post much to the annoyance of his team mates.

The first half gave no sign of what was to come in the second half, but an early goal from Largs brought the game to life. A quick breakaway saw the ball crossed in from the right. James Lennox was on his own against three forwards, and the Bankies fans were about to sing his praises as he cut out the cross ball. Unfortunately, he fluffed the clearance right to the feet of McCabe who put the ball away

This signalled some atrocious gamesmanship from Largs, which would ultimately lead to their own undoing. Clydebank tried to get on terms straight away. A glorious through ball to Craig was wasted as the striker opted to take it first time and hit it wide, instead of taking the ball on a few yards. Then a fine passing move saw Craig attempt to round the keeper, but Connick was equal to the task and saved. This was the Craig's last involvement as he was replaced by Bowie.

Largs had chances of their own. Fulton came close with a header and then Dow flashed another over. Then after an hour the game blew up. Jamieson who had only been booked ten minutes earlier, held back Bowie as he attempted to break away. The ref had no option but to show the defender a second yellow card.

Tempers were rising as Bowie was denied a penalty. Cunningham then found his way into the ref's book for a rash challenge. On 66 minutes, Jack replaced Hoey as the Bankies went all out for an equaliser

Straight away, Jack sent a 30 yard free kick just wide of the post. This was after Lappin and Graham were next to feel the wrath of the ref following a spot of wrestling from the midfielders.

Cannie, who played the Bankies supporters all afternoon, was next to find himself in the refs book, after a poor challenge. The Largs front man then engaged in some time wasting of his own by feigning injury and giving supporters the appropriate gesture.

Clydebank were desperately throwing the ball forward in search of an equaliser, but any chance of coming back looked wrecked when Barry Docherty received a straight red card. Docherty tackled Cannie, and the striker impeded the Bankies defender as he tried to get back on his feet. The moment seemed to pass, but in a fit of madness, Docherty shoved the Largs striker to the ground, only a few feet in front of the ref.

Largs seemed to get a lift from this and Fulton had a chance to increase the lead but went wide. The Bankies were a bit deflated, and McGhie threw on Hailstones for Cunningham. This seemed to gee the Bankies up again and Largs were again put on the back foot, with Fisher testing the Largs Keeper.

Largs were desperate to keep the ball in the Bankies half at any cost, and that led to another straight red and a melee of players getting involved. Fisher broke away on the left hand side, and what can only be described as assault by Robertson, saw angry reactions from the Bankies. The Thistle midfielder was off, and Bankies gaffer Budgie McGhie also saw red. With only minutes remaining this seemed to be another way of counting down the clock.

The Bankies threw everything at Largs and this was to cost another red card. From a breakaway, McInnes was caught one on one against Thistle's nippy substitute. The big defender sacrificed himself to avoid a second goal being scored by taking the legs from the front man. This was now the fourth player to leave the field.

Unbelievably, but correctly, the ref played a full ten minutes of injury time and the Bankies got their reward. Lappin played a short corner to Jack. He fired a cross in like a dart, which took a slight deflection to cut out the keeper, and from a few yards out Kenna was on hand to nod it into the net. Cue ecstatic celebrations on the pitch and in the stands.

Clydebank may have been happy with a draw before this match, but the dramtic way it was achieved will live long in the memory. Despite another patchy performance, justice was done in the end. This league is already showing that the level of performance required will have to be high week in,week out in order to compete and challenge at the right end of the table.