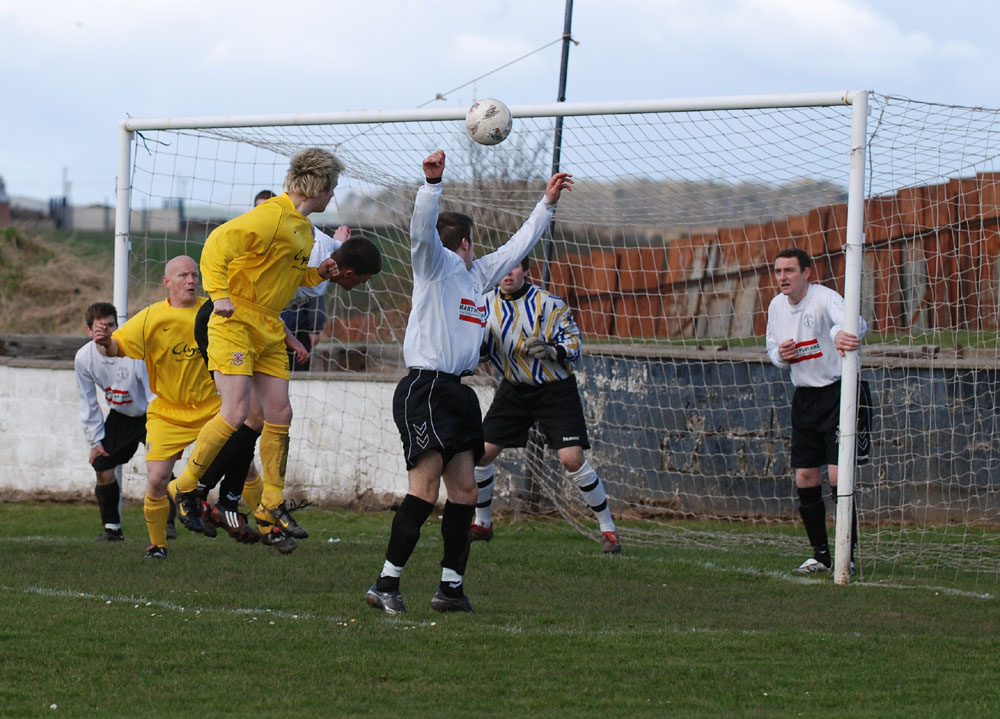 After a four month wait Clydebank finally took to the field for a league match; the venue being New Pebble Park for the Bankies first meeting with Annbank United.

Injuries and other absences meant that Budgie McGhie was down to the bare bones for team selection with Allum, Craig, Cunningham, and Bowie all missing. Alan Jack could only make the bench and Barry Docherty made his first start since November.

The pitch was of the bumpy variety and it only took three minutes to rear it's ugly head. Jerry Packham was caught out by an awkward bounce, allowing Wilson a clear run on goal. However, an equally horrible bounce saw the striker screw his shot wide.

As the match settled down, Clydebank controlled the proceedings without really threatening too much. Kenna weakly headed straight at McGarrity from a Lappin Cross, then Docherty cracked a 25 yard shot over the top from a cross field Miller pass.

After 17 minutes of dominance from the Bankies, the home side took the lead against the run of play. A huge punt up the park by McGarrity was nodded beyond the Bankies defence in to the path of the on-running, and suspiciously offside looking Wilson. Corr closed down the striker quickly, but his mishit shot trickled past the keeper and into the corner of the net

For a time after the goal United had their best spell of the match, and Robson had a great chance to double the lead, when he was left in acres of space on the left hand side. Fortunately, Corr was alert and managed to block his shot for a corner.

The remaining fifteen minutes of the half belonged to the Bankies after several chances were created and squandered. The first opportunity came to Miller after Lennox dribbled past two men and cut the ball back from the bye-line to the striker. however, his shot could have been better as a defender managed to block the ball.

Within a minute, Fisher sent over a dangerous deep cross, where Hailstones and Kenna were unmarked. It was perfect for Kenna to nod in, but with no shout forthcoming, Hailstones stretched too far and took the ball away and beyond the post.

Fisher, the most effective player on display, was next up as he weaved his way into the box and this time beat the keeper only for a defender to scramble the ball off the line and away to safety.

Annbank did manage one shot at goal in this period, a highly dubious free kick from Noble that was just wide and had Corr scarambling across his goal

Back down the other end another great opportunity went a begging. Kenna slid a great through ball to Fisher, who took two strides and shot, but McGarrity was quick off his line to charge the ball down

Almost immediately Andy Kenna passed up the Bankies best chance of the match. A great early cross from Fisher dropped onto Kenna's head from only 6 yards out in the centre of the goal. It was harder to miss, but somehow he did by aiming his header at the keeper who couldn't believe his luck.

Annbank started the second period brightly with Noble's cross/shot being tipped over by Corr. McKenzie then volleyed several yards past from the resultant corner

The Bankies quickly resumed control, and the pitch had a helping hand for the Bankies next shot on goal as a vicious bounce put Lappin clear. however his first time turn and and shot were blocked by McGarrity for a corner.

Fisher swung in the corner with great pace, and the home 6 yard box was like a pinball machine as the ball clattered about everywhere. It was an unbelievable moment, but as the ball finally squirmed to safety, the away fans felt it was going to be one of those days.

After 55 minutes, Fisher made it a hat trick of missed chances as he bore down on the keeper after a reverse pass from Miller. Unfortunately, the winger took too long over his shot, and not for the first time Annbank's keeper made a great blocking save.

The procession of missed chances was becoming infuriating as Hailstones was next on the list. with an hour on the clock, Fisher delivered another fantastic cross to the back post, but Hailstones, with all the time in the world, headed poorly past the post

With time wearing on the chances became fewer, as Annbank broke up the play and received several yellow cards for their efforts. Soutar, Proctor, and Jack were all given twenty minutes to turn the match around

Annbank, who had done virually nothing since the 17th minute, then began to get a chance or two as the Bankies poured men forward in the closing stages. Hyslop sidefooted over from twenty yards with 8 minutes remaining.

There was still time for Clydebank to miss another great chance as Proctor found himself in space around twelve yards out on the right hand side of goal. But emulating, his team mates he made a real hash of it and put the ball wide

In injury time, the Bankies may hay have been given a penalty as Docherty was felled in the box. However, the ref who was only a few yards behind and had a great view of the incident, unbelievably looked to his far side linesman for guidance, and ended up giving nothing

United had one last chance to seal it, with a two against one breakaway. Hyslop should have scored, but Corr did well to block.

At the time it felt like a disappointing performance, but on compiling this report it could have and should have been a convincing victory. More of a disappointing result, than performance. However, points will have to be picked up soon, so that we can look ahead instead of over our shoulder.