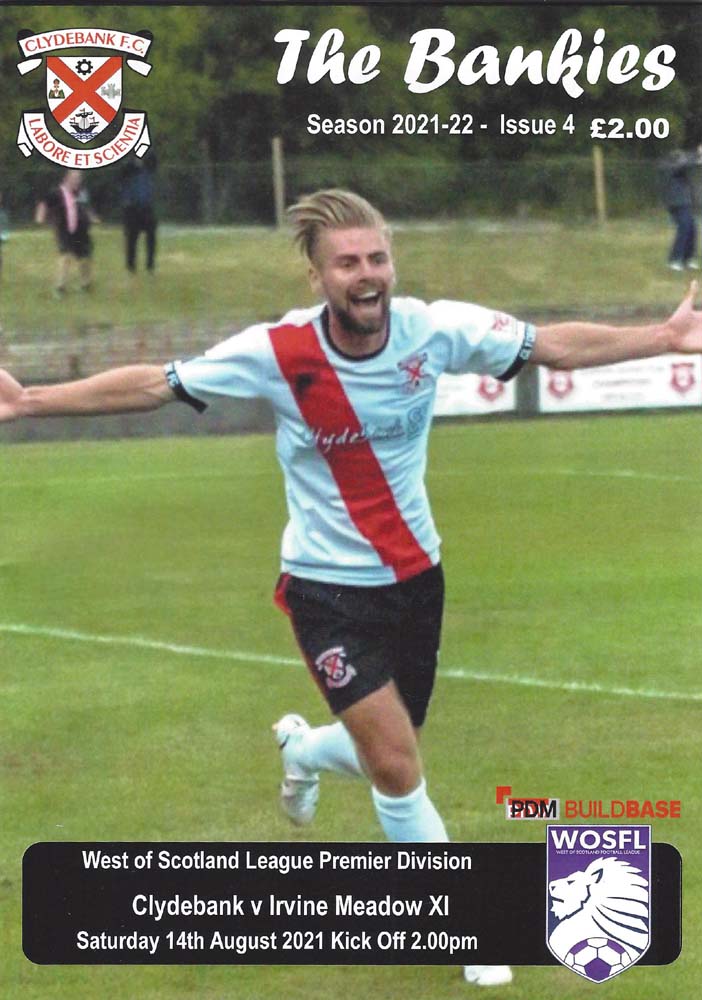 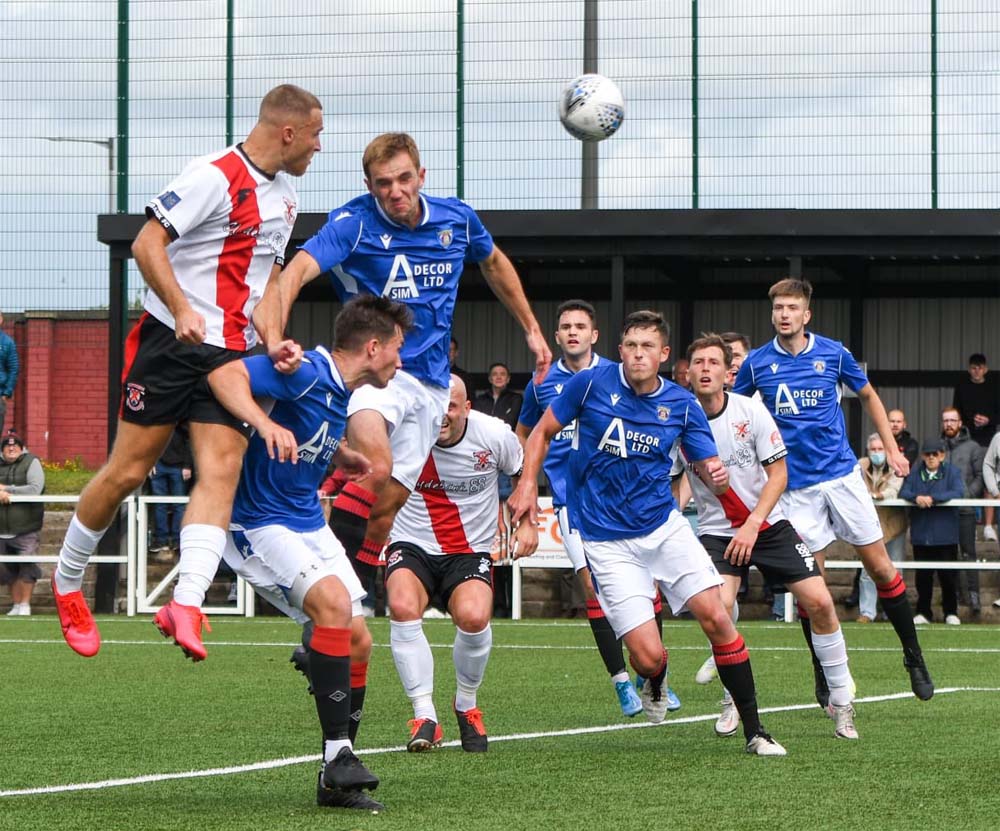 Nicky Little’s stunning free kick in the 5th minute of stoppage time was not only his 100th goal for the club (and what a way to get it), but also rescued a point against Irvine Meadow that they scarcely deserved. The Ayrshire side battled back from a goal down at half time to lead 2-1 and looked on course to take all three points until the late equaliser in a game that boiled over near the end leading to three red cards in the technical areas.

Matt Niven was missing due to his face knock in midweek, but namesake McLean returned from suspension to take his place. Nicky Little was also back after being rested at Kilbirnie, and Craig Holmes was added to the starting line up with McPherson and Lynass missing out.

Irvine Meadow posed an altogether different problem for the Bankies, and to be honest they were never really able to solve it. Meadow were the better team for large chunks of the game, though not massively, and Clydebank struggled to make any progress towards the visitors goal throughout.

When you face the better clubs in this league you better be ready to compete, because if you don’t you are in trouble. Meadow were quick to stamp their authority on this match and were dictating terms early on. McLaughlin was first to have an effort on goal after 5 minutes when he side footed over the bar from 20 yards following an inside pass from Faulds.

Goalmouth instances were few and far between and it took the Bankies 26 minutes to have a look at goal when Bailey chested down a Little cross field pass and then sent in a 30yd effort in the right hand channel but was way off the mark.

As half time approached the Bankies were just about getting the better of things and managed to get their noses in front from a corner. A set piece looked to be the only way a goal was going to be scored at this stage, and it came courtesy of the head of Matthew McLean. He rose at the near post to glance the ball into the far corner.

The Bankies second half plans went out the window after just two minutes when Meadow equalised via the penalty spot. A free kick was floated into the box and Slooves got on the wrong side of Byrne, and he went down. It looked to be a bit soft but Byrne shouldn’t have let his man on his goal side. McLennan took the spot kick and hit it to Jamie Donnelly’s left hand side. The keeper did a great job to tip the ball on to the inside of the post, but his luck was out as it went straight back to McLennan giving him an easy tap in.

The Bankies never really got to grips with the game after this as Meadow were the more aggressive team, without particularly threatening the Clydebank goal. There was one decent chance for the Bankies, again from a corner. The back post cross was headed back across goal and made its way to Holmes. He had a good view of the goal but his balance was all off as he sliced the ball wide of the post.

Meadow were getting closer and closer and McLaughlin’s dangerous pull back across the six yard box had no takers, luckily for the Bankies, but with fourteen minutes remaining the visitors turned the game on its head. A lovely threaded ball was equalled by the timing of Jamie Martin’s run into the box on the left hand side. He drew Donnelly from his line and neatly rolled the ball under the keeper and into the corner.

Clydebank seemed to be out of ideas as the long unbeaten run looked like it was coming to an end. There was a lot of stoppage time to be played due to a bust up in the dug-outs that led to Gary McMenamin and a Meadow coach being red carded and this extra time allowed the Bankies to salvage a point.

Ciaran Mulcahy was fouled and the ref made a judgment call to say that it was just outside the box. With the clock ticking over into the 95th minute, Nicky Little struck the ball around the wall sweetly and just inside the post with Waters rooted to the spot. Another red card was flashed to Bankies coach Kirk Forbes for over celebrating the goal, and another four players, two from each side, were booked in stoppage time as the bad tempers from the sidelines spilled on to the pitch.

This match proved to be every bit as tough as expected. Despite there being four goals in the match, goalscoring chances were at a bit of a premium. Over the piece, Irvine Meadow may just have shaded it. The Bankies forwards struggled against the visitors defence. It was a little bit better when Mulcahy came on simply as he was one of the few forward players able to win an aerial challenge. Up until then we, too often, played into their hands with long balls that their defenders lapped up. At the other end, Meadow looked just a wee bit sharper and they certainly were buoyed with their equaliser. The second goal seemed inevitable and it was no surprise when it came. Credit where its due to the Bankies for eking out a draw when we looked beat. It was not a great performance all round and they will need to bounce back against Blantye Vics who will be awkward on their own patch.

As a footnote, it was also disappointing to see McMenamin (for the second time) and Forbes being ordered off. The management team have taken the club to a new level in terms of professionalism in so many ways in the last two years, but they are no use to anyone on the terracing. Hopefully lessons are learned here as we move forward.