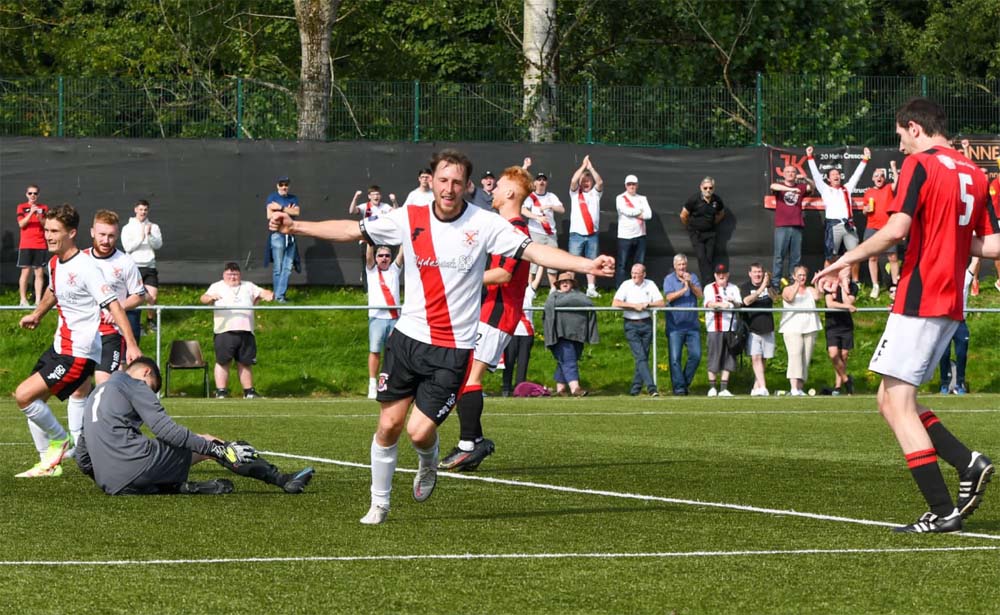 Clydebank’s comprehensive four one victory over Bonnyton Thistle at the Synergy Arena cemented the club’s 2nd placed position in the league. The Bankies and Auchinleck Talbot, the only unbeaten teams left in division, opened up a slightly larger gap on the chasing pack as results generally went their way.

Like most clubs, the Bankies are battling against mounting injuries and Covid related absences and this caused a goalkeeping crisis forcing Gordon Moffat to bring in experienced stopper Stevie McNeil, formerly of Petershill. Only six players who started against Darvel last week lined up for this encounter against bottom side Bonnyton.

The Bankies were expected to win this tie handsomely against the Kilmarnock based club, and the scoreline would suggest this to be the case However, Thistle had their moments when the game was scoreless and could have given the Bankies a real problem had they taken one of their chances.

Generally, Clydebank controlled the game and had a large amount of shots on goal throughout, and it took less than two minutes for the ball to be cleared off the line from a Darroch header.

The Bankies went on to test Bonnyton’s young keeper with some long range efforts, and despite the odd spill he watched most of them fly off target.

The Bankies were warned after 17 minutes when #10, who was the home sides best player, showed electric pace and drilled a shot at the Bankies goal, and only a terrific stop by McNeil kept the ball out. Two minutes later he was at it again leaving Hodge in his wake. This time he slid it across the box for #7 who had an easy chance at the back post, but he fluffed his lines and sliced the ball well wide of goal.

This caused the Bankies to step it up, and after 21 minutes Holmes hit a 20 yarder just over the bar after good work by Lee Gallacher. Then, Holmes missed an easy chance to put the Bankies in the lead when he latched on to a slack passback. With only the keeper to beat he tried to prod it past him when he probably should have taken it round him. In fairness, the young keeper did well to close Holmes down and save.

The Bankies continued to pepper the home goal and the breakthrough finally came after 30 minutes when Mr Goals himself Nicky Little crashed the ball into the net after being set up by man of the match Lee Gallacher.

Bonnyton were struggling now and it was no surprise when a second goal came after 39 minutes. A long ball over the top evaded the home defence and McKinlay neatly lifted the ball over the keeper and it dropped just under the bar and into the net.

A quick goal at the start of the second half would surely kill the game off, and McKinlay duly obliged just 50 seconds in, when he was put clear by Slattery and side footed home.

It has to be said after the third goal, the Bankies switched off a bit in the strong sunshine, rather than press home their advantage. It took a goal from Bonnyton to wake the players back up, and it was a cracking goal too. Again the #10 was giving Hodge a bit of a headache and the ball came back to Dempsie on the left hand side around 25 yards out. The full back curled an absolute beauty into the far corner beating McNeil all ends up.

The Bankies re-asserted themselves after this and could easily have scored another half a dozen goals. The main culprit was McKinlay who was desperately trying to get a hat trick. One chance in particular was when the Bankies had a three on one breakaway, and rather than do the simple thing and square the ball to a team mate he elected to shoot and sclaffed the ball wildly off target.

There was one more goal forthcoming before the end and it was from Joe Slattery. A long throw into the box was controlled with consummate ease, and it fell perfectly for him to stab it past the goalkeeper to make it 4-1.

In the end, the Bankies won this game pretty comfortably and sometimes when you are so dominant things can become a little complacent at the back. Bonnyton, had some threat and used it to the best of their ability, but Clydebank pretty much had things under control, though they will need to be more assured against better opposition.

Next week it is another huge game, when Pollok visit Holm Park. The Newlandsfield side are now in fourth place in the table after their fine win over big spending Darvel. This should be one of the Bankies best attendances of the season, and the difficulty of this task is shown that Pollok have won the last six matches between the teams. The incentive is huge for the Bankies as they could open up an eight point gap on their opponents.