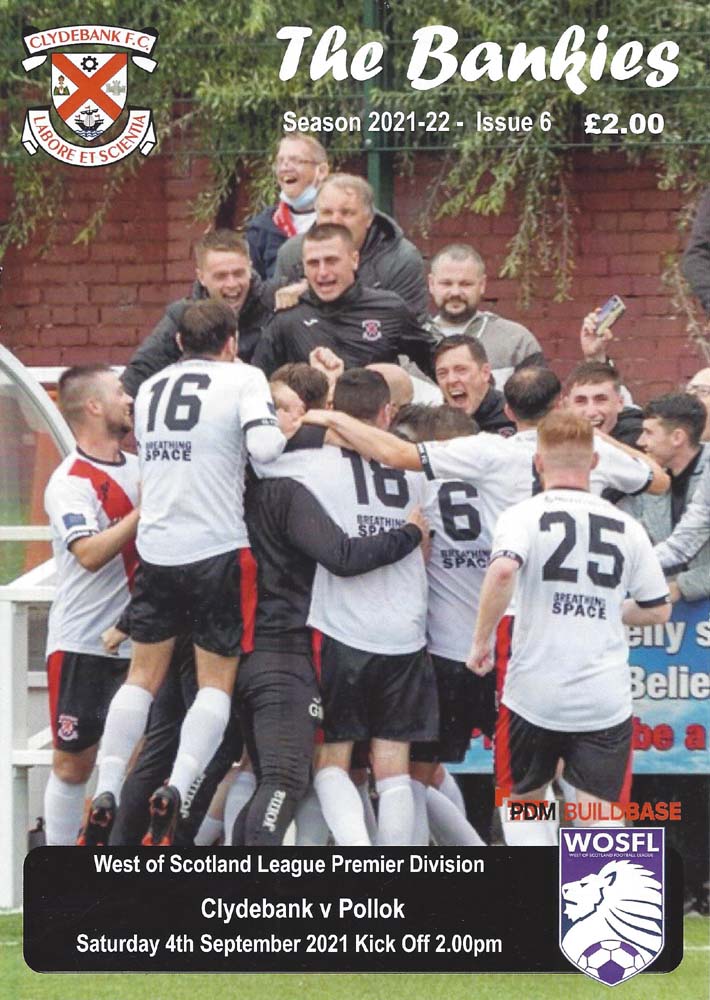 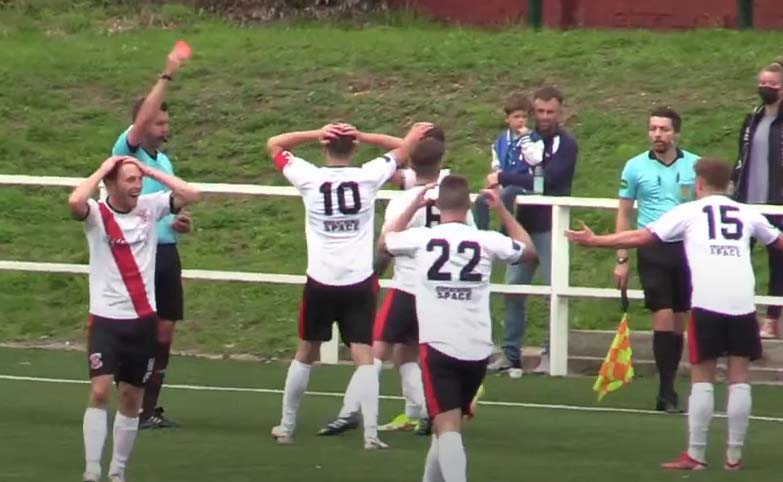 Clydebank’s long unbeaten run stretching back to March 2020 was finally brought to an end by Pollok as the Bankies went down 2-0 at Holm Park to their Southside rivals. Pollok deserved their win due to their first half performance, but were undoubtedly aided with an outrageous red card given to Frazer Johnstone at the start of the second half. I have the advantage of seeing the incident again, before writing this report, thanks to the brilliant work of BankiesTV and there is nothing that even merits a yellow card, never mind a straight red. Hopefully, the club will appeal this decision as it quite possibly cost the Bankies points in the title race.

The Bankies were slow out of the blocks yet again, and it has to be said that in encounters with all the top clubs so far with exception of Auchinleck, we have been bossed about by Darvel, Irvine Meadow and now Pollok. The Bankies have had to come from behind against all these teams, but this time with the ten men it was a bridge too far.

Despite, missing a few players through various reasons, notably Donnelly, Darroch and the suspended Green, the Bankies weren’t a million miles away from a normal starting line up. The main inconvenience was Hodge having to play in the centre of defence. The defence’s makeshift look wasn’t helped with an early injury to Bailey who had to be replaced by Hamilton loanee Fergus Owens.

Pollok made their intent known from the very first whistle. They were simply just busier in every department in the opening spell and the Bankies were nervy and putting nothing together. In saying that, the first minute shot from Wharton that forced a good save from young Stevenston was their only real chance at goal. They did, however, look menacing every time they went forward.

It was the Bankies who should have opened the scoring midway through the half when Lee Gallacher sent Hamish McKinlay through on goal. It took some time for him to get the ball under control and he never looked confident as he bore down on the keeper. He slid it past Longmuir but the ball went on the wrong side of post. In the context of the game, it was a dreadful miss and one that was to come back to haunt the Bankies barely two minutes later.

The goal was a bolt out of the blue as Grant lifted the ball beyond McHugh for Weir to run on to. From a fairly tight angle, he crashed the ball past Stevenson to put Pollok in the lead.

Pollok were well in charge and could have twice added to their score before the break. Fraser latched onto a throw in from the left and his hook shot on the turn brought out an awkward looking save from Stevenson, but the second chance was a real let off. An in-swinging free-kick was met be the head of Weir, and the glancing effort narrowly went past the keeper’s left hand post.

The Bankies started the second half in a much more determined fashion, and were given a free kick around 25 yards out. Gallacher took it left footed, and lifted the ball up and over the wall, but Longmuir was down smartly on his left to turn it away for a corner.

However, Pollok nearly undone the Bankies again with an aimless clearance up the park as it went straight into the path of Weir. He shot at Stevenson from an angle. The keeper couldn’t hold the ball and it came back to the forward who stabbed it towards the goal, but Owens had raced back to clear it off the line.

The red card incident followed for Johnstone just minutes later. The Bankies midfielder pulled out of a challenge on Shaun Fraser. The Pollok midfielder went down easy, and Johnstone bent over to register his disgust at him. At the same time, Fraser motioned to stand up and their heads came together. That was it. There was nothing in it. There was no intended violence in the original challenge or reaction afterwards. The linesman is ultimately to blame here for a horrendous mis-reading of the incident.

Strangely, the Bankies played better with ten men. Perhaps, Pollok thought they could contain and counter. Clydebank maybe feeling a bit hard done to started to make a few chances. None were better than Hodge’s header over the bar from close range following a Gallacher free kick. He just seemed to get a little under the ball, and it rose all the way.

Moffat deserves credit by trying to positively affect the game. Firstly, by throwing on two wingers and changing to three at the back, and then as time started to run out moving Niven from defence into attack.

It almost paid off as well. A long free kick by Stevenson ricocheted about on the box. Owens mis-hit a shot goalward, then Niven helped it on past the keeper but a defender was there to clear it off the line. Unfortunately, Niven just didn’t quite get a hold of the ball properly.

With Bankies throwing everything forward they were caught out deep in injury time. Weir nodded on a long clearance to Forde, who quite superbly curled the ball round Stevenson from the edge of the box to wrap it up.

Putting the red card to one side, It’s hard to put your finger on why the top teams are dominating the Bankies so much in these games, particularly in the first half. Obviously, the standard of opposition is just that bit superior, and to a certain degree you have to accept losing to a better team on the day. I thought at the start of the season we were maybe a player or two away from making a concerted challenge for the title, and maybe some of these performances against the top clubs are confirming this. There is a long way to go, and I don’t think we have truly seen the Bankies hit top form yet. Hopefully, the loss will not affect the players greatly, and they can re-consolidate for next week at Cumbernauld.