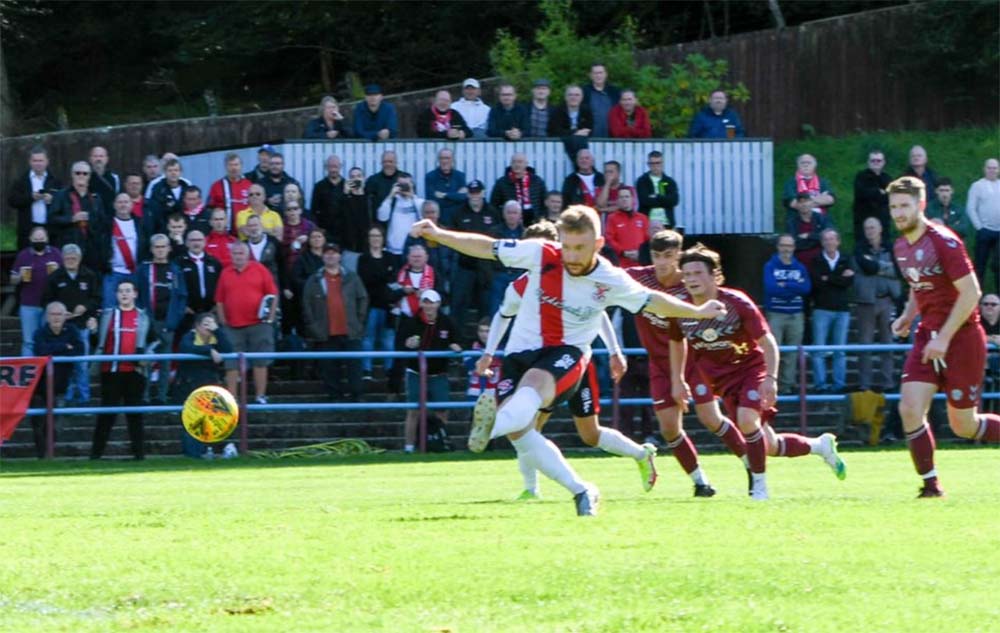 You can file that one under Routine. The Bankies had no problems against a Cumbernauld side that were a shadow of the team that turned up at Holm Park in July. The Bankies scored twice through a Lee Gallacher penalty and a Hamish McKinlay strike early in the second half. No one would have grumbled if the Bankies had scored a couple more but it was just good to get back to winning ways after losing to Pollok last week.

The Bankies are still a good way from putting out a full strength team. No Donnelly, Darroch, Mulcahy, Bailey or Black available, and Nicky Little on Holiday meant the squad was a little stretched again. However, it was good to see Liam McGonigle on the bench and getting a run out towards the end of the game.

Cumbernauld were awful in the first period and barely got out of their own half. It was amazing that the Bankies only led 1-0 at the interval and that was from the penalty spot. The goal came from a dazzling run by Cammy McClair who waltzed past several men before being brought down by ex-Bankie Jordan Kennedy. In the absence of Nicky Little, the penalty duty fell to Lee Gallacher who stroked the ball into the bottom corner of the net.

Really, the Bankies should have had the game sewn up in the opening fifteen minutes if it wasn’t for some woeful shooting. Slattery, Byrne and McKinlay all belted the ball miles off target from decent positions. McKinlay’s effort was the poorest as he had been put through on goal, but a terrible first touch meant he never had the ball under control and was forced to shoot earlier than he wanted to, but was miles off target. He could be forgiven as the ball did hold up slightly on the Guys Meadow grass which is in an urgent need of a cut.

McKinlay had an even worse miss earlier in the match after eight minutes. It was compounded by the fact he had two goes at it. Gallacher crossed to the back post, and Hodge neatly returned the ball across the six yard box. With the whole of the goal to aim for McKinlay saw his first effort blocked and the rebound diverted for a corner. It just didn’t look like he made a good connection on the ball with either of the shots.

The second half was more of the same, though Cumbernauld did try to push up the pitch a bit to try and get themselves into the game, and to a certain extent they were doing a little better. However, the second goal on the hour mark finished the contest.

The Bankies were pressing high up the pitch and McClair forced a defender into a reckless passback which McKinlay intercepted. He didn’t look too confident from his earlier miss and he seemed in two minds on whether to shoot or try and take it round the keeper. The slight delay allowed keeper Forbes to close the angle down and McKinlay saw his first shot blocked. This time he got the rebound and put it past Forbes and the man on the line to increase the lead.

After this Clydebank could have added to their lead as several chances came and went. Slattery, McPherson, Holmes, McGonigle all had pretty decent scoring opportunities, but only Slattery forced a good save out of the keeper. For their part, Cumbernauld did manage a couple of efforts on goal from set pieces it has to be said as they created nothing all game. Clydebank’s young stand-in keeper Jamie Stevenson was equal to the task saving a header from Boyle and free kick from Harrison.

It was all very matter of fact and predictable today. Clydebank simply looked a level above their opponents, and despite never reaching the heights had more than enough to see the game out comfortably. It keeps the Bankies in second place in the league and the top four have opened up a little gap, though there are games in hand to be accounted for. Auchinleck continue to look unstoppable, but they have to play all six of their nearest rivals in the next eight league matches and this will tell us whether we have a title fight or a one way procession.

Next week the Bankies play in the Scottish Cup for the first time in almost 20 years against Dalkeith Thistle. It is a big occasion for the club, and hopefully the Bankies can get a good result and make a mark on the competition