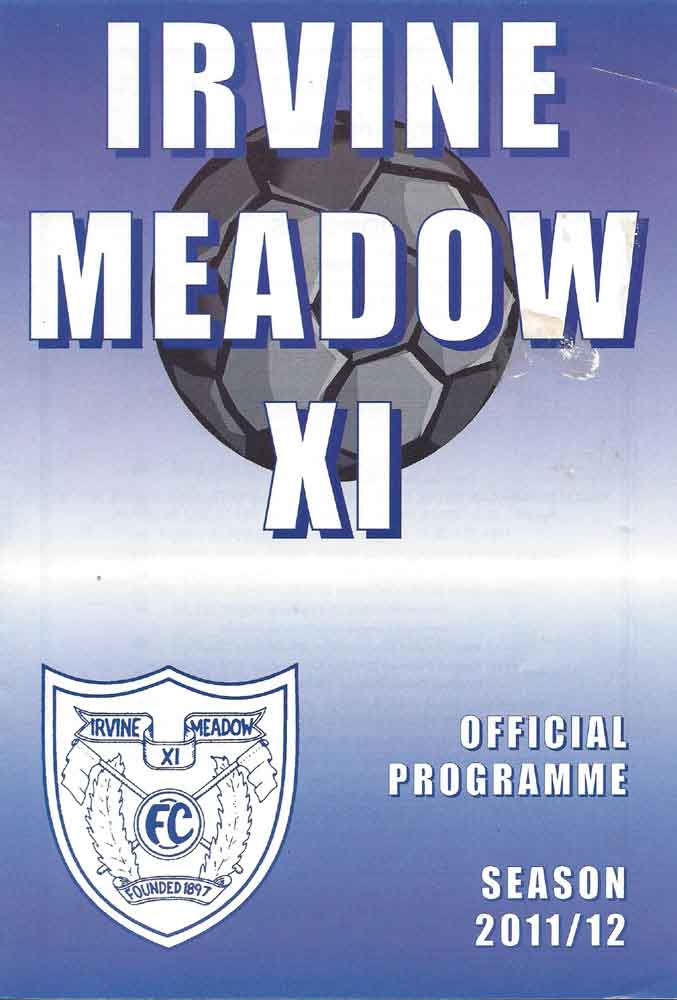 Clydebank were unlucky to come away from Meadow Park with nothing to show for their efforts after turning in a markedly improved performance from last week’s debacle against Ashfield. Last season’s league champions, Irvine Meadow, had taken a first half lead, but were hanging on at the end after the Bankies had pulled a goal back midway through the second period.

It was all change this week with news that three of the Bankies most experienced campaigners had left the club due to work commitments. Barry Crawford had been at the club for just over a season however Stefan Gonet and Paul Allum were the second and third longest serving players at the club and will be big losses. The Bankies eleven who took to the field only featured four players who were in the promotion winning side of last season, and the goalkeepers and defensive line up had none of last season’s players at all!

This disruption could not have come at a worse time, as the Bankies struggle at the bottom end of the Premier League. Once the game kicked off there was no sign of uncertainty with the Bankies comfortably containing Meadow. In fact the first effort at goal came from the head of Charlie Hobbs whose back headed flick looped over the bar.

The match really opened up when Meadow were awarded a corner after 11 minutes, from which Robert Hamilton made a superb reaction save after a Meadow forward was allowed a free header in the box. All of a sudden it was end to end stuff. A minute later a quick break upfield saw Paterson cross for Dymock whose off balance toe poked effort went wide. Then Hobbs showed great vision on the left wing to drag the ball back to MacKinnon at the edge of the box. The returning midfielder tried to guide the ball into the bottom corner, but it drifted wide of the goalkeeper’s bottom right hand corner.

Meadow upped the ante, and were rewarded with a goal after 21 minutes. Gary Fleming showed up John Greig’s inexperience by holding him off before rattling the ball past another of the Bankies’ youngsters Robert Hamilton to put his side one up. Meadow began to take control and Miller shot over with a decent curling effort. Before the Bankies could regroup properly they went two down from the penalty spot. In a good old-fashioned stramash at the edge of the box, the ball spun up, and the Bankies trialist appeared to put both hands on the ball. The referee immediately pointed to the spot and McDonald made no mistake with the subsequent kick.

With a two-goal cushion, Irvine Meadow sat back a little and allowed the Bankies back into the game. The trialist centre back almost made amend with a free kick ten minutes before the break. His curling effort was save magnificently by Wardrope who dived full length to his right hand side to tip the ball round the post. Meadow could have stretched their lead just before the break from corner kicks with the Bankies marking at these set pieces being rather suspect. Clydebank had Andy Paterson to thank as he headed David McGeown bullet header off the line.

The home side could have been home and dry just after the interval with two decent efforts. Strain found himself through on goal, but he lacked composure and crashed the ball into the side netting, then McGeown shot miles over the bar from the edge of the box after goalkeeper Hamilton hadn’t made the best of jobs of punching clear a cross.

That was really the best of Meadow, and they really disappointed for the rest of the match, as the Bankies more or less dictated play. MacKinnon set up Berry after 51 minutes, but he couldn’t dig the ball out from under his feet and shot weakly at the keeper. Then MacKinnon had an opportunity when he volleyed over the bar. The Bankies continued to look the more dangerous as Hobbs ran on to Paterson’s ball over the top. Unfortunately the angle was tight which allowed Wardrope to deal comfortably with Hobbs’ effort.

The Bankies finally got they goal they deserved, but it was to be a Meadow player who would score it. Berry chipped in an inviting cross from the left, and it’s quite difficult to know exactly what Dillon was thinking as he headed the ball into his own net.

For the remaining twenty minutes or so the Bankies really pushed the home side back, and they were really holding on to their slender league. Wardrope certainly wasn’t in any hurry to take his goal kicks.
The Bankies forced a series of corner kicks, but none of them really came to anything. For all the pressure in that time, the Bankies only had one real effort at goal and it was one that MacKinnon made for himself. Picking the ball up around 35 yards out, he skipped past two men, heading slightly to the left-hand side. MacKinnon hit a powerful left-footed shot from the edge of the box, but couldn’t quite wrap his boot round the ball, and it skimmed off the side netting.

The Bankies probably just about deserved a point, but life is tough at the top. Meadow will be pleased to take three points in match where they never really hit the heights. This leaves Clydebank in a precarious position already, with a crucial test coming up against Arthurlie at Holm Park next week. The best performances have been reserved for away matches, with no goals been scored at home so far There needs to be a dramatic improvement at Holm Park if the Bankies are to take steps towards surviving in this division.