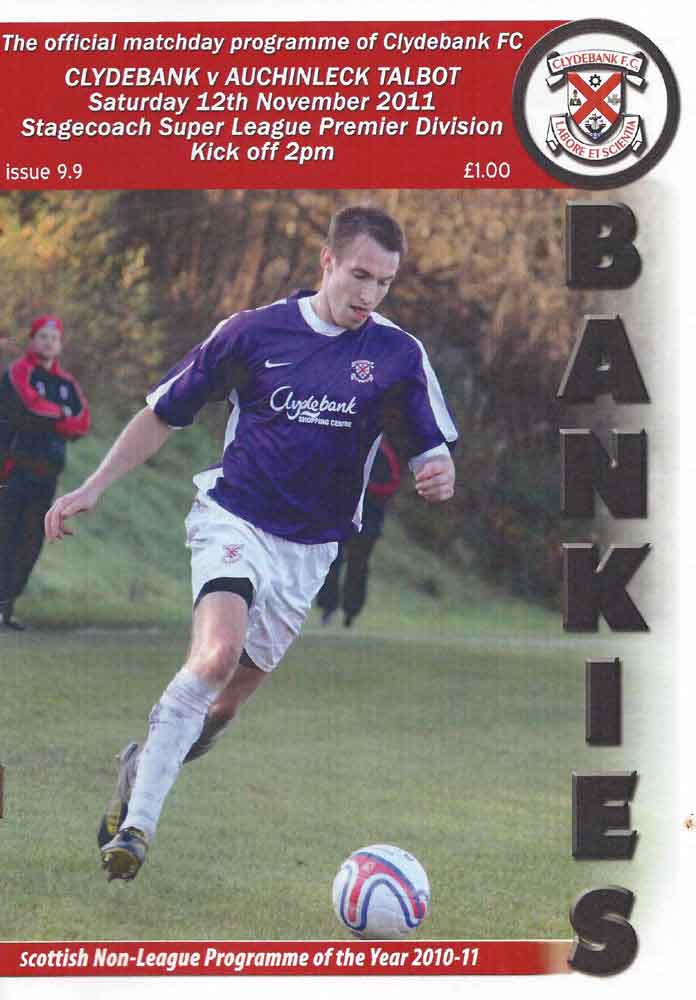 Clydebank hosting Auchinleck Talbot has been one of the most anticipated matches in the West Super Premier League, and a crowd of over 800 would suggest that this was the case. Talbot one of the most successful ever Junior clubs against a Clydebank side back from the dead in 2003, and now rubbing shoulders with the top clubs at this grade. It had all the ingredients for a cracking match, however as is quite often the case it all turned out to be a terrible anti-climax. There was certainly passion, aggression and effort, but a desperate lack of goalmouth action.

The goal attempts column wasn’t unduly bothered for the most part, but of those that did come along Clydebank were the side who had the clearest cut chances. It was the away side however who started the match in a positive fashion and easily dominated possession in the opening twenty minutes. Clydebank defended defiantly though, and Talbot only created one decent opportunity, which may have been their best, all afternoon. After nine minutes, a quick throw-in on the left-hand side was nodded inside to Young who with a good clean sight of goal proceeded to screw the ball over the bar.

It took the Bankies almost half an hour to register a shot on goal, and it should have been the opener. A fine move down the left hand side saw Berry square the ball to McPherson who the push it out further to ex-Talbot man Smith. With the goal at his mercy, he shot straight at Leishman who saved with his legs. The Bankies took heart from this and minutes later MacKinnon did well to retain possession before shooting straight at Leishman.

It was the second half before more goal action materialised, and again it was the Bankies with a quickfire double effort on the Talbot goal. Seven minutes into the second period Burns, who had come on for the injured McPherson, had a shot saved by Leishman, but it was Strachan who missed the best chances of the match only a minute later. MacKinnon drove into the box in his typical style and he unselfishly cut the ball across to Strachan. The Bankies wide man seemed to take too long to steady himself before pulling the trigger from twelve yards, and it wasn’t the best of shots and Leishman turned the ball away for a corner.

Both sides had long range efforts that didn’t amount to much before Berry had half a chance at the back post when he sliced a shot at the backpost. With time running down the Bankies seemed to be the more adventurous as Burns raced to the bye line and his attempted cut back to Dymock was just out of range. Berry retained possession however and set up MacKinnon whose shot was deflected off a defender for a corner. You can never count Talbot out at any time and they almost stole the points in injury time., when Ross Campbell gave the ball away. A series of cross-field passes ensued and a cross to the back post was almost volleyed in to the net, but luckily floated away from goal.

There were, not surprisingly, nine bookings in a match where no quarter was asked or given. It was a full blooded competitive Scottish Junior football match with both sides guilty of over exuberance, and a draw was probably a fair result. The Bankies are now half way through their Premier League campaign with eleven points from eleven matches. History tells us that a repeat performance in the second half will probably not be enough to avoid relegation, therefore the quest to pick up more victories must begin next week at Saracen Park against Ashfield