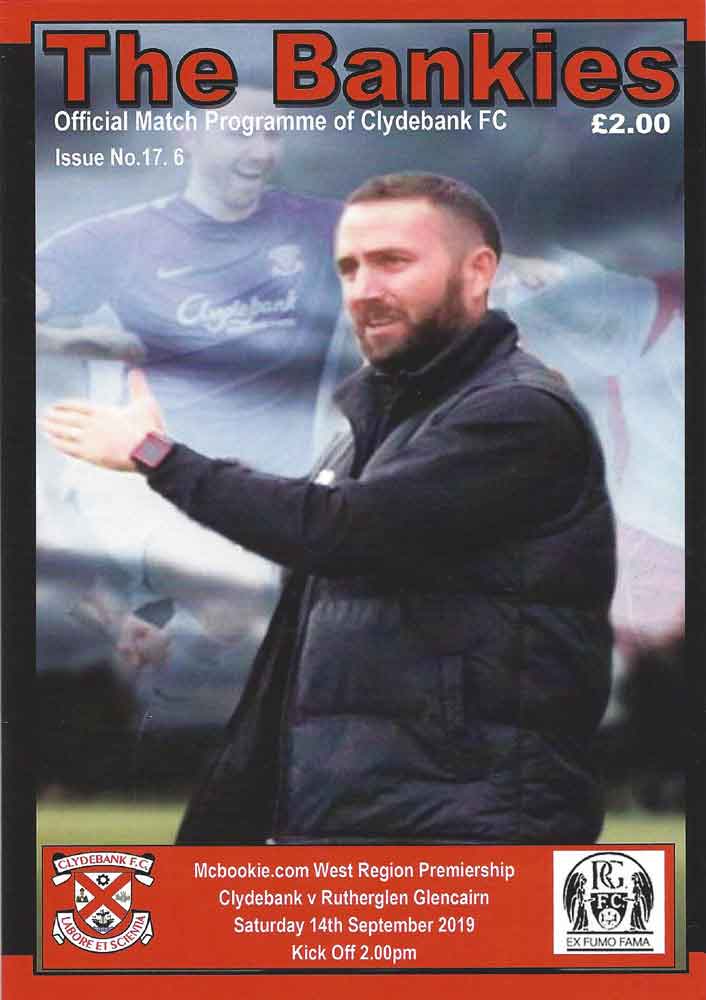 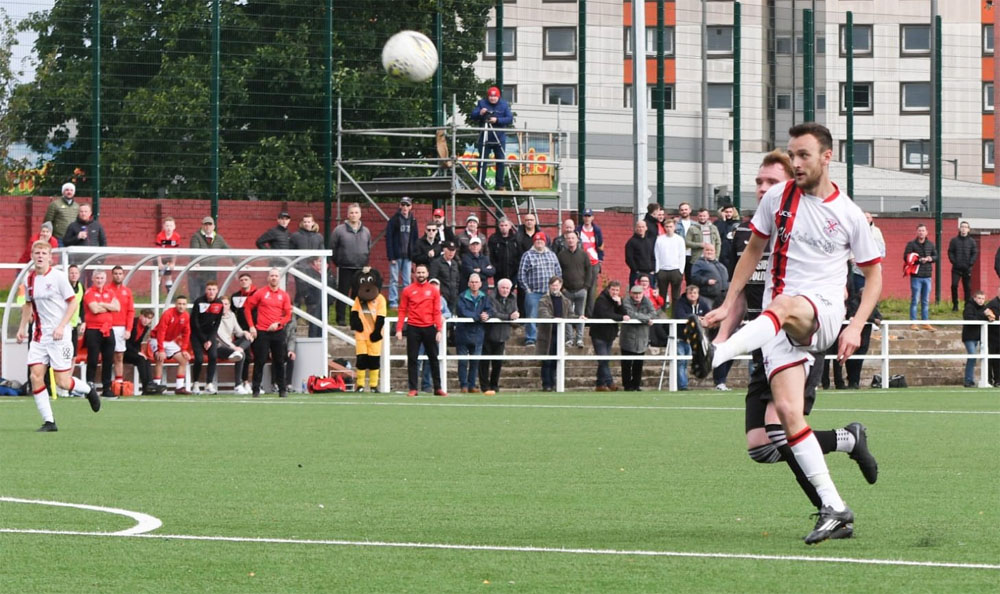 Clydebank climbed into the top half of the league for the first time this season with a fine 5-2 win over struggling Rutherglen Glencairn. The Bankies made it four wins from the last five with quite possibly their best performance of the season, but defensive errors continued to leave a cautionary note behind that will surely be a priority for new manager Gordon Moffat.

There was only one change from the side that won down at Glenafton the previous week with Kyle Munro coming in as a straight replacement for Cammy McClair. It was evident straight away that there is a new regime in place at Holm Park as Nicky Little was pushed much further up the pitch and the ball was being moved quickly and sometimes more directly which the players seemed to enjoy.

However, the spectre of defensive errors was in evidence again as the Bankies gifted Rutherglen the lead after just 12 minutes. A harmless looking punt up the pitch was completely mis-judged by Matt McLean giving Gormley a clear run in goal. Marc Waters was unlucky as he managed to get a hand to the striker shot but he could not keep it out of the net.

Clydebank’s response was as positive as anything we have seen this season as they buckled down and took the game to the Glens. Shelvey clipped a header just wide of the far post within a minute of going behind, then Rowan fired a loose ball over the bar from 25 yards out.

McLellan, in the away goal got a lucky break minutes later when he made a bit of a hash of a Munro free kick. The ball spun out his grasp and hit the post but luckily for the keeper the ball returned directly back into his arms. Shelvey had another chance that he could have done better with before the inevitable equaliser arrived.

The goal came from neat build up play on the left side, when Byrne played a good early ball beyond the Glencairn defence. Shelvey, using his pace, got there first and calmly lifted the ball over McLellan’s head, bouncing once before crossing the line.

The Bankies almost undid their good work straight away. Another harmless looking ball was crossed to the back post where Bailey was standing alone. The ball seemed to ricochet off the defender and almost went in the back of the net but for the alert Waters who scrambled across his line to push the ball away.

Play immediately returned down the other end and as the pressure built the Bankies took a deserved lead after 37 minutes. It was a brilliant team goal with the players using the surface for all it was worth. It ended with Shelvey sliding a perfect pass to Black who raced into the box and prodded the ball beyond the helpless McLellan.

This should have been the platform for the Bankies to take into the second half, but instead they found themselves back on level terms two minutes before the interval due to another mistake. Matt McLean attempted to shepherd the ball out for a goal kick, but he was dispossessed in his attempt to do so. As the forward raced towards the goal Byrne appeared to bundle him over and the ref pointed to the spot. Gebbie made no mistake with the penalty sending it high into the net well out of Waters reach.

Clydebank had worked hard for their two goals but had given two away at the other end. However, the fans had to wait only 45 seconds before re-taking the lead in the second half. A low corner from Munro into the box took a slight deflection which carried the ball to the edge of the box. Jamie Darroch was perfectly placed and absolutely leathered the ball into the net.

Clydebank went on to put on a fine counter attacking performance. The Glens did their best to try and push up on the Bankies and sometimes carried a bit of threat around the box but they never really created anything of note other than a header from a free kick on the left that sailed over the bar.

The Bankies on the other hand made a lot of good openings with pace, and directness that we haven’t seen enough of recently. The full backs were joining in the attack which is another area that has been muted this season. Bailey, in particular, had his best game of the season.

Another player on form is Jordan Shelvey, and he looked dangerous all game. The only surprise in this game was it took until eleven minutes from the end before the game was put to bed. Conor Lynass was the troublemaker, beating a player on the left wing, cutting inside and driving a shot at goal which McLellan could only palm away to the edge of the box. The ball came to Shelvey at the edge of the box and he showed fine technique to net first time for his fourth goal in the last three matches.

Nicky Little tied things up at the end with the fifth goal when Shelvey did well to win the ball deep in the Glens half. He put Little through on goal and the Bankies top goalscorer doesn’t often miss chances like that and he duly obliged again.

From an attacking point of view there were a lot of things to enjoy about this match. Any number of players could have been contenders for man of the match. Both full backs were excellent, and the midfield duo of Black and Rowan were very good. Black put in an incredible shift up and down the pitch, and Rowan used the ball very effectively. This allowed Shelvey and Little to do what they do best and it was all very evident today. The ball was moved quicker, and the players seemed to respond well. At times, we saw players flooding forward in attack, getting bodies in the box which made for an entertaining match as well. However, it’s far from perfect. The mistakes at the back have to minimised. We have to stop giving elementary goals away although Jamie Darroch was his usual solid self, and Marc Waters has been much improved in the last two week. A big test now awaits at Pollok next week at a ground we haven’t won at since 2014.