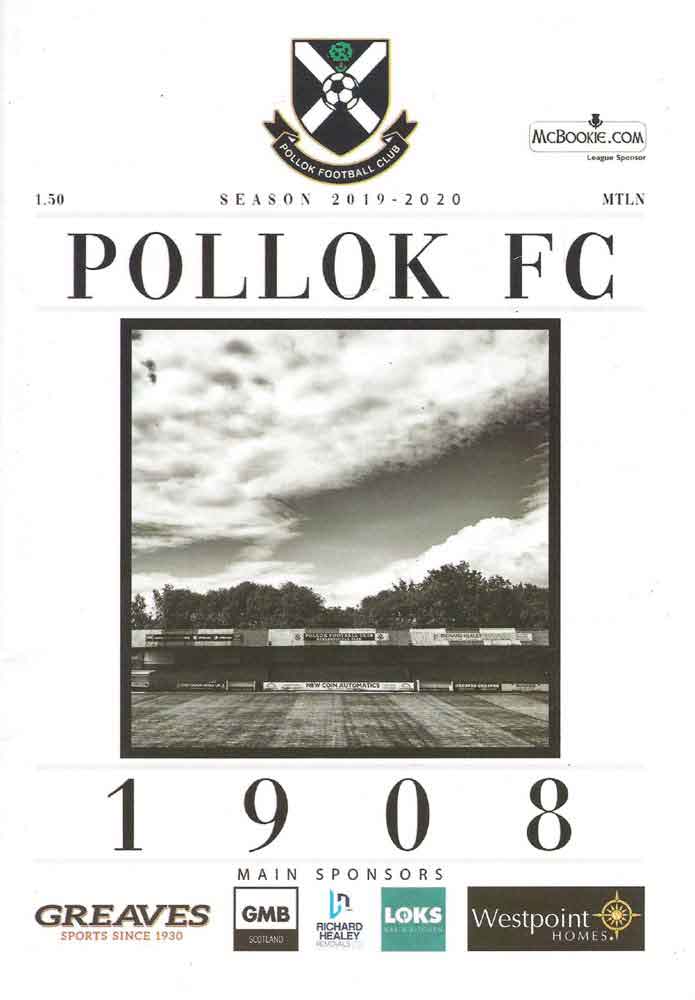 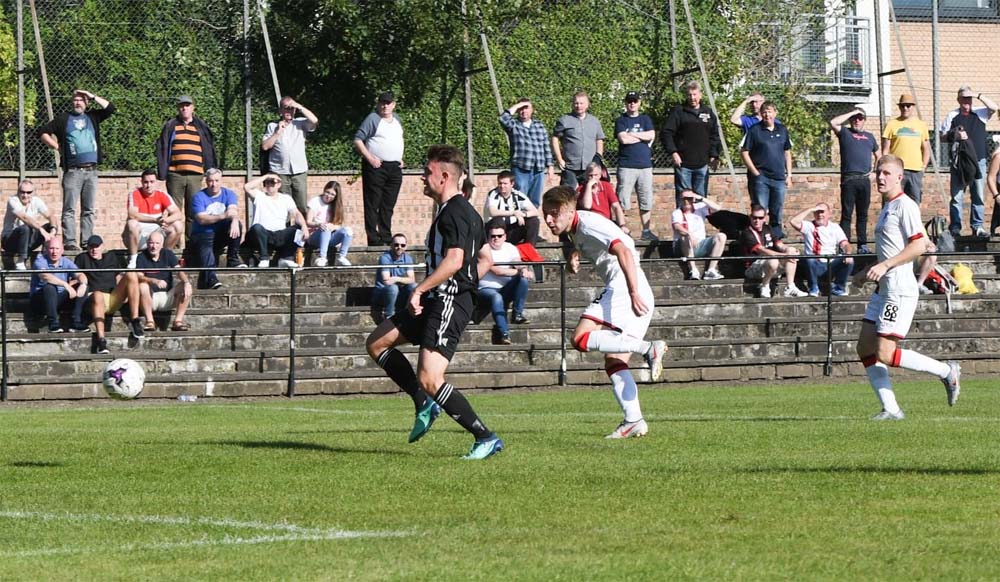 Gordon Moffat tasted defeat as Clydebank manager for the first time as Pollok edged out his side by the odd goal in three at Newlandsfield Park. It must be said that it was a most undeserved defeat as League leaders Pollok created virtually nothing for the whole ninety minutes but were the beneficiaries of two softish penalties which were expertly converted by Chris Dallas.

There was only one change from last week with Cammy McClair coming in for the absent Conor Lynass. Assistant manager Gary McMenamin who has also signed on a player took one of the substitute spots.

It’s not often that the temperatures nudge the 25 degrees mark this late in September, but this is what the players had to contend with. It seemed to suit the Bankies better as they created an opening within 20 seconds, but Jordan Shelvey was maybe a bit unprepared as he dribbled a shot wide.

It was all Clydebank in the early stages and Shelvey tried his luck with a 25 yard shot which stung the palms of Ex-Bankie Josh Lumsden in the home goal. Pollok did slowly work their way into the game, but had no penetration in the last third thanks to some confident defending. This allowed Clydebank to be the more dangerous of the two sides and Chris Black also tested the Pollok goal with a long range effort.

After the half hour, the Bankies stepped it up and twice in the space of a minute tantalising cut backs across the Pollok goal were just out of reach of Bankies forwards. However, minutes later Clydebank should have taken the lead with the first proper clear cut chance of the match.

A mix up between two Pollok defenders allowed Kyle Munro an angled run in towards the Pollok goal. He never looked entirely confident as he was closed down by a Pollok defender, making him take one touch too many and finally hitting a poor shot that dragged past the post.

Pollok finally had a shot on goal after 44 minutes when a dinked forward pass was chested down by Dallas to Esplin at the edge of the box. The midfield hit a low strike first time which was around a foot wide of Waters left hand post. Incredibly, as Clydebank looked forward to a well earned interval break they handed the initiative to Pollok by giving away a stupid penalty.

A diagonal through pass found Fraser out towards the corner of the penalty box. The ball was going out wide and with Byrne in attendance there didn’t seem to be too much to be worried about, however Waters came barrelling out of his goal and his hesitancy allowed Fraser to leave his leg in and theatrically tumble over it. The ref, of course, awarded the spot kick leaving Waters to think about another error of judgment. Dallas took the penalty and blasted it high into the net with the last kick of the half.

As expected Pollok didn’t play as bad in the second half and Clydebank not quite as good however the Bankies were overall the better side. The home side did come close on a couple of occasions early on with the pick being a dangerous cross from the right skidding off Dallas’ head, which deflected to McCann at the back post, but he kind of stumbled over the ball as he ran it wide of goal.

It wasn’t long before Clydebank were creating more trouble at the other end. Lumsden made a top class save from Chris Black who met a free kick at the far post. The keeper touched the ball superbly onto the bar and was quickest to react to the rebound by hooking it away for a corner kick.

Clydebank’s persistence paid off by grabbing the equaliser on the hour mark. Possession was won as Pollok piled forward. The ball was played to Shelvey who broke quickly. With the home side short handed, the Bankies striker drove into the Pollok half and picked out the supporting McClair who slammed the ball low and hard past Lumsden on his right hand side for a great goal.

At this stage, it looked like Clydebank would go on to win the match, and just minutes later the vital second was nearly scored. Bailey dinked the ball into Nicky Little at the edge of the box. The forward who was having a quiet game came to life as he chested the ball down and hit a first time shot that beat Lumsden but passed the post on the wrong side by a matter of inches.

Midway through the half, both sides were starting to feel the heat as the players started to look a bit leggy and the game lulled. However, this was broken in the 73rd minute when Pollok regained the lead, and again it was from the penalty spot. A cross from the right drifted harmlessly wide, but the ref spotted an infringement which wasn’t clear to see. It transpired that Rowan had held back a forward who had got on the goal side of him. It appeared to be a soft award, but in fairness there didn’t seem to be a lot of complaining going on. Dallas took the kick again and drilled it past Waters who was rooted on his line.

Clydebank didn’t look like they had the energy to retrieve the deficit, but Nicky Little had two very good opportunities to grab a share of the points. The first was from a long clearance from Waters on the right hand side of the box. The ball dropped over his shoulder and he hit a wonderful first time dipping volley which was inches over the bar.

The second was right at the death, when Little got his head onto a corner from Rowan at the back post. His connection was poor as he headed the ball downward into the ground from close range, but his luck was out as the ball bounced over the bar consigning the Bankies to defeat.

Clydebank will play much worse than this and win, so again the effort has to be commended. Considering Pollok are top of the league, the Bankies made them look very ordinary. Two silly penalties given away and a bit better decision making in the final third would have seen the Bankies win this match. You can already see a change in emphasis in the way the players are approaching games. The players seem to be responding to it positively, and hopefully once the manager starts to weed out some of the weak links and brings in his own players we will see where he can take this side.