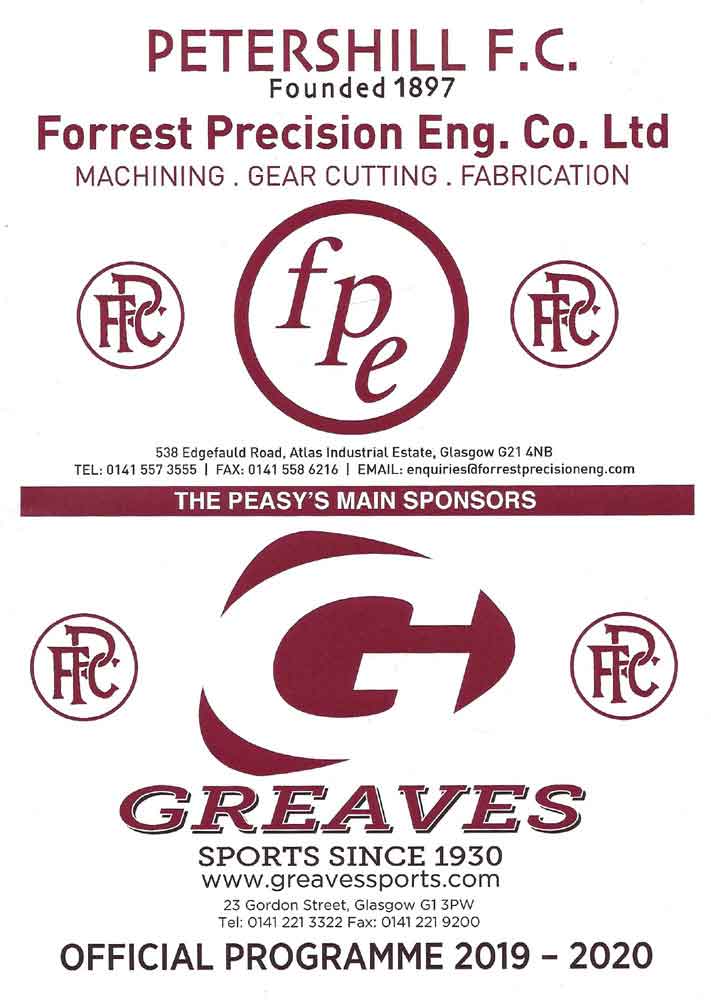 The Bankies crashed out of the Scottish Junior Cup by a single goal at lower League Petershill in what, at best, can only be described as an insipid display. Roddy Paterson’s strike just after the break was enough to knock a really poor Clydebank side out of the cup leaving the fans with not too much to look forward to for the rest of the season.

Before a ball was kicked it looked like the team selection was a bit dodgy to say the least. There was one enforced change with Liam Rowan absent. He was badly missed in the middle of the pitch and it is an area where we desperately need new signings. Gary McMenamin stepped in to the defence to allow Alan Vezza to cover for Rowan. It was understandable to see Jordan Shelvey brought back into the side and you would have thought at the expense of either McClair or Munro. However, Moffat went further – probably one change too many – by dropping both wingers and bringing in Hepburn. This seemed un-necessary considering the winning run the club have been on.

Clydebank’s first half performance was simply too casual. The players moved the ball about at a pedestrian pace that was all too apparent at the end of Kieran McAnespie’s tenure. Apart from a shot that McMenamin had from inside the box following a Lynass corner kick there was virtually nothing to get excited about in the opening half hour.

In fact, Petershill had the best two chances of the half as they grew in confidence. Paterson, who will be happy with his day’s work brought out a fine stop from Waters when he saved the ball with his fingertips from the strikers thunderous drive.

Then, ex-Bankie Josh Watt turned neatly in the box only to be denied by Waters again low on his left hand side, turning the ball away for a corner kick. The best the Bankies could muster in response was a Lynass shot from 25 yards that was easily gathered by Wilson.

Petershill shocked the Bankies barely a minute into the second half. MacLennan split the Bankies central defenders with a fine through ball. The ball was trailing out slightly wide to Paterson’s right but he rolled it diagonally past Waters who was dreadfully out of position. It has to be said that Waters undid his two good first half saves as he was massively over to his left hand side leaving the far side of the goal gaping which Paterson gratefully accepted.

Just five minutes later the Bankies almost went two down a long throw into the box was marginally too high for McMenamin and he could only help it on to the back post. MacLennan rushed in but unbelievably headed over from close range.

Where was the Clydebank response? There was nothing happening from the wide players, as Lynass was out of sorts, and Hepburn was proving why he finds himself coming off the bench late in games. The centre of midfield was not any better. Vezza was just mopping up and Chris Black was having one of those ineffective games he has now and again. Barring a Shelvey header from a set piece, which was well saved by Wilson, Clydebank were creating nothing from open play.

It was evident that the Bankies were in dire need of an injection of life, but Moffat seemed circumspect with his first substitution of the day and it took too long to be made. As it was Alexander came on for Black and this didn’t fill you with hope that this was going to turn the game around.

It took until the 79th minute for a good chance to come Clydebank’s way when Shelvey dispossessed Hardie on the left wing. He slid the ball inside to Hepburn, but he ballooned it over the bar from a good position

It was only later when Lynass and Hepburn were removed for Munro and McClair that things started to happen, but by then there was only ten minutes or so to go. Munro, in particular, started to worry the home defence.

With just eight minutes left, Clydebank finally started making in-roads. A fine passing move from Little and Alexander put Shelvey clear on goal but the striker having not of his best games mis-hit his shot when he had all the time in the world to pick his spot.

Munro then brought out a fantastic save from Wilson as he tipped his free kick over the cross bar as it headed for the postage stamp. Little, next, tested the goalkeeper with a curling shot that he plucked calmly from the air.

With Clydebank piling men forward Petershill could have buried it with a couple of late chances, but the home side comfortably ran down the clock against their disappointing opponents.

Petershill have been struggling all season, but they are a team who can never be counted out and the Bankies paid the price for this casual performance. It is a hugely damaging defeat as a run in this cup can make the season for a club like Clydebank who probably won’t be involved at either end of the league table. In my opinion Moffat made too many changes. I don’t think Hepburn merited a start and dropping both wingers was a mistake. We then had the perfect storm of the team just playing really poorly, and we took too long to make the changes to correct it. By that time Petershill were well dug in and fancied their chances. You can’t win or play well all the time, it is just a shame however that we choose today to do neither.