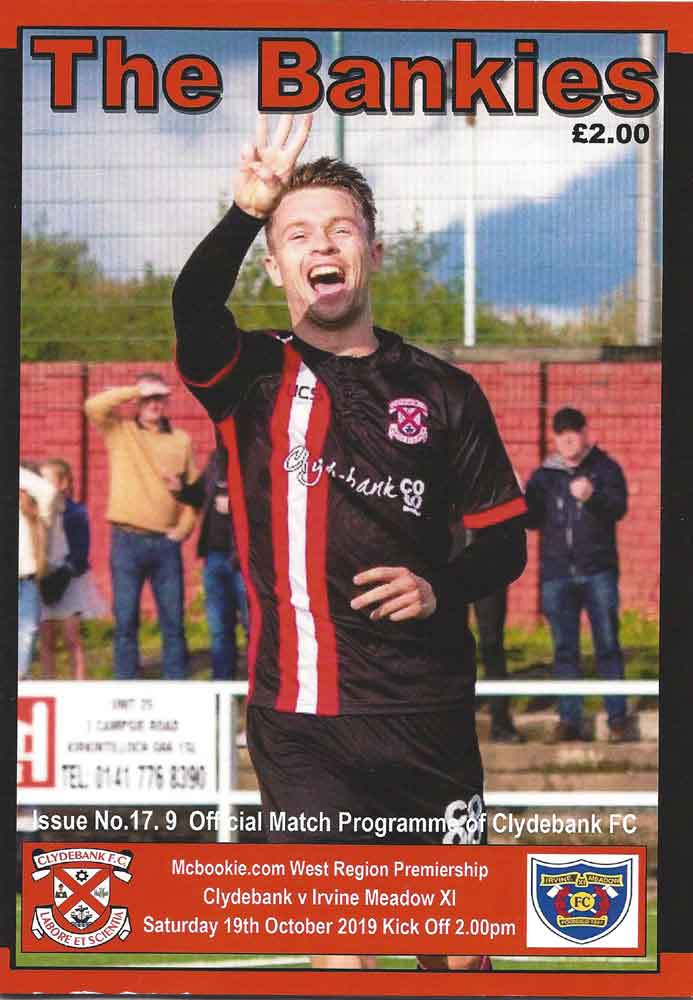 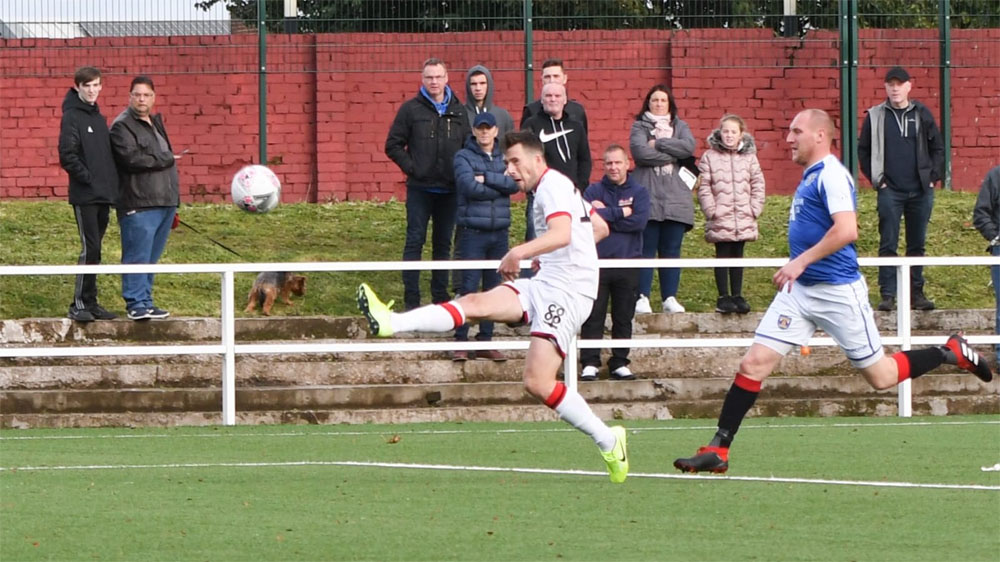 Two late goals from Del Hepburn and Nicky Little saw Clydebank move to within three points of the league leaders as they deservedly defeated a lively Irvine Meadow side. The match was over-shadowed by the ankle break suffered by Meadow captain Ben Carson that resulted in the game being stopped for almost half an hour.

Gordon Moffat resisted the need for any changes to the starting line up as the Bankies chased their fourth consecutive victory; however it was Meadow who started the brighter of the two sides. Clear cut chances were thin on the ground though, and a long range effort was the best the visitors could manage.

The Bankies were getting some joy early on from the long ball over the top and it almost resulted in a goal when Nicky Little chased down one such pass into the right hand channel, however his first time effort was just inches away from the junction of post and crossbar.

Meadow had a real up and at ‘em style of play, and you could see how some teams might wilt under their high pressure game, however the Bankies were working hard to keep them at bay. The visitors always looked dangerous from set pieces and were prevented from taking the lead when a long free kick into the box was diverted goalward at speed by Sharpe, but Waters instinctively made a tremendous save.

Meadow were probably enjoying the lions share of the possession, but it was Clydebank who were sneaking shots at goal on the break. Rowan cracked a decent effort over the bar, then McClair broke on the right and fed the ball into the box for Lynass who weakly shot past the post.

It was a high tempo, fast and furious first half with little goalmouth action and plenty of tension. You wondered whether Meadow could keep up that pace. The answer to that question was no as the Bankies quickly got to grips with proceedings once the second period began.

In almost a carbon copy of his first half effort, Nicky Little latched onto a long ball and went for the far post this time and it sailed narrowly wide. Five minutes later and a crossfield ball by McLean was delightfully knocked on first time by McClair for Rowan, but O’Neill was off his line in a flash to block the angled shot.

Just before the hour, McLean who was having a fine game raced forward with the ball, and slipped it out wide for Munro who delivered a great cross to the back post. Little met the ball with his head but missed the target when it looked like he could have done better.

Meadow were not nearly as threatening now, but still posed problems from set pieces and it was just shortly afterwards that Miller headed over from a corner kick, but it was down the other end where the real chances were being created.

With just over fifteen minutes left Munro penetrated the Meadow defence and laid the ball off for Nicky Little who prodded it through for Jordan Shelvey. Once again, O’Neill was off his line sharply and did well to turn the Bankies striker’s first time effort away for a corner kick. From the resultant corner there were two desperate blocks from Black then McLean as the Bankies chased the opening goal.

It was just shortly afterwards that Ben Carson suffered what looks like a badly broken ankle. From a Bankies attack, both he and Jordan Shelvey went for a 50/50 ball in the box, but in the process the Meadow captain sustained the horrendous injury that held up play for the best part of half an hour until an ambulance arrived.

On resumption of play, thoughts turned to whether the game would just peter out to a goalless draw. However, Del Hepburn had other ideas. Always an impact player from the bench, he picked up the ball and drove into the heart of the away defence. He shuffled on to his weaker right foot and let fly. The goalkeeper who had done no wrong all afternoon seemed to let the ball go through his arms and the ball struck the post and in all likelihood it hit him causing it to cross the line. One for the goals adjudicating panel!

The Bankies got a huge lift and doubled their lead just minutes later. A free kick by Rowan in the centre circle was sent to the back post. Jordan Shelvey rose magnificently to head it back across goal for Nicky Little who rammed it home from close range.

The ref added over six minutes of stoppage time, but Clydebank saw the time out comfortably. The Bankies continue to impress making it four wins in a row or eight in the last ten depending on how you want your stats to look. This was the first time that Meadow have failed to score in the league this season which speaks volumes for the Bankies defence. McLean and Byrne in particular deserve extra praise. Rowan had a great second half and Nicky Little worked tirelessly up front. Hepburn can always cause a problem coming off the bench as he did today, but what a difference Jordan Shelvey made. Ex Bankie Calum Gow was commanding at the back until Shelvey came on. After that Shelvey beat him in the air almost every time, and the two subs certainly contributed to the win today. Next week sees the Bankies travel to Petershill for a tricky Scottish Cup tie. The Peasey are not doing great this season in the Championship but they are always tricky opponents for the Bankies.