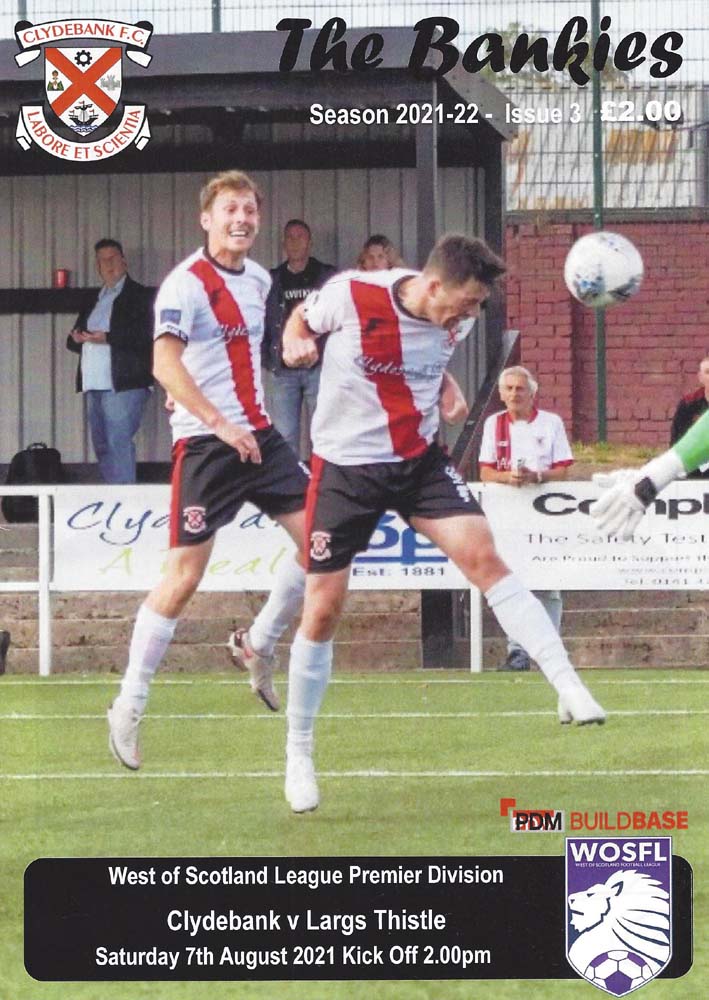 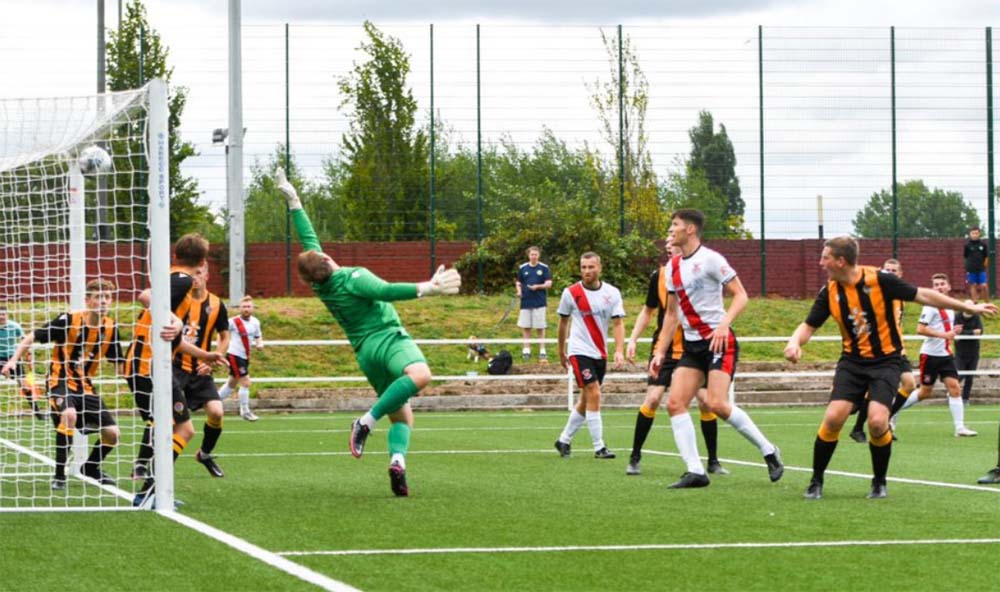 Matthew McLean’s needless sending off just ten minutes into the second half saved Largs Thistle from a real pasting at the hands of the Bankies at Holm Park. Cruising by four goals to the good at half time, Clydebank looked in the mood to add to their tally, but the red card changed the game after that. Largs managed to pull one back, and in the final analysis if you were offered a 4-1 win before the game you would have taken it.

Jamie Donnelly was missing with a thigh strain for this game, so young Jamie Stevenson made his debut after being on the bench for a long time. As we are now accustomed, Gordon Moffat made a number of other changes with Byrne, McGonigle and McKinlay starting in place of McHugh, Lynass and McPherson.

The first ten minutes of the game were fairly uneventful, but that all changed when Clydebank scored with the first meaningful chance of the match. Largs may well feel a bit aggrieved as they were temporarily down to ten men and were trying to get a replacement on the pitch. In the meantime, McLean slipped the ball forward to Slattery. A gaping hole was evident where the missing Largs defender should be, giving Slattery time to steady himself and shoot. McGowan got a good hand to it and should have done a better job than palm the ball into the net.

The Bankies went two up after 26 minutes. Just prior to the goal Matt Niven showed his worth in the opposition box by heading a Gallacher corner kick goalward, and McGowan made a great finger tip save for another flag kick. This time Gallacher's cross went to the back post and rebounded off Nicky Little’s shins to where Adam Scott was facing his own goal. In some kind of blind panic he lashed out and battered the ball high into his own net.

Clydebank became a little careless after this at the back and Sewell had a couple of chances,and it was good to see Bankies young keeper make his first meaningful save to keep the Largs score-sheet blank.

The game was essentially killed off with two goals in the last five minutes of the half. A free kick was given after a foul on McKinlay, and Nicky Little edged to one goal away from this 100th Bankies goal by curling the ball in off the far post. Again, the keeper wasn’t too clever, taking a step the wrong way just before the ball was struck.

Hamish McKinlay opened his account for the club just a few minutes later when he was completely unmarked in the box and headed home from a Byrne cross.

Clydebank came out for the jugular, and within a minute of the restart Slattery hit the inside of the post following a poor clearance. Then Nicky Little tried another spectacular long range effort that caught McGowan out, but just sailed wide of the post.

Then things went a bit awry. Just as the Bankies were really starting to put their passing game together, Matthew McLean tried an ambitious ball that was charged down by Sewell. The striker was able to race through on goal, and McLean whipped the legs away from him, earning a straight red card. Two things to say here: McLean might have been a bit unlucky as it looked like Niven was covering and in retrospect McLean should just have let Sewell shoot. If we were defending a one goal lead then by all means bring him down and sacrifice yourself, but with a four goal lead and the team playing well then it was an unnecessary thing to do.

The punishment was doubled as Largs inevitably scored with the resulting free kick which Ballantyne belted low into the corner of the net past Ballantyne.

The game changed completely after this. McHugh came on for McGonigle as the Bankies rightly decided to hold on to what they had. Largs tried manfully to get a further goal back, but Clydebank defended pretty well and other than the odd scare such as a free header for Adam Scott at the Back post which Stevenson dealt with easily, Clydebank comfortable saw out the last half hour.

There was one other chance worth mentioning and it came from a tremendous through ball by Slattery. It found Gallacher who jinked his way around Ross Love, then the goal keeper and a certain goal was only stopped when the big defender recovered and managed to block the ball on the line.

Who knows what the score could have ended up if Clydebank had kept eleven men on the field. It’s strange feeling a wee bit disappointed in only winning 4-1. Make no mistake though; this is a great result for the Bankies. A scoreline like this has been building in the last few weeks. It means we move up to third place in the league and it is getting a bit congested up there now. The top four or five clubs will all start to meet each other shortly and it’s great that the Bankies are in the mix.

Clydebank travel to Kilbirnie in this coming midweek. The Ayrshire side have lost all seven league games and are now managerless. This is as big a banana skin as you are likely to see, and its so important that the players remain focussed and continue this great run of form.