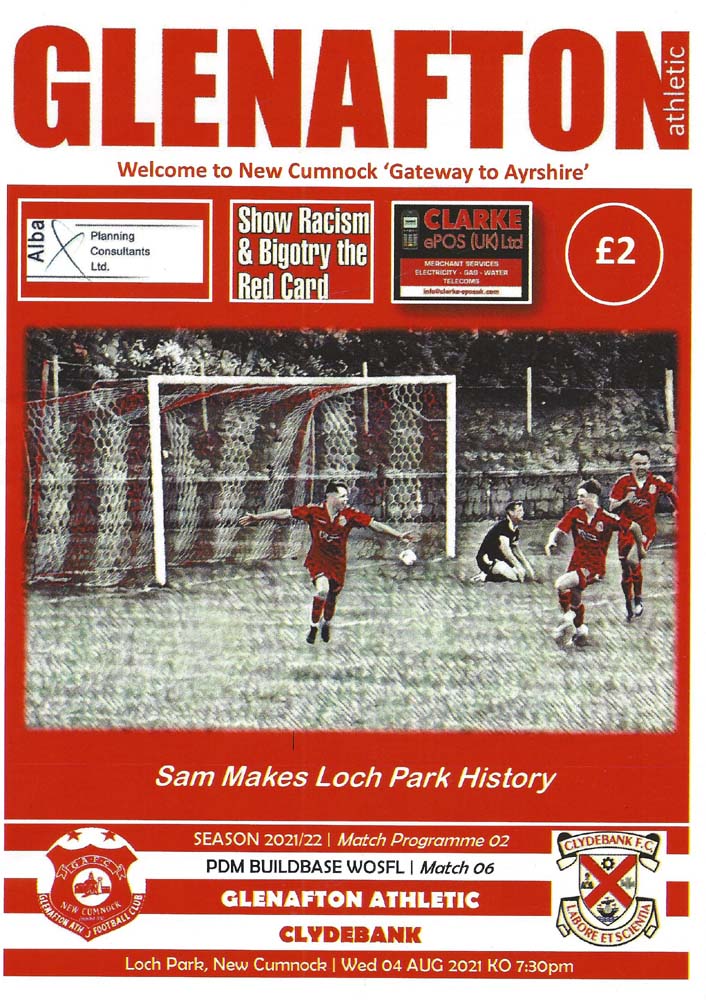 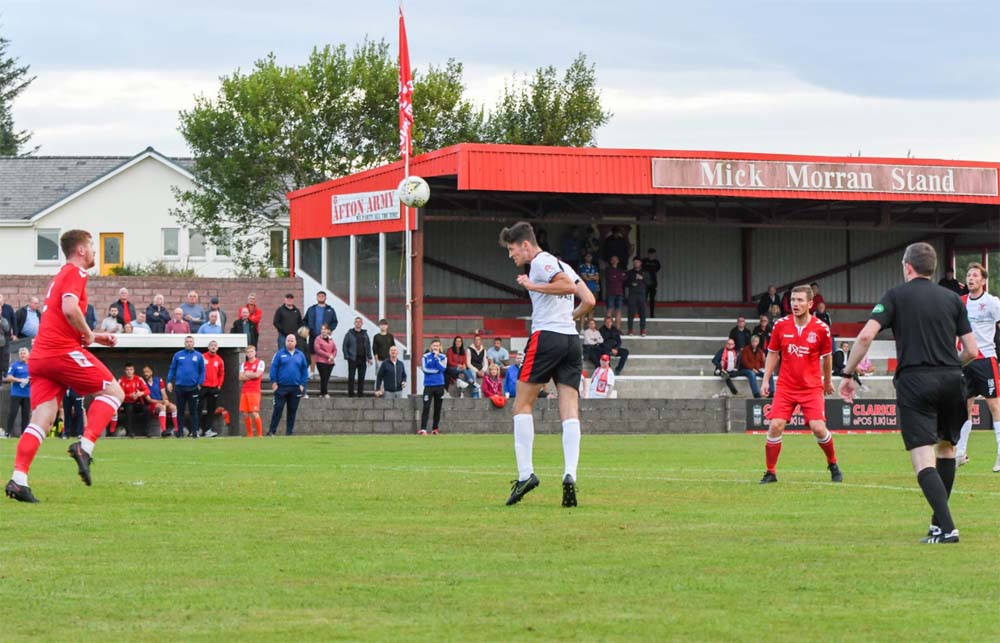 Clydebank leapfrogged Pollok and Hurlford in the league to move up to fourth position after a fine 3-1 victory over Glenafton at Loch Park. Despite falling behind to an early goal, the Bankies fought back with strikes from McPherson, Niven and McClair to remain unbeaten after six league games.

Gordon Moffat and his staff continue to switch the personnel about with a few changes to the line up. McLean and Green were both unable to play and were replaced with Niven and Darroch whilst Ross McPherson started in place of Hamish McKinlay who was on the bench.

Loch Park is probably about the furthest journey for the Bankies to make in the league this season, and despite it being a 7.30 kick off it was quite tight coming through the rush hour traffic for many to get there on time.

Maybe, this partly explains why the Bankies were caught on the hop, and found themselves a goal down with little over a minute on the clock. A quick break down the left wing saw the ball driven across the face of the goal to the back post. It looked like it might evade everyone but the lanky frame of Ryan Jordan stretched low and he directed the ball into the roof of the net.

It took the Bankies a while to get their bearings after this early shock, but after eight minutes they almost found the equaliser. A fine Lynass cross from the right wing was blocked by McPherson at the back post and the ball broke for Nicky Little. From six yards it looked like he couldn’t miss, but somehow his shot was deflected for a corner kick.

Just two minutes later parity was restored when Ross McPherson scored his first goal of the season. The ball was worked nicely out to the right flank to Slattery who delivered a fantastic cross to the near post. McPherson got across his marker and bravely bulleted a header past Johnson giving him no chance.

Clydebank’s play was patchy throughout. There were good moments and some not so good. After drawing level, the players seemed to go into their shell and handed the initiative back to Glenafton. After 24 minutes, the home side almost went back in front as the Bankies defence failed to clear the ball properly and it dropped to McChesney in the box. The big defender crashed a shot on the volley that Donnelly did well to beat away.

The Bankies responded moments later and Lee Gallacher had a 25 yard shot that he hit first time. He showed great technique to keep the ball down and it worried the goalkeeper enough as he spilled, but managed to smother it at the second attempt.

The Bankies stepped it up in the last five minutes before the break an had an incredible miss. Lee Gallacher did superbly well to burst through the Glenafton defence on the left hand side. As he hit the bye-line he drilled the ball across the box to Ross McPherson giving him an open goal. The striker fell over as he met the ball just a couple of yards out, however it spun up and hit the crossbar. It wasn’t over as Slattery raced in to finish off the rebound but he managed to belt the ball over the bar with the goal at this mercy.

Right on the stroke of half time, Clydebank did get their noses in front. Matt Niven was the scorer. It is handy having a tall guy in your side, but even better when the score came from a well rehearsed corner kick. Niven spun away from his marker and found himself alone at the back post, and from 10 yards out he placed a perfect header high into the net well beyond keeper Johnson.

The expected initial surge from Glenafton at the start of the second half never really materialised, and there was very little goalmouth action until the 58th minute when Darroch headed over from a corner.

As time wore on the home side certainly started to press a bit more, but were well marshalled by the Bankies defence. A half chance for Little was blasted over the bar, and then an inviting cross by Slattery had no takers.

It was the double substitution from Glenafton that finally opened the game up and it almost paid dividends straight away. A cross from the right wing was slipped back across the box for the in-rushing McIlroy. The former Auchinleck man side footed the ball over the bar for what was Glenafton’s best chance of the match.

Clydebank found themselves under a fair bit of pressure towards the end but apart from dangerous free kicks and corners which were well cleared, Donnelly never really had a proper save to make. If anything the Bankies looked more likely on the break.

The Bankies subs were all involved in the last ten minutes. Competition for places will and should make you up your game, and McClair did himself no harm as he burst through the Glenafton rearguard, and took the ball around the keeper. However, his glory was stolen by McKinlay who took the shot away from him and with the whole goal to aim for he missed a real sitter by blasting the ball off a defender’s legs.

McKinlay made up for this in the 5th minute of injury time when he harried full back Cairns into a mistake. Chris Black was alert to the situation, and ran onto the ball and at the byeline took the goalkeeper out of the equation by zipping the ball across the goalmouth for Cammy McClair to tap in at the back post to get his goal after all.

This was a great success for the Bankies. Glenafton is never an easy place to get a result, especially after falling behind so early in the match. Yes, play was a bit patchy again, but despite that, just like at Troon, it was the Bankies who created the bulk of the good goalscoring chances. It has been a great effort from the players to get off to such an impressive unbeaten start, and we know we haven’t seen the best of them yet. Having negotiated the last two away games with maximum points, the Bankies now sit just two points off the lead. With another huge game at home to Largs on Saturday, the players deserve the backing of another big crowd at Holm Park