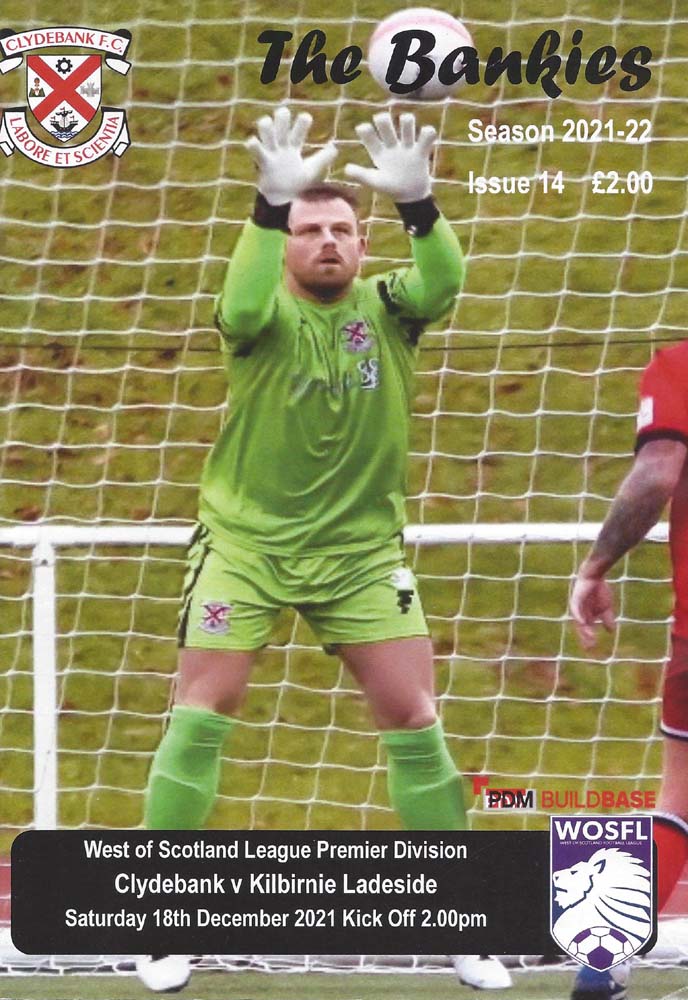 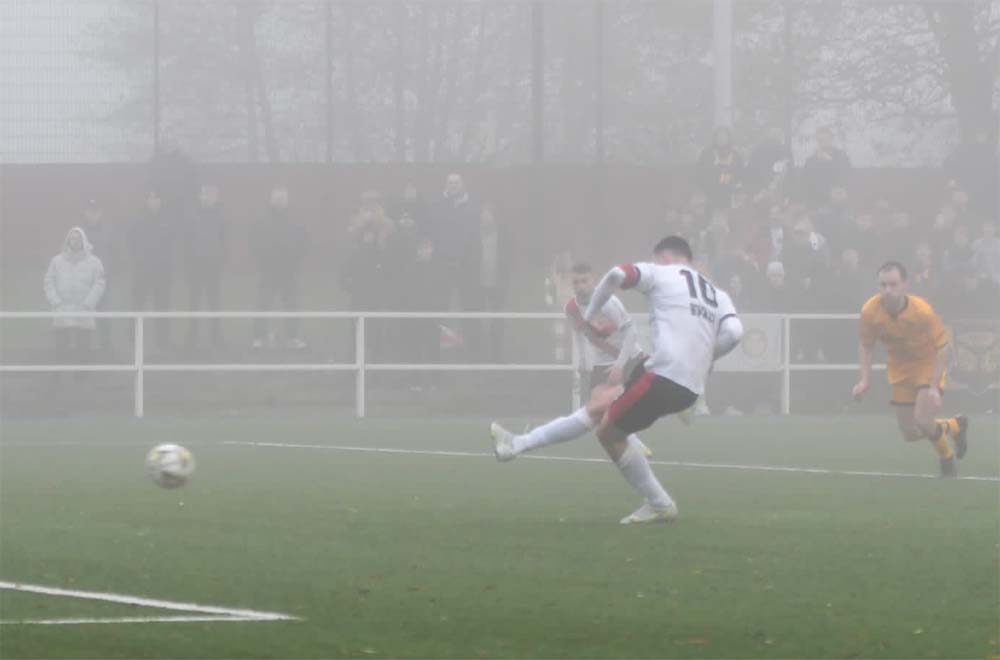 Clydebank saw out 2021 with a valuable three points against a stubborn Kilbirnie Ladeside at a fogbound Holm Park. In a game that was keenly fought, but was never overly dirty, referee Clark reduced both sides to ten men and flashed his yellow card a further six times. Little and McPherson did the damage on either side of half time as Ladeside were a much better outfit than the one the Bankies defeated 5-1 earlier in the season.

Joe Slattery missed his third game on the trot, and was joined on the absentee list by goalkeeper Jamie Donnelly. Young Jamie Stevenson deputised for his ninth game of the season, and would go on to have a clean sheet for the fourth time earning the sponsors man of the match in the process.

As is now becoming a bit of a tradition at Holm Park, the Bankies got off to a slow start and all the early running was being made by the visitors. Spurred on by their large, noisy and drink addled young team, Ladeside forced a few early corners and were getting about the Bankies with a great deal of energy. The closest they came was a shot on the turn from Sharpe which was blocked by Darroch on the six yard line after eleven minutes. It was at this point that Clydebank began to show a bit more adventure in the opposition half.

In the 18th minute, Fraser Johnstone picked up the ball around 25 yards from goal. He moved cross field and picked out Liam McGonigle on the right hand side. The winger took a nice first touch to get beyond the defender, but his diagonal shot across the goalkeeper went disappointingly wide.

There was an even worse miss for the Bankies just six minutes later. A corner from Lee Gallacher was cleared to the edge of the box where Jamie Darroch was waiting. A few weeks ago, against Clyde in the Scottish Cup, Darroch rattled the ball into the net from a similar position, but this time he seemed to remember he is a defender and hit the ball first time over the bar by several yards.

Clydebank were certainly a lot more stable now, and another chance came from McGonigle when he controlled a throw in from Hodge and tried a curling shot to the top corner, but he over-hit the ball and the goal was in no danger. Kilbirnie responded with a corner kick that saw a goal bound header tipped over the bar from Stevenson.

Clydebank were to take the lead on the 35th minute from the penalty spot. Nicky Little started the move as he burst forward on a breakaway. He received the ball back from Gallacher just outside the box. It looked like he might shoot, but he played a clever through ball into Chris Black. Just, as he was about to shoot from just outside the six yard box, Black was hauled down by Taylor. Nicky Little confidently side-footed the ball home, sending the keeper the wrong way for goal number 17 for the season.

Ladeside tried to get level before the break and looked most dangerous from set pieces and another corner saw an unmarked Murphy get his head to the ball, but he mis-timed his jump and sent the ball well over the bar.

Clydebank made a dream start to the second half with a great second goal from a corner kick. Obviously, a well constructed move from the training ground, the ball was worked to Ross McPherson on the edge of the box, and he beautifully placed the ball into the goalkeepers bottom left hand corner giving him no chance.

Similar to the Largs game earlier in the season, just as Kilbirnie looked like they might be on the ropes, the Bankies were reduced to ten men. It looked like a deliberate trip by Hodge as his man got away from him. He might have gotten away with it on another day, but a previous yellow card, and an earlier warning from the ref meant the decision was only going one way and he was sent off.

This gave the visitors a bit of a new lease of life. Before the Bankies could introduce Coll in at the right back spot, Johnny Gallagher stole in at the back post, but his poorly directed header dribbled wide of the post.

Again it was corners that Kilbirnie looked most threatening from. A near post header was hacked clear after 65 minutes, and the ball was immediately sent back into the danger area, but Paterson was way too far from goal to trouble Stevenson with his header.

With just under a quarter of an hour to go, the balance was tipped back in the Bankies favour when substitute Dylan Henry was given a straight red card. The fog made it difficult to see exactly what happened from my vantage point. He certainly looked late with his challenge, and I can only assume the ref thought he had gone in over the ball. The outcome was a red card and a certain three points for the Bankies.

In a rather uninspiring Bankies display, Jamie Stevenson's superb save towards the end probably contributed to his man of the match award. A fine break down the left by Gallagher saw him stroke the ball across the face of the goal for the in-rushing Kyle Girvan. It looked a certain goal all the way, but the goalkeeper somehow scrambled across his goal line and produced a top quality save to keep his goal intact.

The Bankies finished the year on a very strong run of form losing just once in thirteen games. The results recently have been better than the performances, Scottish Cup apart, and the players have earned their break from competitive action for the next two weeks. There is a hell of a lot to play for in the second half of the season, and it is exciting times ahead for the club in 2022.