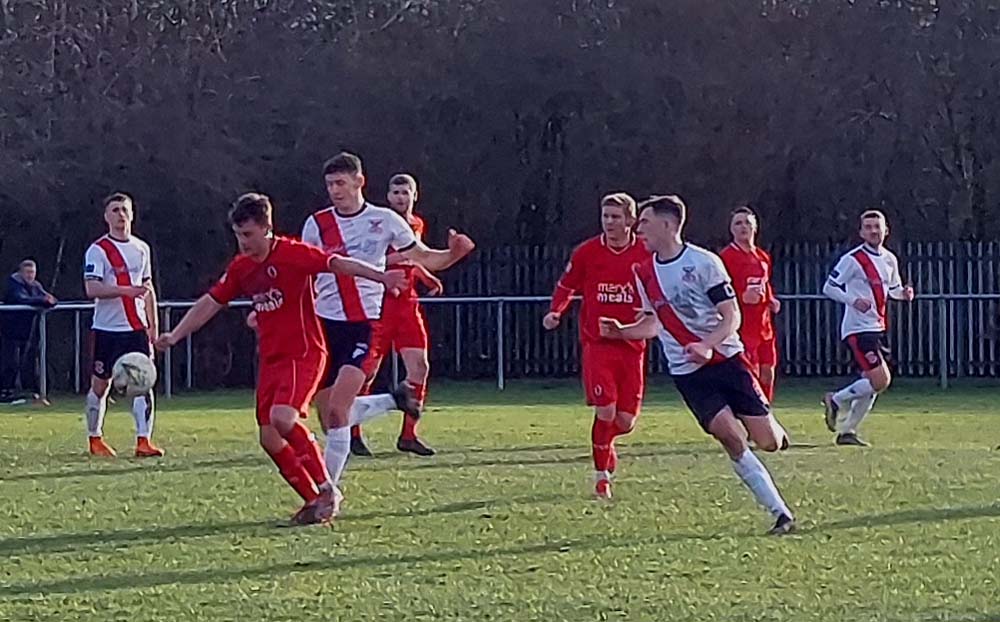 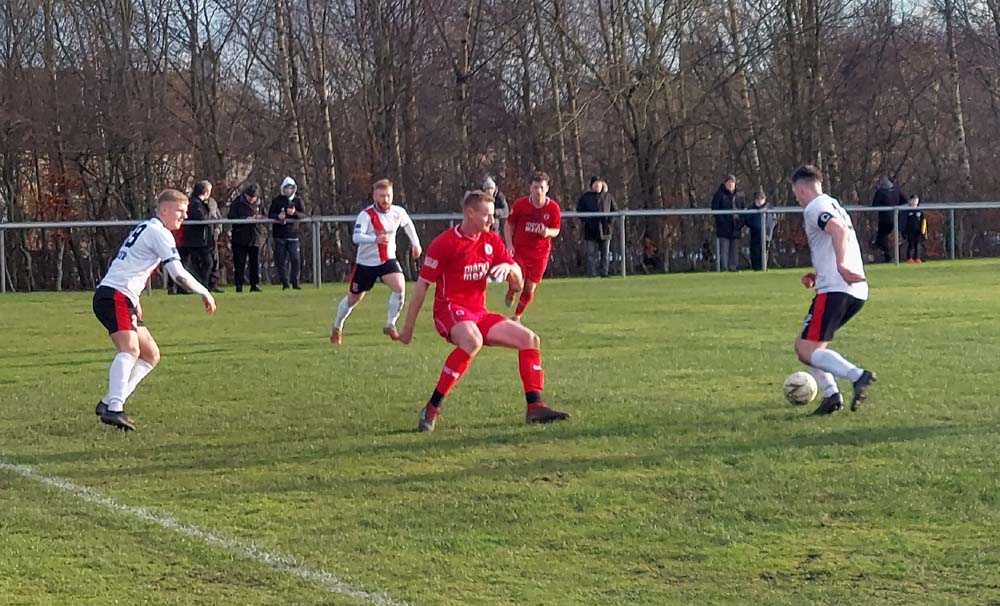 Nicky Little scored his first goals of 2022 to help the Bankies secure passage into the next round of the West of Scotland Cup at McKenna Park, with a flattering 3-0 victory over a very experienced Conference side St Cadocs. It was a poor quality game and the Bankies were only able to relax after Chris Black scored the killer second with 14 minutes remaining.

Martin Smith was given a first start for the first team after his winning goal last week against Bonnyton, and in an interesting change of role Kyle Munro was in the left back position, where he has played regularly for Hamilton Accies, in place of Paul Byrne. Nicky Little was back in a much more familiar role in support of the attack and Matt McLean deputised for the absent Jamie Darroch in the centre of defence.

There was no way the Bankies were going to get it easy against St Cadocs. The club in their first full season in the West of Scotland League have a time served squad with the likes of ex-Kilmarnock full Back Ross Barbour, and ex-Juniors Richie McKillen (Hurlford) Joe Andrew (Glenafton, Clydebank) and Chris Dallas (Pollok) in their side. Though mostly past their best, they are still capable enough players to give the Bankies a tough test, and in general play it turned out that way.

The pitch looked in fairly good condition from the sidelines, but it became evident early on, judging from the behaviour of the ball, that it was going to be difficult to play any kind of decent football. The ball was constantly bobbling about and that may have been responsible for St Cadocs almost taking the lead in the first minute.

Bankies keeper Stevenson made a hash of a kick out as the ball rolled back to him. Joe Andrew was the beneficiary as he put the ball in the net but luckily the linesman already had his flag up for an offside.

There was nothing to choose between the sides, as Andrew again had a neat shot on the turn from the edge of the box after nine minutes. This time the shot sailed just over the bar.

The Bankies had a few penetrating moves without delivering a decent final ball, and after fourteen minutes took the lead with a goal that was a bit out of the blue. The effectiveness of Mulcahy was seen again as he won a high ball just outside the box. It floated over the defence, to the unmarked Nicky Little who struck a fine volley past Duncan into the bottom corner.

Clydebank had a reasonable spell after the goal and Mulcahy had a couple of decent headed half chances, but neither really threatened the home goal. After St Cadocs weathered this spell they created their best chance of the half. Lewis ran to the bye-line and cut the ball back to Wade at the edge of the box, and his low diagonal shot was pushed away superbly for a corner by Bankies keeper Stevenson.

With few chances at the best of times, the game became particularly scrappy before the break with zero goalmouth action for the fans to get excited about. St Cadocs were also out of luck as they had to use all three substitutions in the space of a few minutes either side of the interval due to injuries.

The Bankies were a lot brighter in the earlier stages of the second half, but again it was mostly contained to the middle third of the pitch. Much like the first period however St Cadocs more aggressive style allowed them to force their way back into the game. For all their energy they never really threatened the Bankies goal very much.

When they finally got a good chance before the hour, they really needed to take it. It came from a clever headed knock down which found Dallas just inside the box. He opened up his body to side foot the ball but he lifted it well over the crossbar.

The Bankies hardly had a shot at goal themselves, and when the second goal came with just under a quarter of an hour left, you knew it was game over. It was a fine thumping finish by Chris Black who managed to wriggle free in the box, and sent in an unstoppable shot into the bottom corner.

St Cadocs appeared to give up after this and for the first time in the match the Bankies looked comfortable. A third goal was to be added to give the scoreline an undeserved sheen. It came from a Nicky Little penalty strike after keeper Duncan was adjudged to have fouled Liam McGonigle whilst marking him at a corner kick.

This was a fairly uninteresting game considering it was a cup tie. There wasn’t a lot of goalmouth incident and there wasn’t a huge amount between the teams. St Cadocs are a well drilled side and would make it difficult for most sides. This had the look of a game where there could have been a shock result, but Clydebank played well defensively and didn’t give much away. The Bankies also took their chances when they came along and from that point of view were deserving of the win, though a three goal margin was probably a bit harsh.

The Bankies are at home in the league on Tuesday night against second bottom Blantyre and should be looking to continue this better run of results.