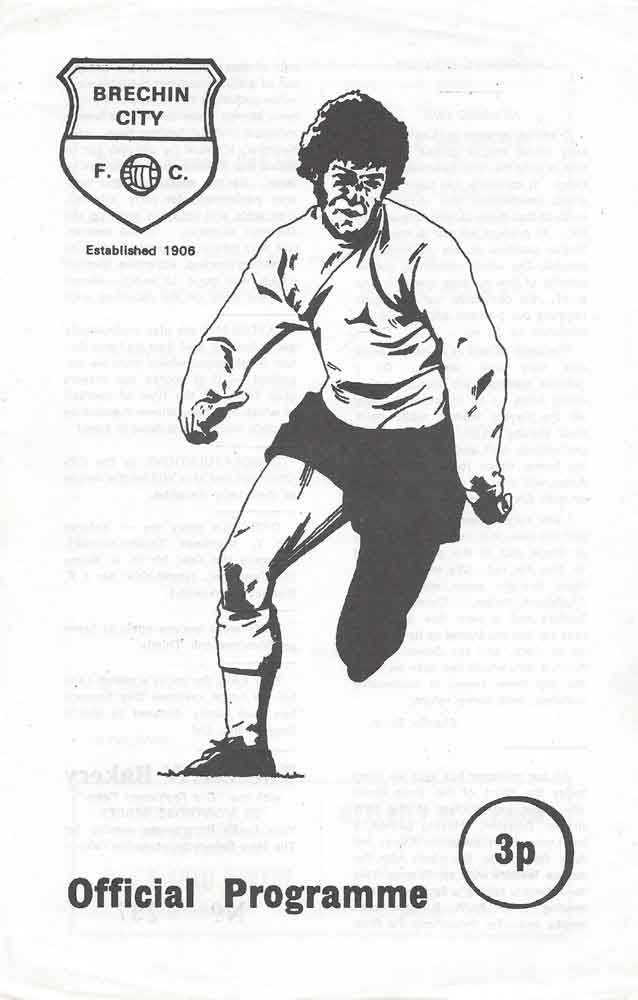 All three promotion candidates recorded good away victories to keep the race at boiling point. Alloa beat Meadowbank, while Raith won well at Stranraer, and Bankies came through a tough match in Brechin mud with two invaluable points.

Bankies had made the inevitable change from last week, bringing Ian Browning into a rearranged forward line that had Larnach on the right and Cooper at outside left, when referee Muirhead decided to start the match five minutes early due to dull weather conditions.

This proved unfortunate for any fans who were slightly late for, after seven action packed minutes, three goals had been scored, after which the game had little to commend it.

The home side shocked Bankies in the very first minute when Hopcroft crossed from the left and Young tucked the ball away for a surprise opener. The league leaders were not going to take a blow like this lying down, however and withing five minutes they were level.

A Davie Cooper special from 25 yards beat Beatson at the post, and barely one minute later Joe McCallan met a Mike Larnach cross eight yards out and flicked home a second.

After all this early activity the game faded considerably. It was always fast and tough, but few more chances were created in the first half which Bankies dominated. Hopcroft and Morton took the toughness a shade too far,and both were booked by Mr Muirhead, who also warned others.

The second half was a story of almost total supremacy for Bankies and it took a superb display of goalkeeping by Beatson to keep the score down to two. Larnach and Lumsden carved open the defence for Browning, who saw his clever lob held at full strength by the keeper. Then Beatson bettered this save with a brilliant tip over from a Davie Cooper piledriver.

Brechin use both subs in a bid to save a point, but Bankies defence were always on top of their job, and were never under any real pressure. For the second week running Bobby Provan replaced Joe McCallan with about 10 minutes left, then Mike Larnach seemed to fall heavily after a tackle by Hopcroft, and he was helped off, to be replaced by Billy Fanning.

All in all, a fine win by Bankies who were always in control after that first minute setback. The locals were adamant after the match that Raith Rovers were a far better side than Bankies, but no one in the red and white colours was too worried by these remarks for after all Raith are still a point behind.

Bankies next play hosts to Albion Rovers in the second last home game. With Raith on cup business and Alloa without a game this gives Bankies a great chance to open up a three point lead which could be a great psychological advantage in the final run-in.

It also gives the Clydebank public a chance to show their appreciation of the local team's efforts, for they deserve better attendances and more vocal support. So how about it? Go along to Kilbowie and cheer Bankies on to a victory that could clinch First Division football for next season.