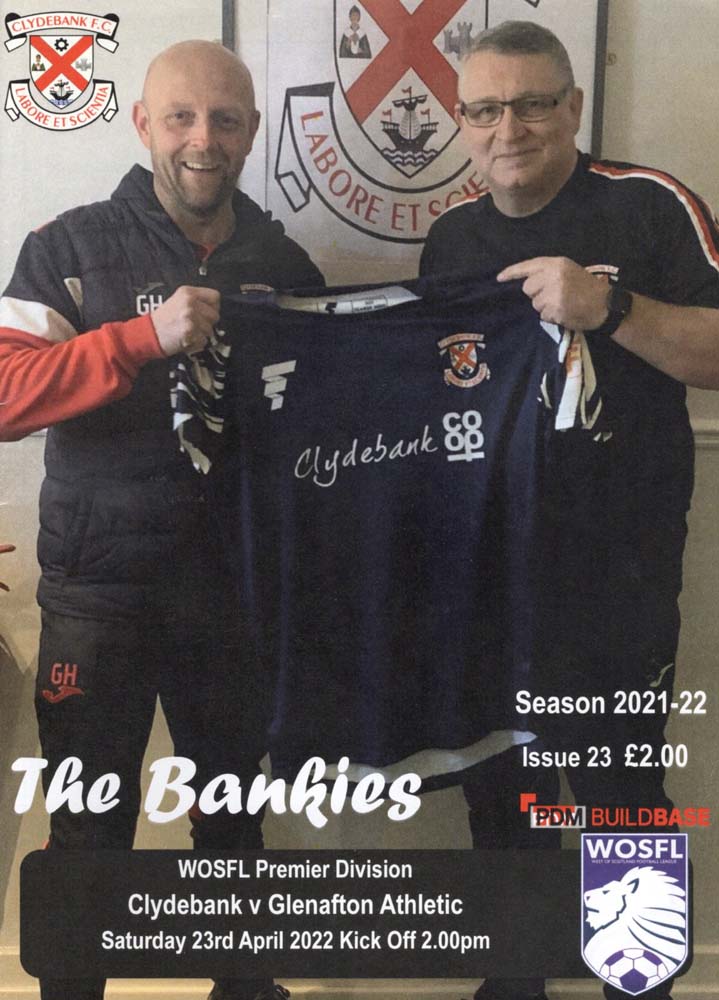 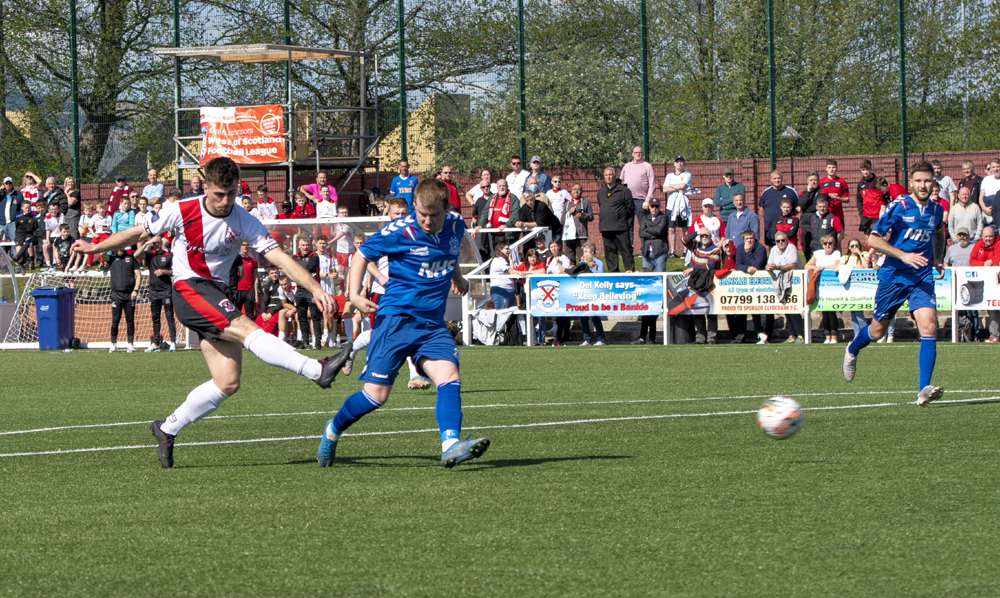 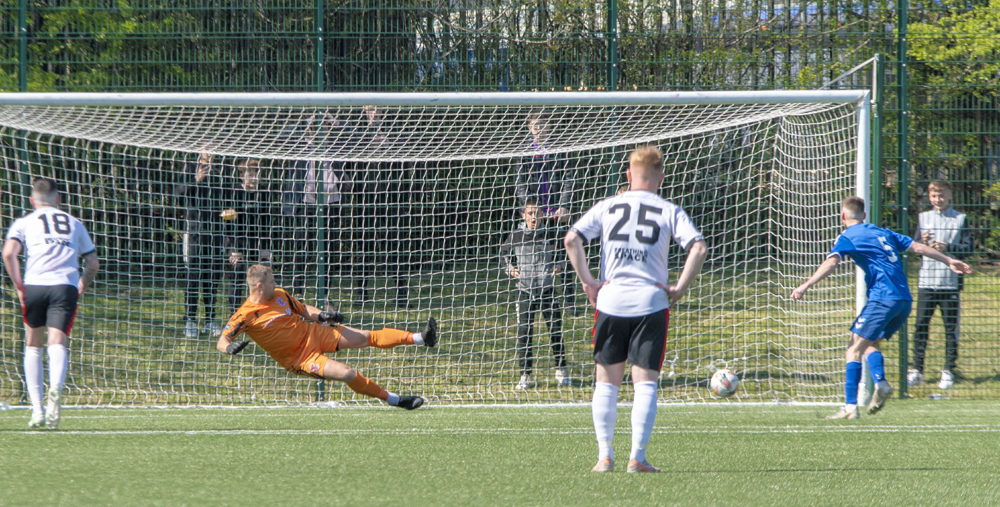 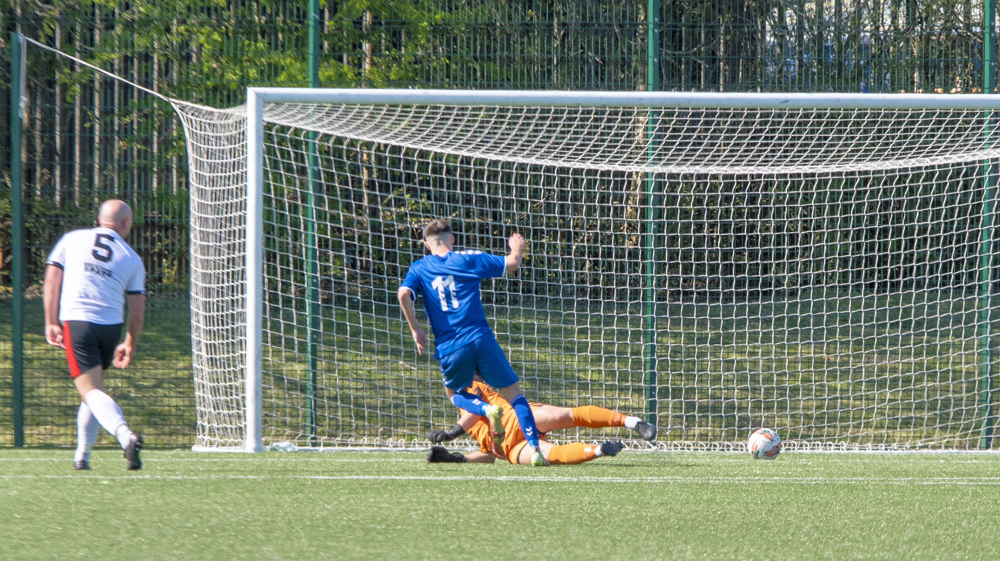 The Bankies played their last home game of the season against Glenafton at Holm Park this afternoon and were deservedly beaten by two goals to nil. It is hard to believe that this is the same group of players who beat Darvel and Pollok in their last two games, but in typical Clydebank fashion when a large crowd comes to Holm Park they end up going away disappointed. Look, Glenafton are in the relegation battle and really needed the points so their motivation was plain to see, but the Bankies were so off the pace that it was a difficult afternoon’s watching.

Apart from a spell in the opening ten minutes, we never put the visitors under any real pressure. Even when we had a lot more of the ball once we went behind, much of that was due to Glenafton conceding ground to us and asking the question – Can you break us down? And the answer, sadly, was no.

So what is going on at Holm Park that we are struggling against almost every side who has visited us in the league? We finish the season with eight wins, five draws, and six defeats. It has to be remembered we scored stoppage time goals on five separate occasions, to gain a win (Blantyre) and rescue four draws (Cumbernauld, Irvine Meadow, Darvel and Rutherglen), so the record could easily have been much worse.

Looking back over the season if we are being truly honest, we played really well against Largs, had good halves against Rob Roy, Cumnock, and Troon, but the rest of it has been an almighty struggle. Do visiting teams like the artificial surface, and it takes away much of the home advantage. For a club that professes to be a ‘footballing’ side then this would be a lame excuse. It is more likely that we are not the kind of side who can take the game to a team and impose our style on the opposition and probably why we do better away from home. It is clear that if we are to control the tempo and flow of the game we need more bite in the middle of the park.

Today’s game, was a case in point when we lost the midfield battle and spent much of the first half on the back foot. I had a look back over the league games from this season and it is remarkable how often this same scenario has played out at Holm Park. In mitigation, the squad is looking a bit shallow and Gordon Moffat used the same starting line up for the third game in a row.

As stated earlier, the Bankies started quite strongly and had four shots at goal in a three minute spell. Ciaran Mulcahy got on the end of a good cross ball, but his effort at goal was deflected for a corner. From the corner kick, the Bankies best chance fell to Green. A training ground move failed to work, but McKinlay persevered and found Green standing on the penalty spot, but his side-footed shot to the bottom right hand corner was well saved by Markey.

Then, a fine move down the right wing saw Chris Black hit the bye line, but his dangerous cross flew across the goal with no takers. This was followed up by a twenty yard attempt by Joe Slattery but he hit the ball into the ground and it was an easy save for Markey.

It all looked quite promising at this point, but then the game started to turn. Glenafton were busy all over the park, and Clydebank started to struggle and putting two passes together became a bit of an ordeal. The ball was being forced forward to no one in particular, and long punts up the park were going straight to the glens keeper or running out of bounds.

The more the half wore on the stronger the visitors became and the match was played in Clydebank’s half of the pitch, although it has to be said they weren’t particularly threatening the Bankies goal either. The best they managed was after 34 minutes when Murphy beat Green on the left wing and played the ball into the feet of Kerr. With his back to goal he turned swiftly, but his low shot was well stopped by Donnelly on his right hand side.

Just before the break a rare foray up the pitch saw Nicky Little dribble a shot from 25 yards that was of no concern to the goalkeeper.

With Clydebank not playing particularly well now, the last thing they needed was to go a goal behind, but this is what happened when Glenafton were awarded a penalty kick three minutes after the restart.

It appeared that Darroch and Little got in each other’s way, allowing Kemp to nip past both of them exposing Donnelly in the Bankies goal. The keeper was about to be rounded when he brought the striker to the ground.

There is a real conundrum now evident when Nicky Little is asked to play in a deeper midfield role and whether it actually works on any level. As a supporting forward his record speaks for itself, but he is not the same player in a more withdrawn position and it is unclear to me whether this benefits the team on the whole. The goals have dried up too with his last goal in the league that wasn’t a penalty coming at the start of December against Troon.

McKernon took the spot kick and went for power down the middle of the goal, but Donnelly read it well and blocked the shot. Unfortunately the “eagle-eyed” linesman decided that the Bankies keeper had moved from his line, and the penalty was ordered to be re-taken. This time Murphy took matters into his own hands and put the ball away sending Donnelly the wrong way.

The Glens now having something to hold on to invited the Bankies onto them, but the game was just a midfield slog with Clydebank having no real inventiveness about them. It took until the 67th minute for the Bankies to have a glimpse of goal when Substitute McPherson did well to win the ball and send Mulcahy away down the right hand channel. The striker hit a good low effort, but Market blocked with his legs.

Glenafton hit back moments later when on a quick break Kemp unleashed a powerful shot which Donnelly smartly tipped over the bar.

Both sides swapped chances after 76 minutes. A corner to the back post found Darroch on his own. Time seemed to stand still as he headed goal ward. Everybody stood like statues apart from the man on the line who cleared the ball away. Immediately, Murphy went on a tremendous run leaving several Bankies in his wake and he sent McKee away down the right wing. As he reached the box he went for goal, but the ball went high and wide.

We’ve been here umpteen times before this season, but big Matt Niven was sent forward to try and rescue a point in the closing stages leaving the defence exposed. A couple of headers at goal could have paid the gamble off. Mulcahy and then Niven forced saves out of Markey.

However, it is a high risk strategy and it was to be the Bankies undoing as McKee was sent clear on goal due to the massive Matt Niven shaped gap in the defence. The forward duly did what was expected of him and finished the game by sticking the ball past Donnelly.

The Bankies have got much right this season, and the improvement overall is positive, but certain frailties remain, particularly at home. With two more players re-signing terms this week the players you would want to keep for next season have now already signed up. Fourth place in league is now guaranteed and is not a bad effort considering the clubs who are ahead of us. To maintain this level, and possibly progress further, around four or fives new faces are required and it will be interesting to see who the management can attract to the club.

The remainder of the season will all be away from home. Next week is the second last league game when we travel to Ayrshire to face Irvine Meadow.