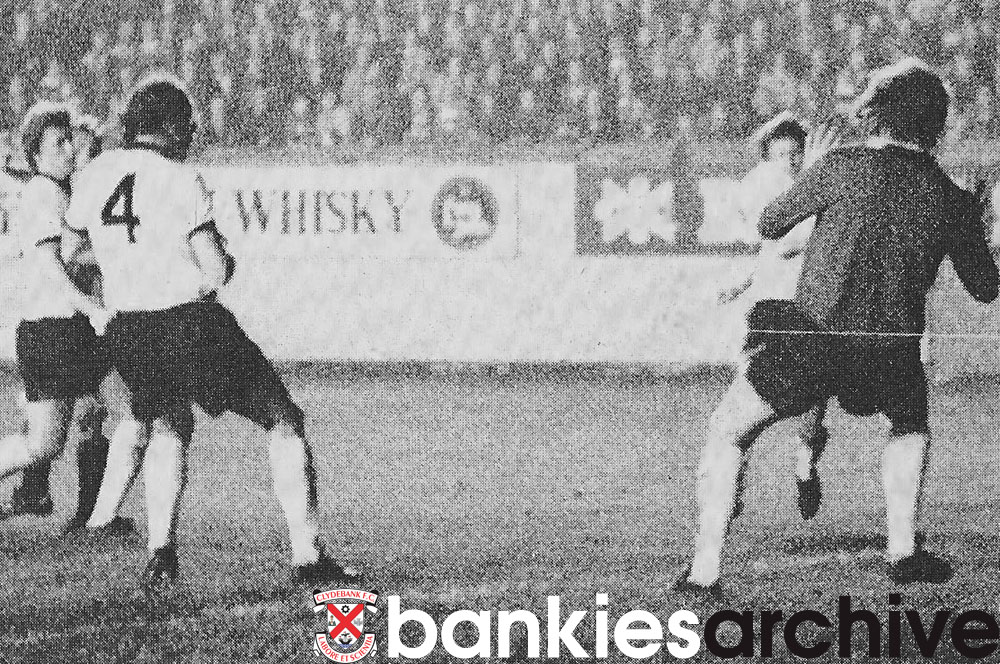 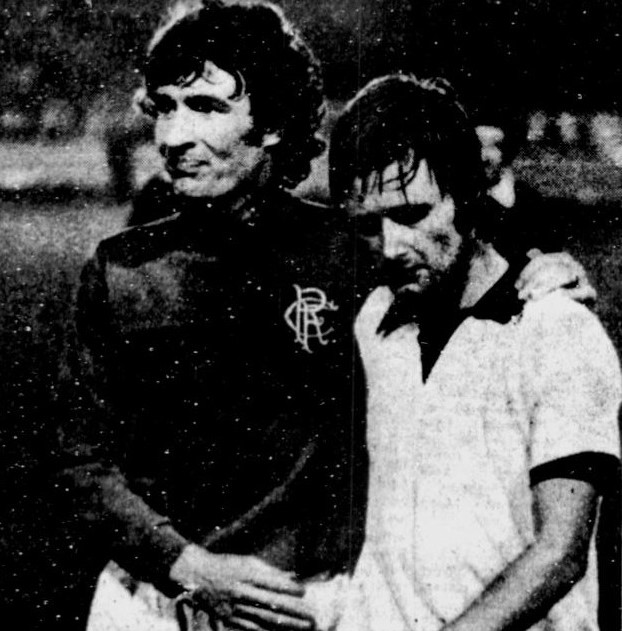 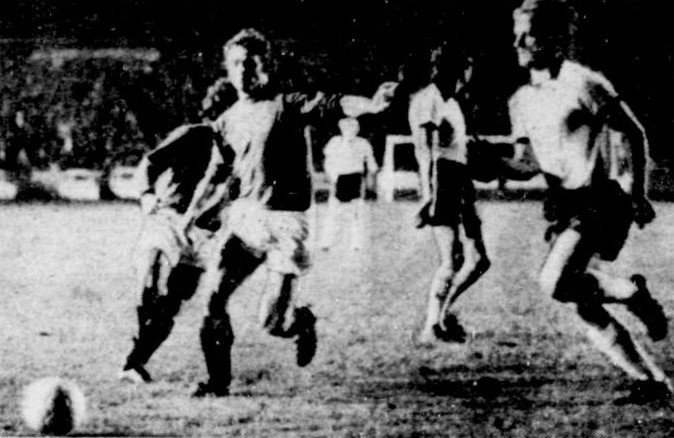 The long, long saga has finally ended, Clydebank’s heroes trooped despondently off the Firhill turf on Tuesday night. They had been beaten but in doing so had won many new friends and the respect of the whole of Scottish football.

On Monday the Brave Bankies matched Rangers ball for ball in a fast, exciting match that had everything but goals. Only the brilliance of both keepers kept the score sheet blank.

Clydebank hero of the night was Jim Gallacher. He foiled the Ibrox men which he saved an Alex Miller penalty. The award, in fact, was a doubtful one. McKean was adjudged to have been brought down inside the area but the referee seemed to be the only one who thought so, So Clydebank survived to fight again at Firhill.

Rangers went straight into attack on Tuesday and scored after only six minutes. McLean crossed from the right and Parlane headed wide of Gallacher.

It took the Bankies only 40 seconds to equalise. Cooper was brought down for the umpteenth time just outside the box, He took the kick himself, floated the ball goalward. It bounced just in front of Kennedy, went under his body and over the line.

Every time Cooper got the ball thereafter the Rangers players would panic. Time after time he sent Miller the wrong way and the only way he was stopped would be illegally.

Clydebank were the better side in the first half. New boy Houston showed up well and Fallon was his usual self at the back.

Rangers took the lead midway through the second half. McLean was obstructed far out on the left. He lobbed over the ball to McKean who steadied himself and shot past Gallacher One could sense that it way the end for the Bankies. They had the odd flourish after that but Rangers were happy to resort to time-wasting ploys.

So the Bankies went home for a well-served long sleep. Their dream, no doubt, centres around winning the First Division. If they play as they have been doing then it won't be a dream for long.

Said Bill Munro on Wednesday morning, "Naturally I'm disappointed but I think we have done well to have played Rangers four times and to have come away only one goal behind. I think we have won a lot of new friends in Clydebank and I hope they show their friendship by coming along to the games."

Bill has one or two injury worries for Saturday's top of the table crunch match with St Mirren at Love Street. Norrie Hall has ligament trouble and Billy McColl and Billy Fanning also have niggling injuries.

After their brave display on Tuesday the full-timers were given couple of days off.

So, come on all you friends of Clydebank. Paisley is hardly oceans away - it's quite an easy place to reach from the other side of Renfrew Ferry - Bill Munro will be delighted to see you there.

It took the holders 420 minutes to dispose of the First Division leaders. Clydebank went down with their colours nailed to the mast in what was only their third defeat - all by the odd goal -in 21 games this season.

Top men in the Clydebank colours were Gallagher, McLaughlin, Abel, Fallon and Fanning in defence with Cooper in a class by himself up front:

There was no doubt that Rangers deserved their success, but they had to work hard for their victory. Aberdonian Kenny Watson had a splendid game as deputy for Colin Jackson.

Both teams had changes from the previous evening.

Rangers began with tremendous gusto, especially McLean, who had three pinpoint centres in quick succession cut out in superb fashion by Gallagher.

Then a real threat as Clydebank hit back. Fallon dispossessed McKean and put Larnach down the right. When the ball came over Cooper shot straight at Kennedy.

Rangers took the lead in seven minutes. McKean put McLean clear on the right. He took the ball to the by-line before crossing for PARLANE to head well beyond Gallagher's reach. .

Within two minutes Clydebank were level. A COOPER free kick from 30 yards floated over the heads of the Rangers defence. Denny misjudged the fight of the ball, and Kennedy in turn was foxed as the ball slithered over the line.

The crowd thoroughly relished the subsequent exchanges as the sides went at it hammer and tongs.

McLean continued to be a thorn in the Clydebank flesh. Another touchline burst and centre went to Parlane who let the ball run through his legs, but not a clubmate was up to cash in on the chance.

In 15 minutes Dawson was booked for a foul on Larnach. Seconds later McKean dribbled through the Clydebank defence to let fly from 20 yards, but Gallagher was in the line of flight and saved splendidly:

MacDonald swung a high ball into the middle but Parlane was penalised for high kicking.

Fallon was an inspiring skipper for Bankies, both in defence and in attack. He constantly broke up the Ibrox attack and always used the ball well in his distribution.

A Cooper piledriver was dangerous as Clydebank proved how nippy they could be on the break.

Clydebank matched Rangers at every turn. McLauchlan and Abel never put a foot wrong and with Fallon and Fanning operating a twin pivotal partnership, the Light Blues could not break the Kilbowie 'iron curtain.'

Cooper was a constant menace to Rangers with his mazy dribbling and left-footed thunderbolts. One in particular had the crowd in a ferment as the winger finished with a rocket shot that skimmed the bar.

Ibrox skipper Greig was outstanding with mopping up operations as Cooper and Larnach threatened danger with their combined moves.

Rangers had McDougall on for MacDonald at the start of the second half.

In a Clydebank counter attack Hay tested Kennedy with a raking drive. Then Cooper went down the left and swung the ball to the far post where McCallan just failed to touch it through from two yards.

Larnach was next to catch the eye as he won a corner off Denny, but Houston slammed Cooper's in=swinging corner high over.

Lumsden was doing a great job for the Bankies. He was back helping his hard pressed colleagues and urging on his attack, never wasting a ball.

Minutes later McLean looked like doing the trick after a great dribble, but he was dispossessed by Fallon. A goal was only delayed. McLean went down the left, but was fouled by Hay in the 60th minute.

The winger chipped the ball to McKEAN, who lashed it home at the far post from 12 yards.

Rangers were now moving like a winning side. Browning was booked in the 70th minute for a foul on McLean,

Lumsden was booked in the last minute for a foul on McKean.

---
Report 3
---
Rangers subdued and finally conquered brave little Clydebank at the fourth time of asking when a Bobby McKean goal in 61 minutes last night won them this league cup quarter-final second replay at Firhill before a crowd of 12,000.

After 420 minutes of football the men from the first division finally gave way but, as in the three previous matches, they again emerged with honour and their pride intact.

They survived an early goal from Derek Parlane to hit back immediately through their magic man, Davie Cooper, and only when the rigours of the three previous battles caught up with them did Clydebank begin to look like cracking.

Then McKean stepped in with the goal that ended what will go down in football history as a league cup epic.

Rangers now go forward to meet Aberdeen in the semi-final at Hampden Park today week. Even if Jock Wallace's men go on to retain the trophy they will not come up against tougher opponents than the rabbits who came so close to providing the shock of the season.
Rangers immediately made tracks for Gallacher in the Clydebank goal and within seconds only a great last ditch tackle by Abel halted Parlane. But Kennedy was the first goalkeeper in action when Houston got among the Rangers defence and shot for the far corner. Kennedy dived and held the ball safely.

In six minutes Rangers went ahead. McLean took on Abel on the right and sent over a high, hanging cross and Parlane rose to head away from Gallacher. It was a stunner for Clydebank but the amazing men from the first division hit back inside a minute with an incredible goal.

Miller fouled Cooper 25 yards out and the winger took the kick himself sending a curling lob over the defence and past Kennedy. The goalkeeper, who seemed slow to move did get a hand to the ball which trickled agonisingly over the line.

Another Cooper free kick had Rangers in trouble but this time Kennedy managed to gather Larnach's header. Then in 15 minutes with tempers beginning to fray, Dawson was booked for a foul on Larnach.

The pace and the effort was astonishing from two sides who had gone through the ordeal of extra time only 24 hours before, and an electrifying burst by McKean took him past the Clydebank defence. The inside man shot strongly but Gallacher, Monday's hero, saved well.

There was another fright for Clydebank in 35 minutes when Fanning was off the mark with a pass back, and Gallacher had to throw himself to turn the ball away for a corner.

More trouble for Rangers when MacDonald failed to appear at the start of the second half. He had taken several hefty knocks in the first half and Iain McDougall I took over in midfield.

Within 2 minute Cooper again showed his class with a run that took him past four defenders. His cross was missed by inches. Then the winger set up another chance, but with the goal wide open Houston crashed the ball high over the bar.

Cooper was in magnificent form. He beat Miller three times, then took on Greig twice and still came, away with the ball.

But Rangers gradually gained control, and in 61 minutes Bobby McKean hit Clydebank with a wonder goal Lumsden and Cooper obstructed McLean just outside the box, and the little winger lofted the ball on to McKean, who hooked it over the defence and ran on to send a great shot past Gallacher.

Minutes later Browning was booked for a foul on McLean and Clydebank made their second substitution, Provan for Fanning who was limping badly.

The first division men appeared to be wilting and Rangers' superior strength was beginning to tell. With 13 minutes left Rangers made their second substitution, Henderson taking over from Parlane, but the fire had gone out of the match and the Ibrox men comfortably played out time, Lumsden was booked in the last minute.