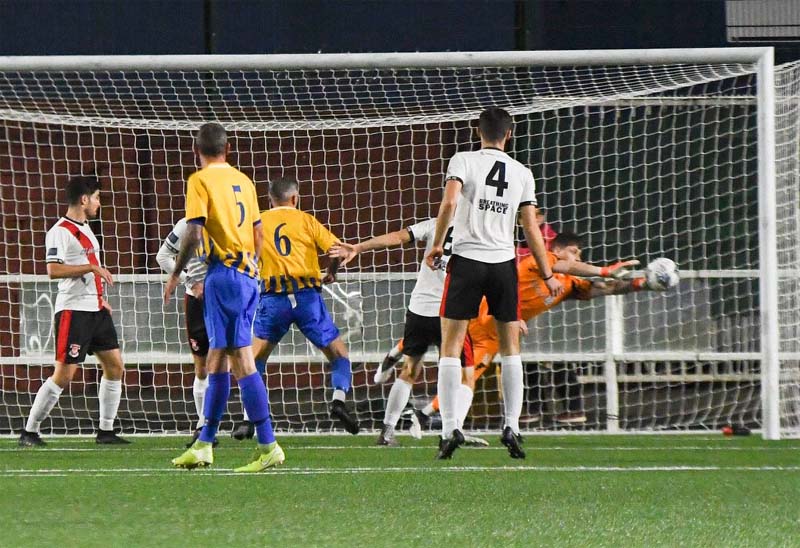 It was a sore night for Clydebank as they were deservedly beaten by Hurlford at Holm Park by three goals to one in the West of Scotland Premier League. Apart from the opening twenty minutes and a spell near the end when they managed to cut the deficit, they never really looked like taking anything from the match. It was also a night to forget for the Bankies young stand-in goalkeeper Jamie Stevenston who dropped a real clanger for Hurlford’s second, and probably, killer goal.

It is a cliché but goals do in fact change games. After Hurlford took the lead on the 20th minute they largely controlled the game and the Bankies didn’t have the answers. It was quite hard to take as Clydebank looked quite good in the opening stages.

With Donnelly, Holmes, and Mulcahy all unfit, Clydebank brought in McGoningle, and Saturday’s match winner Chris Black to the starting eleven. Fraser Johnstone also returned from suspension. Nicky Little was pushed into the striker’s role and there were several chances in a strong start from the home side.

Straight from the off, Clydebank almost took a first minute lead when Hodge’s low near post cross was almost stabbed home by Nicky Little. Then, straight down the other end Stevenston made a fantastic full length save from a volley at the back post which arrived via a corner kick.

It was open football and Clydebank produced a quite mesmerising move down the right wing with flicks and turns from Hodge, Black and Gallacher. All it needed was the finish from Little, but the ball squirmed agonisingly wide of the keeper’s right hand post.

Matt Niven showed how dangerous he can be from a set piece when he got his head on a Lee Gallacher corner kick. He was out of luck as his downward header found keeper McDonald in the perfect position to save.

Then came the goal and from a needless trip on the edge of the box on Morrison. It was a well taken shot by Whittaker as he got it up and over the wall, but the ball didn’t exactly go into the corner, but Stevenston was rooted to the spot.

You don’t really want to fall behind to Hurlford. You know what you are going to get from them, there are no real surprises. They will chase you down, they will fight and scrap for every ball and you have to combat that to break them down. Unfortunately, the Ayrshire started to take control of the game. Save for one great chance for McGonigle who was put through by Nicky Little after 34 minutes, but his shot went straight at the keeper, The Bankies upfield forays became fewer and fewer.

This pattern continued into the second half. Clydebank were rarely seen as an attacking force as Hurlford controlled the midfield. It wasn’t as though United were creating many chances themselves, but the game was certainly being largely played in the Clydebank half.

The away side doubled their lead on the hour with an awful goal. Clydebank keeper Stevenston completely mis-judged the bounce of the ball from a harmless punt into his penalty area, and he only just got his fingertips to it to prevent a comic goal, but that was the end of his luck as the ball found its way to Morrison who had the easiest of tap ins.

Not for the first time this season, the Bankies needed the great escape. With that in mind Gordon Moffat used all three substitutes and shifted the formation to a 3-5-2. It took a while for it to have any effect, but the Bankies started to show some promise in front of goal.

Nicky Little went just wide with a low 20 yard snapshot, then Green was really unlucky as he got his head on the end of a Gallacher corner. The goalkeeper knew nothing about it as the ball hit his feet and bounced up into his arms. This spell led to the Bankies pulling a goal back with eight minutes to go. Nicky Little played a fine pass into Ross McPherson into the box, and he took one touch, and thumped the ball into the net from twelve yards.

For the first time the Hurlford defence looked panicked, but it didn’t last long as the Bankies rearguard didn’t cover themselves in glory as the two goal lead was restored just four minutes later. In fairness to Kevin Green he was left in a one on one situation on the half way line, but he seemed to be caught ball watching when it came up to him. His inexplicable delay in moving to the ball allowed Morrison to nip past him with a clear run at the goal. It would maybe be harsh to be too critical of the goalkeeper but Morrison’s shot was straight at him if a little high. Stevenston got a good hand to it but it wasn’t strong enough and the ball made its way into the net. A couple of goals that a six foot plus keeper probably wouldn’t have lost.

So it was an all round disappointing night with results going the wrong way meaning Clydebank fall to third place in the league with more games played. More worrying, there are a couple of patterns emerging the more games we play. Firstly, our home record is quite poor. We have only won two out of seven at Holm Park, and three of those games required stoppage time goals to rescue results. That was three draws that could easily have been three defeats. Secondly, we haven’t been able to beat any of the other clubs in the top eight. Three draws and two defeats so far and all but one at home. We have another of that grouping coming to Holm Park on Saturday in the shape of Kilwinning Rangers and we can’t really afford to lose that one now as we run the risk of losing touch with the top two.