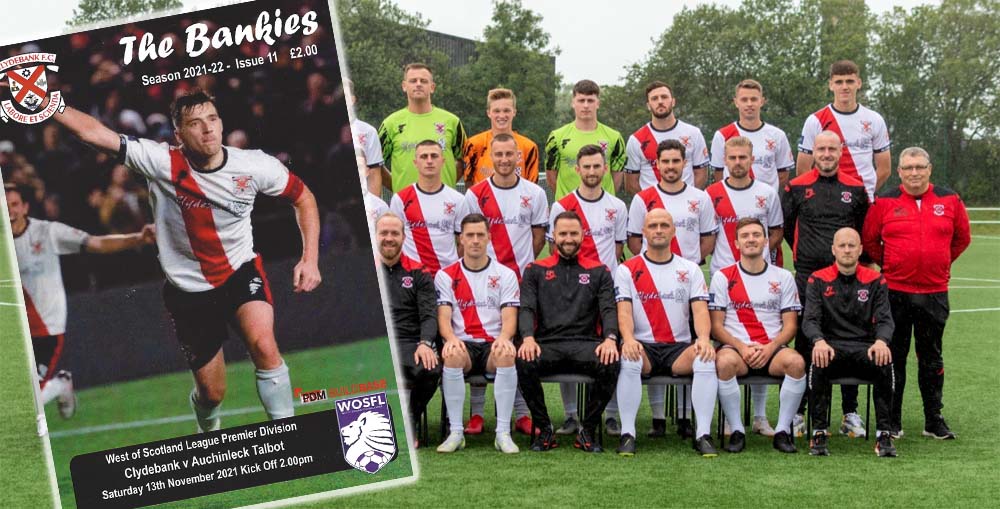 Clydebank were found to be sadly lacking against Auchinleck Talbot as they lost tamely to the new league leaders. It was the same old story against the Beechwood side who never looked back after taking an early lead and cemented their position with a second before the break. The Bankies were slightly better in the second half but Talbot were never in any danger and it is clear that despite having a decent side Clydebank require a higher standard of player if the club are to move to the next level.

The side were along similar lines to the team who won down at Cumnock last week with Michael Bailey replacing the suspended Adam Hodge. Chris Black also returned to the starting eleven in place of the absent Joe Slattery who was sorely missed.

The match started off fairly low key with the Bankies shooting towards the pavilion end. However, Talbot showed how quickly they can flick the switch. Black gave the ball away in his own half, and suddenly Glasgow created an overload on the right hand side. He played in Wilson, who luckily for the Bankies didn’t have a great first touch allowing Donnelly to race from his line and block.

You give Talbot an easy chance and you might get away with it, but not two. One minute later and Shankland had way too much space in the middle of the park, and he slipped in a simple pass to Wilson inside the penalty area, who hit the ball first time on his left hand side low past Donnelly. It was all too simple, and just a poor goal to lose.

Clydebank came into the game a little after this but made virtually no progress towards goal. Holmes had a twenty yard shot that hooked wide, but not much else. The Bankies always seem to look rushed on the ball against Auchinleck, and resort to needless long hopeful(less) punts up the park.

The visitors continued to look the more threatening side and there were a couple of near things. A corner kick in which Donnelly appeared to be impeded almost led to a goal, then Bailey could have been penalised for a spot kick as he clearly pushed a forward at the back post. The best chance in this period was a fast break away from Wilson who played a great pass to Glasgow, but he shot wildly past when he should really have done better.

The Bankies finally had a great scoring opportunity after 34 minutes. A long clearance from Donnelly went straight over McCracken’s head. The ball bounced umpteen times in front of McKinlay and he appeared to momentarily take his eye off it, allowing McCracken to get a tackle in. The ball was there to be hit, and this was not the first time this season that McKinlay has failed to deliver in this kind of situation. Not even getting a shot in, when the Bankies had made few opportunities up to that point was particularly galling.

Just four minutes later Talbot went two up, and frustratingly it all came from a Clydebank free kick. It was a clever enough move, as Gallacher dinked the ball to Black, who laid it off for McGonigle. The winger had a shot, but it was a comfortable gather for Leishman.

Talbot’s speed in the transition is what makes them so good, and the Bankies were not alert to it. A quick long throw by Leishman turned defence into attack. Glasgow sprinted down the right wing, crossed to the back post and Boylan powerfully headed downwards. Donnelly got to the ball, but appeared to roll backwards over the line, and the well positioned linesman signalled it was a goal.

Auchinleck looked like they could add to their lead and the Bankies needed half time to reset. The home side came out a little stronger in the second period, again without creating any chances of note. This led to Moffat, after 63 minutes, removing both of his holding midfielders, Holmes and Black who were not at the races all day. He brought on Johnstone and an extra forward in the shape of McPherson to try and reduce the deficit.

With Johnstone in place the midfield looked a lot more secure, and the ball was being moved about with a bit more speed. This led to the Bankies getting into advanced positions more often, although it has to be said that Auchinleck were in complete control and were containing the Bankies front line with ease.

It would probably have been harsh had the Bankies been on the end of a real pasting but it could have transpired if Talbot hasn’t missed two fine chances on the right hand side from similar positions. Shankland and McCracken both hit low diagonal shots that just went wide of Donnelly’s far post.

With quarter of an hour left the Bankies could have pulled a goal back from a corner kick. Gallacher, whose deliveries are superb, found big Matt Niven on the edge of the six yard box, but he couldn’t keep his header down and it bulleted over the bar.

The Bankies finished the game with a few long range efforts, but Leishman was in supreme form and he dealt with these shots effortlessly.

This was a great opportunity for the Bankies to turn the league championship into a three team race. However, this result has probably put paid to that, with Talbot now seven points ahead and having two games in hand.

Overall, the Bankies have made great strides this season, and the team is probably as good as we have had since 2003, but now we have seen the team play almost all of the other sides, it is fair to say that there are some problem areas. The issue is more to do with whether we have the quality of player who can take us to the next level. We are competitive enough against the top six, but we have failed to beat any of them, and haven’t really looked like we could

With Kieran Mulcahy’s injury looking likely to keep him out of the side long term, it is becoming increasingly obvious that we are in need of a striker. We have simply not been scoring enough goals, and missing chances at vital times in big games has cost us. We are also in need of more strength in the middle of the park. When Johnstone or Slattery are missing from the engine room, we are just not the same side. It was no surprise that both players in those positions were substituted today. The defence is probably the strongest part of the team in terms of cover, but Talbot showed up some players lack of pace in that department.

Hopefully, the management are identifying targets to remedy some of these problems, and some of the money coming into the club from the Scottish cup run can be diverted for that purpose.

Next week the Bankies travel to Glenrothes in the South Challenge Cup.