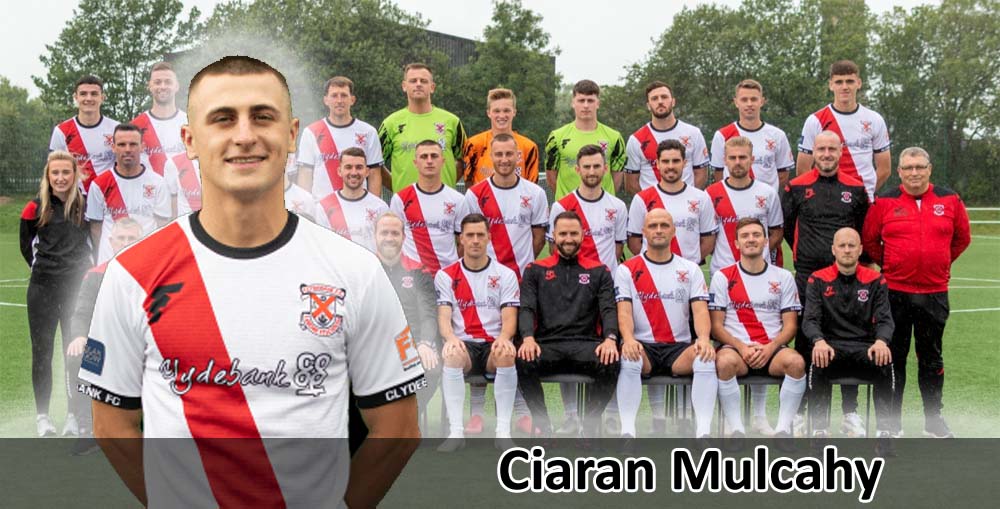 Clydebank bounced back to top form with a stunning three nil victory over title challenging Darvel in the West of Scotland League at Recreation Park this afternoon. It has to be said the Bankies were brilliant, particularly in the first half. The first 45 minutes was as good as anything the players have produced this season, and there have been some high watermarks along the way.

The high pressing was executed to perfection to the extent that Darvel could hardly get out of their own half for long spells. The desire to win the second ball was key as the home side were forced into mistake after mistake. The Bankies went into the interval two goals in front, but it would not have flattered had the score been double.

That is what makes last weeks performance so frustrating. This group of players can reach these heights, but perhaps the consistency to do it week in week out is the missing ingredient. It has been the home form which in the final analysis has let the Bankies down. Away from Holm Park there have been 11 wins and just 2 defeats in 16 matches which is championship winning form, however that is tempered with just 8 wins in 18 at home. The reasons for that are for the manager and his team to work out.

For a first ever visit to Recreation Park the Bankies were not short on injury worries with Hodge and Johnstone out, and Lee Gallacher only making the bench. Paul Byrne was also absent due to his suspension starting after being red carded last week. However, Jamie Darroch was back and what a difference he makes to the stability of the defence.

The home side were actually the brighter in the opening stages, forcing a couple of corners but not showing any real signs they were going to put the Bankies defence under any real pressure.

After eight minutes the Bankies started to show they meant business, when the outstanding Ciaran Mulcahy held off McShane in the middle of the pitch and laid the ball off to Hamish McKinlay. The forward moved the ball onto his right foot, and his shot just missed the target due to a deflection from a defender.

The Bankies took the lead from the resulting corner. McGonigle crossed into the near post area where Matt Niven had made the perfect run, and bulleted the ball home with his head from six yards out.

It was at this point that the belief flooded through the side. Darvel were trying to play the ball out from deep positions, but the Bankies were all over them and the home side gave up possession in their own half time and time again.

Mulcahy was at the heart of things again as he set up McKinlay for another chance, but Ruddy was able to save the effort as a defender managed to block and take the sting out of the shot.

Then, shots began to rain in on the Darvel goal from all angles. After 22 minutes a McGonigle cross was cut out and Slattery rifled a shot over from 25 yards out. As the home side lost the ball again a minute later the ball was rolled inside to Little and his side footed effort from the edge of the box just missed Ruddy’s right hand post by a whisker.

Darvel just couldn’t hold on to the ball and Little was the beneficiary. You know things are going well when the Captain tries to lob the keeper from 40 yards. The keeper was fortunate to see the ball go just wide as he wasn’t stopping it if it was on target.

The Bankies really should have been two up after 26 minutes when the ball was slipped through diagonally to Mulcahy. The striker faced with just Ruddy to beat tried to bend the ball beyond him into the far corner but the keeper made a fantastic one handed stop sending the ball out for a corner.

Darvel finally relieved the pressure with a cross and shot from the left hand side. Morrison met the cross but from close range first timed the ball over the bar.

Then two Nicky Little free kicks followed. The first was for a shocking tackle on McGonigle by Meggatt. Little’s first effort hit the wall, and Slattery took on the rebound first time missing by around a foot. The second from a similar position saw Little hit the target this time, but was a comfortable save for Ruddy.

With six minutes left until half time, the Bankies scored a deserved second and it came from a horrendous error by Ruddy. A poor attempt at a kick out saw the ball land straight to the feet of Ciaran Mulcahy. The striker curled the ball home for his seventh goal of the season from around 25 yards out with Ruddy hopelessly out of position.

Before the break there was an incredible sequence of misses. It was like a five-a-side match as the ball was pinging about everywhere. There were at least four shots at goal in under 30 seconds. I couldn’t keep up as it looked like Black had a shot, then Little hit the post, followed by another shot that deflected back to Nicky Little. The striker tried a neat chip but was just too high and the Darvel goal somehow escaped.

It would be interesting to see if the Bankies could keep up this level of intensity and get a killer third in the second half. This question was almost answered straight away as Slattery nearly scored goal of this or any other season. He showed great skill in the box, lobbing a defender and then the goalkeeper only to see his shot come off the post.

Darvel had a brief rally as they had two chances in a minute. Ferguson picked up a clearance from a corner and smacked the ball towards goal. With Donnelly beaten Black cleared off the line. Then Morrison fed the ball out wide to Miller who sent in a terrific volley but This time Donnelly was in the right place to save.

The game exploded in the 55th minute when Miller who only came on at half time was sent off. McKinlay was holding onto the ball trying to waste a little bit of time. Miller, in his anger, lashed out with an elbow which was in plain view of the ref. Ross Clark really was given no option but to flash his red card at the substitute.

The Bankies went into game management mode against the ten men and added a third goal on the break after 65 minutes. Lee Gallacher tried to pick out Slattery just inside the box, but a defender got a tackle in but only succeeded in sending the ball back to Gallacher. The wee winger was in the perfect spot to curl the ball into the top left and corner, and he executed it perfectly giving Ruddy no chance.

The last twenty five minutes saw the game lose much of its fizz with the result now beyond doubt. Darvel ended up with nine men on the park as Ferguson was injured and the full allocation of subs had already been used.

Darvel had a few chances towards the end and Andy Stirling – the home side’s best performer on the day – hit the bar with a late effort.

Clydebank could have also further increased their tally. Gallacher hit the keepers legs when clean through, and Mulcahy had a shot which went narrowly wide of the post. The large Bankies contingent celebrated as the ref blew for time.

There was not a failure in the Clydebank side, however Ciaran Mulcahy was the outstanding player on the pitch. His timing in the air is just incredible for someone of his height. He regularly beats players who tower over him. With the right combination of players around him who can pick up his knock-downs then the Bankies could have a lethal strike force next season.

There is no game next Saturday, so the next match is a week on Wednesday at Pollok. The Bankies haven’t beaten the Southside outfit in quite a long time now, however if the players can take this form into that match then there is every chance for this run of results to be ended.