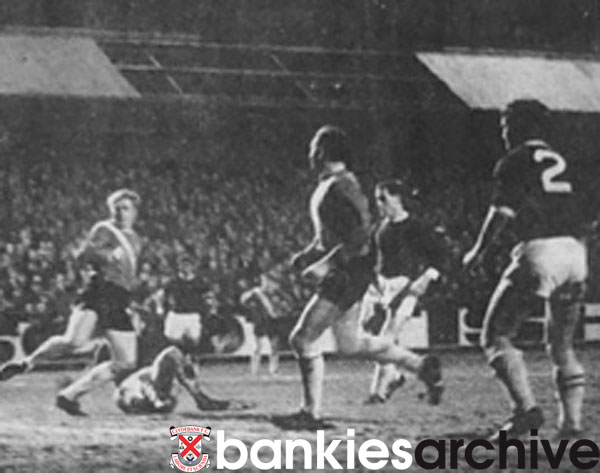 After 210 minutes of action packed football Clydebank and Queen of the South have still not resolved their Scottish Cup second Preliminary round to decide who receives Stirling Albion in the first round proper on Saturday week.

The clubs clash for the third time at Firhill tonight (Kick off 7.30) and on the evidence of last night' s titanic struggle, a single goal may decide the winners.

Last night' s replay at Kilbowie Park, which ended 2-2 - the same score as the first meeting at Dumfries - was not a game from the weakhearted or squeamish.

It was typical cup tie football which only the knock out competition provides - thrills, spills and all out endeavour, with the frills cut to the minimum.

The four goals were all scores during the regulation 90 minutes, and the 30 minutes extra time was really an anti-climax, for both sets of players had given their all and had little to offer during the extra period.

Clydebank, who kept up a non stop pace during the first 90 minutes and showed the better understanding between half backs and forwards, created enough chances to have won.

They recovered from a sixth minute shock when Ian McChesney; deputising for Kenny Dick at centre forward, put Queens ahead with a 20 yard shot that seemed to be going past the post but suddenly swerved into the net.

As Queens inexplicably started to play the ball across field and far too square, Clydebank roared back and got on top by taking the direct route to goal. Only the brilliance of Queens goalkeeper Allan Ball, who made a series of great saves, kept the Dumfries team in the game.

Then, in the 25th minute, Clydebank got their long overdue equaliser. Centre half Eddie Moore picked up a loose ball just on the halfway line and beat three defenders in a great run before laying on a perfect opening for inside left Tony Moy to crash the ball into the net.

At this stage Clydebank's right-wing wizard Harry Rutherford was giving the Queens defence a grilling, and Ball again came to the recue with another spectacular save from left half Tommy McGhee.

In the second half Clydebank made a tactical blunder by practically starving Rutherford out of the game, but in the 80th minute the little right winger's long range shot was going harmlessly wide when Queens right half Willie Collings inadvertently "teed" it up for Moy, who gratefully accepted the gift to put Bankies ahead.

It looked all over bar the shouting, but Queens with right winger Jimmy Davison, inside left Lex Law, and left half Jim Kerr outstanding , kept plugging away.

With only seven minutes left, Bobby Carroll, who had come on as substitute for left winger Peter Mitchell, crashed home the equaliser after Clydebank keeper Dick Madden failed to hold a shot.

The only note of dissention in an otherwise sporting contest was when Arthur Paterson, who substituted for Clydebank's Jim Fleming last in the game was booked by referee Kelly for a foul on Mike Barker during extra time.