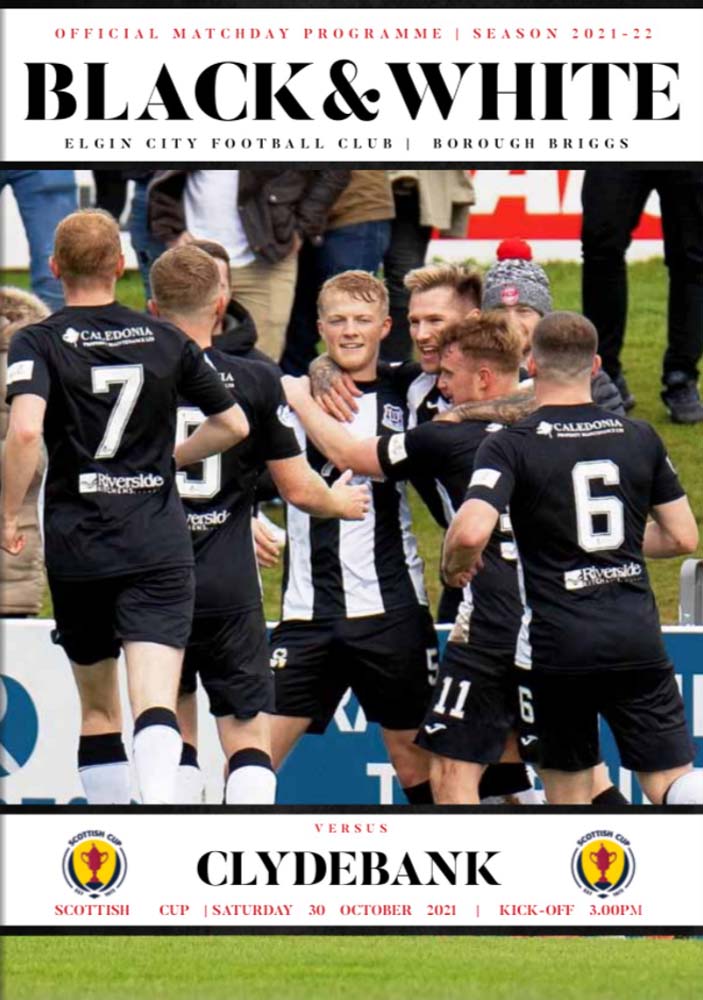 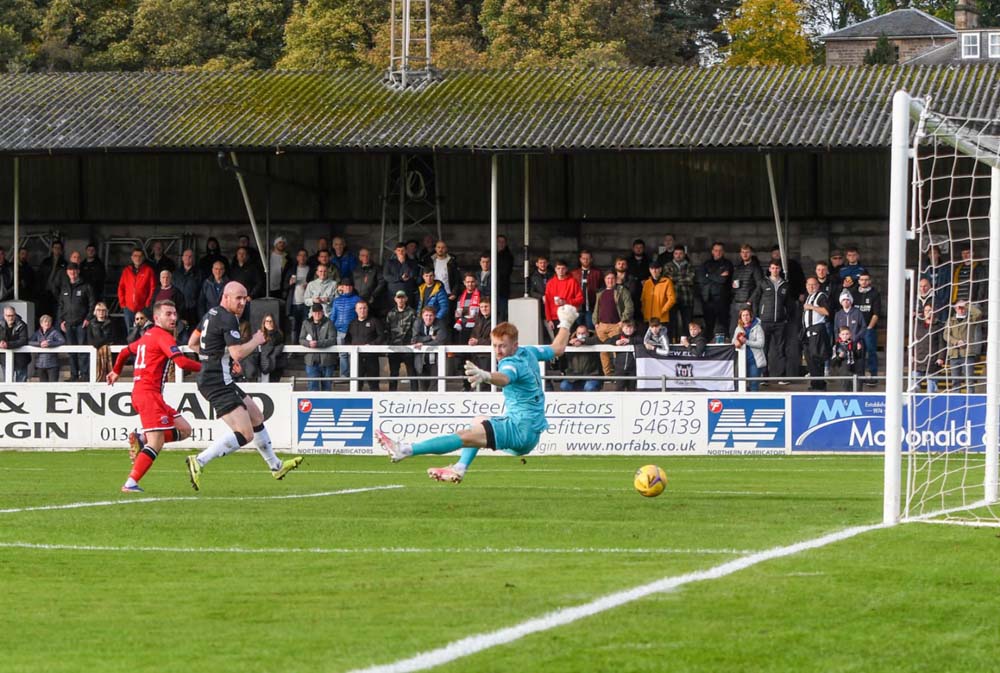 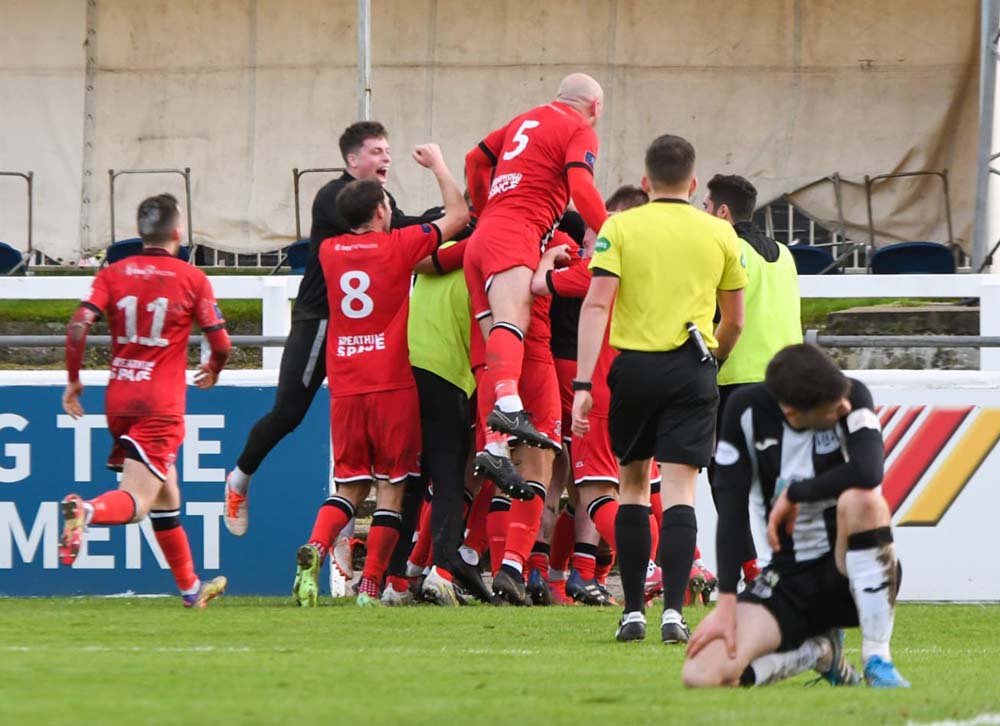 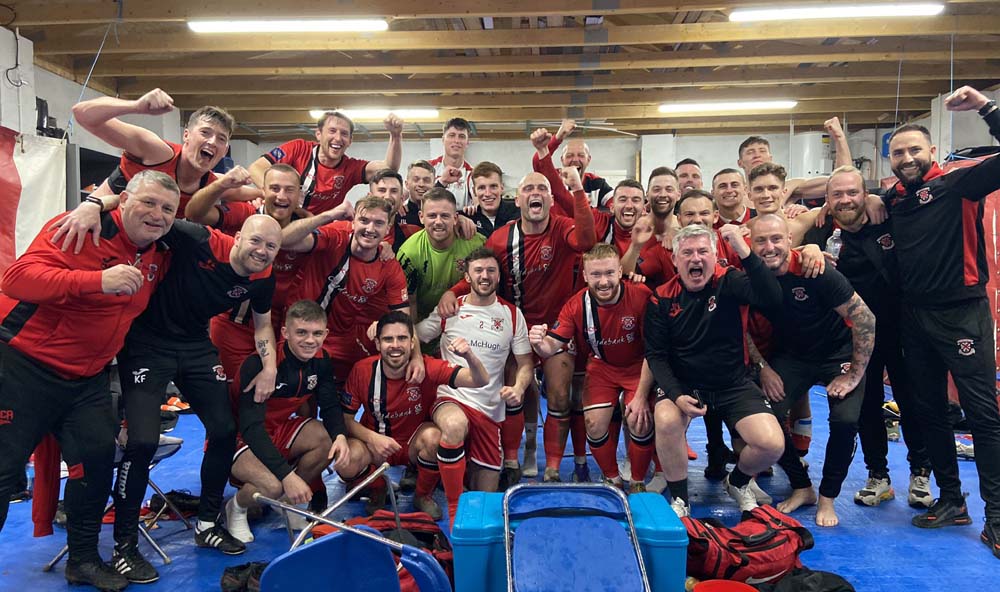 There were scenes of sheer jubilation at Borough Briggs as Clydebank gave their fans a day to remember as they stunned League Two side Elgin City in their Scottish Cup 2nd Round replay. Elgin were favourites after earning a draw against the Bankies at Holm Park on Monday night but goals from Liam McGonigle and Nicky Little put the Holm Park side ahead. Just when Elgin looked like a beaten side, they pulled a goal back ten minutes from time to set up a nervy finish but Clydebank bravely held on and will now face Clyde in the third round.

This win meant that Clydebank have now gone a remarkable 19 games without defeat away from home in competitive matches in a run that stretches back to January 2020.

The Bankies made a couple of changes for the replay after finding success with the four at the back in the first game. Paul Byrne dropped out of the defence and Matt Mclean took up his position allowing Liam McGonigle to occupy the wide left position in the midfield. Ross McPherson replaced Hamish McKinlay in the strikers role to give the Bankies a bit more competitive edge up front.

In the first game at Holm Park, Elgin were fast out of the traps and had the Bankies on the ropes early on, but there was no chance of a repeat here. Clydebank were much more confident and the first effort at goal came from a McGonigle snapshot that rolled wide. However, Borough Briggs has a huge pitch and it was much more difficult to guard the space and the Bankies were vulnerable to the home side’s pace.

After 8 minutes pacy winger O’Keefe caused havoc on the left and his cross was intercepted by Darroch, but good fortune smiled on the Bankies as the ball looped up and over the Bar. Shortly afterwards a defence splitting pass saw Wilson outpace the Bankies defence and as he rounded Donnelly he went too wide of the goal. He looked up and found O’Keefe whose shot beat the Bankies keeper but not Jamie Darroch on the line.

The Bankies took great heart from this let off and took the lead after fourteen minutes. Ross McPherson won the ball on the right hand side, and it broke to Gallacher. As he strode across the pitch the Bankies had a two on one situation. Gallacher drew the defender towards himself and at the perfect moment released the ball to McGonigle on his left. The Bankies winger met the ball first time from ten yards and sent it past McHale to send the large Bankies support crazy.

The Bankies retreated for a while after the goal, and I don’t know if it was the efforts on Monday, the size of the pitch, or both but some of the players were looking a little bit leggy. Elgin pressed the visitors for much of the rest of the first half, but found Bankies Donnelly at the top of his game.

O’Keefe was the main danger and he was denied by Donnelly after he hit a shot goalward from a great pass from Spark. However, the Bankies keeper somehow managed to get down preventing a goal by sending the ball over the bar.

The Bankies had forays up the pitch that never amounted to much and you felt the players had to get to half time with the lead intact to give them a chance to regroup. However, they had some defending to do first.

Donnelly was in unbeatable form as he saved from Wilson who pounced on a misjudged headed pass back by Hodge, then almost immediately threw himself down to the left to turn away a follow up shot from Dingwall.

Much like the first game between the sides, Elgin seemed to run out of ideas in the second half. The Bankies had the benefit of the interval to reset themselves and the introduction of Holmes for Black seemed to settle things down. Black appeared to be struggling as he came off the pitch.

Although Elgin maintained most of the possession, Clydebank were starting to poke a few holes in the home defence. McGonigle had an effort blocked then McPherson passed up a great chance to make it two. A free kick by Gallacher was drifted out to the right to Jamie Darroch. The big defender powerfully headed the ball to the far post beyond keeper McHale. McPherson managed to get his head on the ball from a few yards out but he glanced it just wide of the upright.

It was midway through the half that the Bankies increased their lead. Elgin seemed to get caught out when McKinlay managed to keep the ball in-play wide on the right. He found Gallacher in the middle of the park. Going for his second assist of the day he played the ball inside the box to Nicky Little on the left hand side. He still had a lot to do, but he cut inside the defender onto his right foot and sent the ball through a ruck of defenders and into the bottom corner.

From this point on Elgin looked like a beaten side. It was hard to see where a goal was going to come from for the home side, but then out of nowhere they did manage to pull one back. With 11 minutes remaining, substitute Sopel drove down the left and fired a low cross over, Peters struck it goalwards and Cameron forced it over the line from a yard out. There was a suspicion of offside about the finish, but was there to be a grandstand end to the game?

Thankfully, no. Elgin threw the ball into the box at every opportunity and caused some nervy moments but you felt that the Bankies defence with Niven outstanding were able to keep them at bay. If anything, it was Clydebank who could have scored a third goal.

Joe Slattery who was the best midfielder on the park was denied by keeper McHale in the closing stages as he sauntered through the Elgin defence. Lee Gallacher followed up on the rebound but McHale made a second stop to deny a goal.

Sopel had a last gasp effort from the edge of the box which went over the bar, and with almost five minutes of stoppage time, referee McDermid finally brought the game to a close.

Cue massive celebrations between the players and supporters which went on for some time after the final whistle. This result was huge for the Bankies. For long-time supporters it is like rewinding back to a time when Clydebank were a force in Scottish Football, but it is also about the future of the club. The profile this run has given the club has been immense and the good will that has been received throughout Scottish Football has been incredible. It has put the club back on the map for many people who forgot the Bankies existed and there is the prospect of another big match against old rivals Clyde FC at the end of November.

There were no failures in the Bankies squad today, but Slattery and Niven were both outstanding. However, the man of the match for me was Jamie Donnelly. Keepers quite often get overlooked but he was simply superb, not just for his vital saves but his overall command of his penalty area throughout the game.