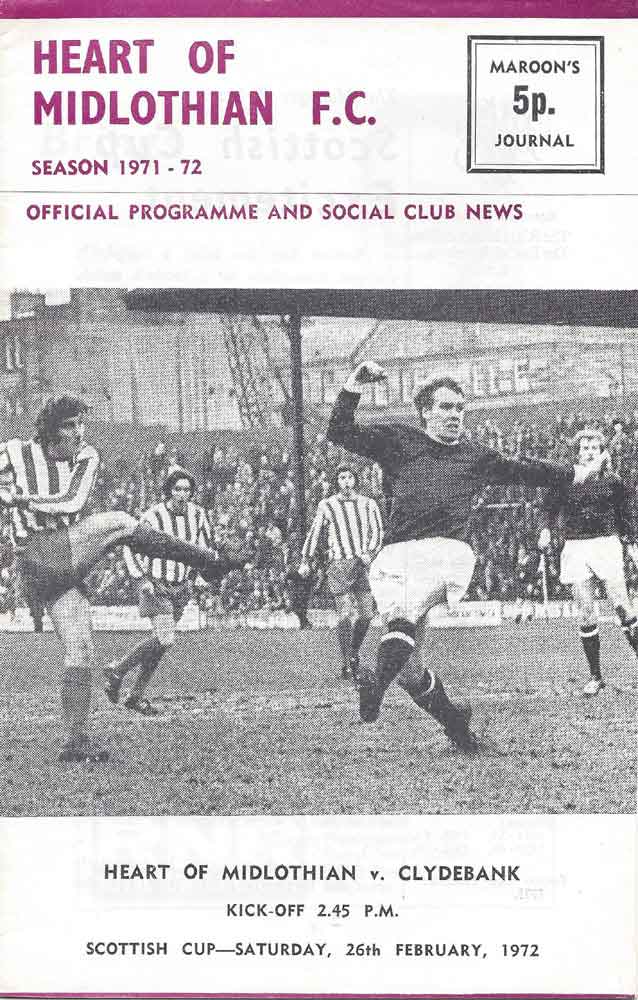 With as proud an away record as any team this year, the Bankies travelled to Tynecastle quietly confident of providing a Cup upset ... but returned to Kilbowie with their tails tucked between their legs.

The Edinburgh side were just too powerful for the "babes", who never really got into their stride to turn on the form which stood them so well at Methil. Most of the pre-match speculation was centred around Hearts forward Donald Ford. He was the man it was said who could do the most damage to the Bankies.

Although Ford scored one goal, it was Harry Kinnear a tall, blond, awkward forward who wore the number 10 shirt and who joined the Tynecastle club on a free from Forfar, who led the Bankies rout. He scored two goals and laid on another.

Although he had to pick the ball out of the net four times, Clydebank a goalkeeper Mick McDonald was undoubtedly his side's star man. His uncanny reflexes saved the Bankies on more than one occasion and his safe handling of the crossball brought many a round of applause from both sides on the terracing.

If he is to be faulted, it must be on his fielding of the ball when, once or twice, he put his defence in a bit of bother.

A run down on the rest of the team reads:

Davie Mitchell: Sure in the tackle and, as always, totally reliable.
Danny Gray: Always willing to help out his forwards, although defensively, he has played better.
Norrie Hall: He must hope never to come up against Kinnear again.
Jim Fallon: "Mr Dependable” as usual; hardly put a foot wrong the whole game except for o.g.
Dougie Hay: If sheer physical effort scored goals, then Dougie was in double figures.
Ian Currie: Very quiet and subdued; had one very good shot.
Bobby Love: This is one game Bobby will want to forget. ... and quickly.
Peter Kane: Ever alert, but not even all his experience could help pierce the home back-line.
Alan Munro: He could not be faulted for trying, but found the very strong defence on their best form.
Tommy McGhee: Another player who put a lot of effort into the game but got nowhere...
Graham McFarlane: Didn't really get time to settle after he came on for McGhee.

The stop watches were showing only 180 seconds had elapsed when Hearts took the lead. Jim Fallon, trying to pass-back to McDonald, could only watch helplessly as his lobbed pass went over the head of the goalkeeper, under the crossbar and into the net.

The first real scoring effort from the Bankies came in the tenth minute when Peter Kane took a pass from Hay to try a shot from outside the box. Although his aim was just high, it was something!

Hearts began to find their feet, and with Kinnear in his glory, the Bankies were pushed right into defence. Only a fine save from McDonald stopped the inside-left from scoring in the 13th minute with a header from a Sneddon cross.

In a home raid in the 18th minute another defender almost put the ball into his own net but Danny Gray was on the line to clear but his clearance only found the feet of Jim Brown. The inside-right's quick snap-shot took everyone by surprise - but it went inches over the bar. The height (or lack of it) of the crossbar saved the Bankies four minutes later when Andy Lynch got his head to a Wilson Wood free-kick, only to see the ball disappear into the terracing.

In a quick raid, Dougie Hay fired in a well-hit shot which flew just over. This heralded a short fight back and home left-back Peter Oliver had to look quick to turn an inviting cross from Hay round the post for a corner.

The Bankies task of drawing level was made even more difficult in the 36th minute when Hearts went two up. Again, this proved to be a disaster for the defence. Kinnear got his foot to a faulty pass-back from Fallon and neatly turned the ball past McDonald into the net.

Although they managed to hold out for the rest of the first-half, the Bankies had to admit defeat in the third minute of the second-half when Donald Ford netted number three.

This in contrast with the other two, was a well taken goal. The centre took a lovely flick from Tommy Murray, juggled the ball on his foot twice, before slamming the ball low into the net past the bewildered goalkeeper.

Hearts goalkeeper, Kenny Garland, showed the form that deposed Jim Cruikshank from the first-team when he spectacularly tipped a raging shot from Ian Currie over the bar.

Alan Munro actually had the ball in the net in the 51st minute but as the whistle had blown for off-side a while earlier, his effort didn't even raise a cheer.

A quick break by Ian Sneddon caught the Bankies flat-footed and with the odds in front of McDonald's goal 4-3 in Heart's favour, things looked black for the visitors. The pressure was quickly relieved when Sneddon made a mess of his final pass and put it out for a goal-kick.

Lynch should have put his side further ahead in the 68th minute when he completely missed his kick in front of goal after a pass from Kinnear had set him up.

With his first touch of the ball Graham McFarlane, who had come on for Tommy McGhee, almost set the ball up for Lynch to score but the substitute redeemed himself with a very quick recovery.

Fine goalkeeping from Garland foiled Dougie Hay in the 73rd minute. From a position almost identical to that which brought a goal at Methil, Hay sent in a scorcher of a free-kick which Garland just managed to push round the post at full stretch.

Two minutes later Hearts went four up with a rather dubious goal. Kinnear and McDonald went up in the box for Wood free-kick. The goalkeeper seemed to have the ball in his grasp when Kinnear headed it into the net. I personally thought the goal would not stand but the referee was adamant in allowing the score.

Hall and Mitchell were given a rollicking from McDonald ten minutes from the final whistle when they hesitated in clearing a ball allowing Lynch in with a shot which just scraped the post.