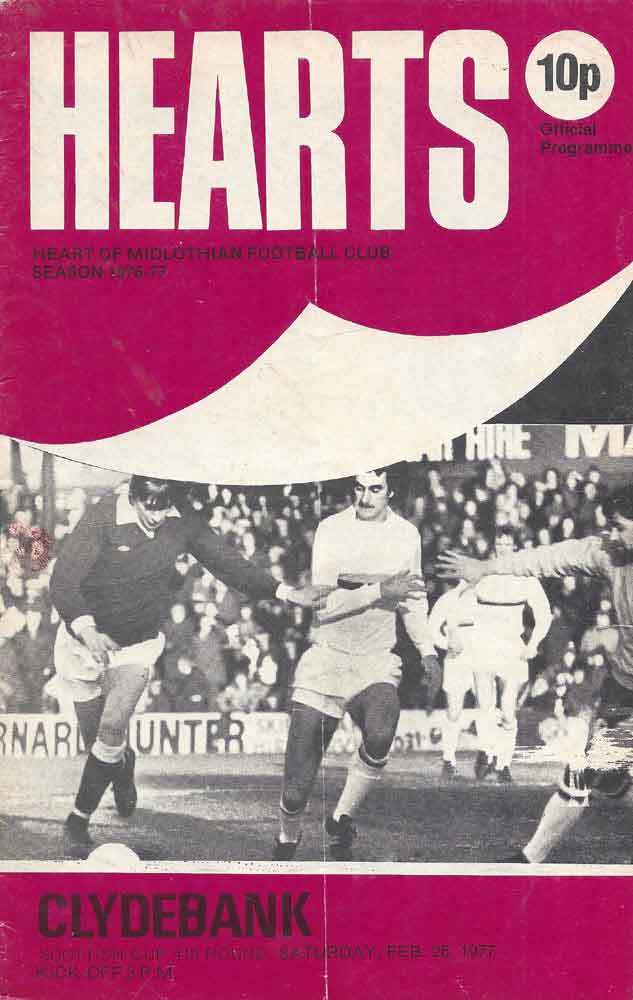 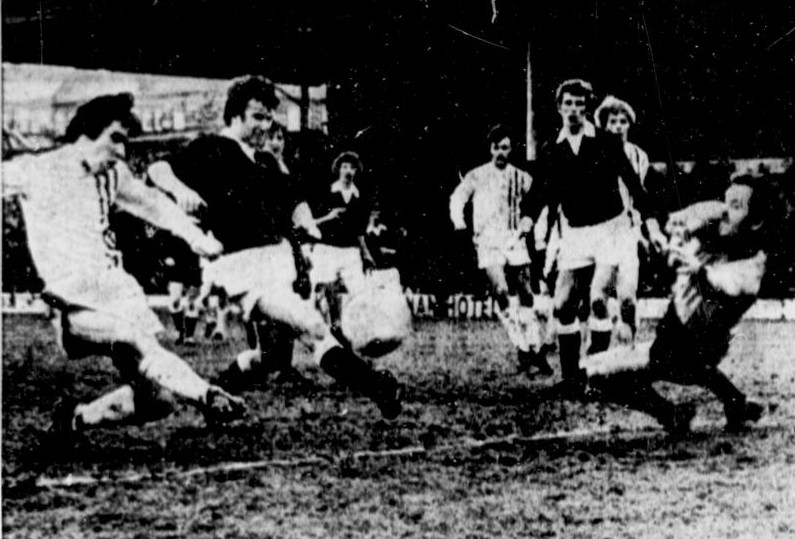 A Drew Busby header after 65 minutes effectively ended Bankies' interest in this year's Scottish Cup, after a dour struggle with Premier League Hearts.

With their biggest-ever travelling support to cheer them on Bankies really disappointed, for although they fought hard and were denied a late equaliser by an offside decision, they never reached their true form, with some players looking rather jaded.

The game started at a cracking pace, with Hearts forcing two early corners that were mopped up by the Bankies defence. The First Division team quickly showed that they were not out for a draw when a swift break saw Cooper and Lumsden carve open the home defence and McColl's cross was poked past the out-rushing Cruickshank by Joe McCallan. However, he did not get much behind his effort, and Kay raced back to clear.

Taking heart from this, Bankies charged forward again, and a brilliant run by Davie Cooper took him past three defenders and Kay again was happy to concede a corner from the winger's cross.

Hearts came back as play swung from end to end, and Prentice made a good diagonal run, but Kay's cross slipped past the far post with no one there to finish the job.

The 15th minute brought what might have been the most significant point of the game, McColl lobbed the ball across goal. A flick on by Hay and again by Hall gave McCallan space in the box.

Joe hit a right-foot shot and as the Bankies fans roared "goal," Jim Cruickshank threw himself upward to bring off a wonderful save.

The game badly needed a goal and Hearts duly obliged in the 65th minute. Prentice had a run down the left that had the pedestrian looking Hall floundering in his wake. The winger's cross was perfect for the in-rushing Busby and his header from six yards gave Gallagher no chance.

Just five minutes from the end it seemed that all Bankies pressure had paid off, when a Fallon free kick was pushed through by Cooper and Billy McColl slotted the ball - past Cruickshank.

Bankies joy was short lived however, as the referee disallowed the goal for offside.

Had they played to their usual form Bankies would still have been in the Cup and they proved that there was no difference between themselves and their Premier League opponents.

Hearts must have been delighted to go through, for they would probably admit that they did not play particularly well and could not have had any complaints had they to go to Kilbowie for a replay.

---
report 2
---
The Tynecastle Uri Geller once again produced his mind bending act from a distance of 45 miles on Saturday when tiny hands, unwittingly guided from afar, drew out a home meeting with East Fife in the Scottish Cup Quarter Final.

With due respect to the Fifers the draw set Hearts on course for the semi-finals and possibly the final. The Edinburgh men made it to the final last season before going down to Rangers – and that was the only time in the tournament they came up against Premier League opposition.

If they go through to the semis this time it is possible they could again reach the last stage before meeting a contemporary league side. That would surely set some kind of record.

However fortunate they are in the draw Hearts have shown an ability to deal efficiently with ambitious first division sides, a feat which is never easy.

They produced one move of beauty against Clydebank and it was enough to the hopes of an enterprising Kilbowie team. Drew Busby began it, the ball was pushed out to Tynecastle’s tantaliser-in-chief, Rab Prentice, and his perfect cross was headed sweetly past Gallacher by Busby.

It was the one move Clydebank’s manager, Bill Munro, had warned his players about all week, but Munro was in no mood for recriminations. “I thought we played fairly well, not as well as we can, but I believe we did enough to earn a replay” he said.

Few neutrals who watched the less-than-absorbing tussle would disagree. Now Munro and men head back to the quieter reaches of the first division, where they need only play out the rest of the season carefully to ensure their place among the stars next term.

That will suit the ambitious Clydebank. Munro’s parting remark as he left Tynecastle was: “If that is the Premier League I am looking forward to it,”

From that you can take it that no one at Kilbowie is losing sleep over regular meetings with the biggest names next season. Neither they should, for it will not take a lot to make them worthy competitors in the Premier Division.

They need a little more pace in one or two positions, but with players like evergreen Jim Fallon, Mike Larnach and Davie Cooper, as well as Billy McColl and Joe McCallan, there is enough talent to keep the success story going.

In fact, they had more good players on the day than Hearts, whose top men were Cruickshank, Busby, and Eamonn Bannon, a youngster improving with every game.

Hearts manager, John Hagart, was particularly please by Drew Busby’s showing. He explained: “Drew had a very heavy cold all week and still did not look 100% today, yet you saw how he played.”

Cruickshank, as ever, was a difficult man to beat. He had a couple of saves early on, one especially – from McCallan – which proved vital in the end.

Clydebank never faltered from their commitment to go forward and the still looked the more likely side when just after an hour’s play Hearts struck with the goal that could be worth Busby’s weight in potatoes.

Even then the first division team headed towards Cruickshank, but always came up with near misses. McColl did have the ball in the net bit from a clearly offside position.

The final whistle brought relief for Hearts fans and disappointment for the western travellers. Clydebank have met three Premier sides this season, Rangers, Ayr United and Hearts, and have lost all three. But they have learned a lot in the process, as some sides will discover next term.