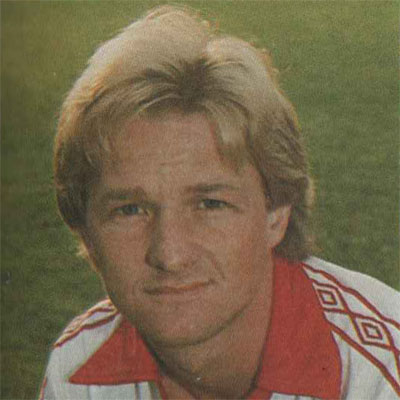 Without a doubt Jimmy Given was one of the most popular players to ever pull on a Clydebank shirt. Jimmy was the kind of player who most supporters could identify with. You could reel off the usual platitudes, but in Jimmy’s case it was all true. A more dedicated player you are never likely to see. He was a great ambassador for the club both on and off the pitch and he was a well deserving inductee to the Hall of Fame in 2012.

Jimmy Given was brought to the attention of Jack Steedman towards the end of Clydebank’s season in the Premier League in 1978. At the time, he was plying his trade with Johnstone Burgh and he was invited to trial in the Bankies reserve side. He made his unofficial debut against Partick Thistle reserves, scored a goal and impressed Mr Steedman enough to be offered terms with the club.

After being a full time side for several years, Clydebank returned to being a part time outfit after being relegated from the Premier League. Jimmy was to be part of that rebuilding process. It might seem strange nowadays but Jimmy was just shy of his 23rd birthday when he moved up to the Seniors. It was quite often the way back then that players would cut their teeth in Junior football before making the step up.

It was clear that Jimmy was going to be an integral part of the first team squad as he joined the pre-season tour of the Highlands playing in both games against Nairn County and Forres Mechanics. The Bankies coaching staff were obviously confident in the young midfielder and he was handed his competitive debut in the first match of the season against Kilmarnock which ended in a 2-1 win.

We only had to await a month for Jimmy’s first goal to arrive when he netted against Airdrie at Broomfield in a one all draw. He went on to play in all but two of Clydebank’s games that season and he earned his first winners medal when the Bankies won the Stirlingshire Cup for the first time in their history defeating Dumbarton 1-0 with a John McCormack header. This was scant consolation after losing out on promotion to the Premier League on goal difference to Kilmarnock.

The next couple of seasons saw the team struggle as a whole but with consistent performances on the left side of midfield, Jimmy was starting to make a name for himself. Season 1980-81 was especially significant as although they struggled in the league Clydebank reached the quarter finals of both major cup competitions. It was Jimmy’s goal from the penalty spot against Premier League Kilmarnock which guided the Bankies into the Scottish Cup last eight for the first time in their history. The same season saw the blond midfield ace finish the club’s second top scorer with ten goals in all competitions as he took over the job as penalty taker on a regular basis.

The following season saw Clydebank again at the right end of the table challenging for promotion with Jimmy very much to the fore netting his fair share of spot kicks and helping provide chances for the emerging Kilbowie youngsters Tommy Coyne and Bobby Williamson. Unfortunately the club missed out but ended in a credible fourth position in the table.

With four seasons at Kilbowie under his belt Jimmy had racked up almost 200 appearance missing just 4 games in that time. 1982-83 saw the Bankies missing out on promotion again, this time finishing in third place. Jimmy netted from the spot in the memorable 6-1 victory over runaway league winners St Johnstone.

It was at this stage Jimmy had a goal scoring drought, and it took his until December 1983 before he hit the net again. It was also his first goal of the season and it couldn’t have arrived in more dramatic fashion. Partick Thistle were the opposition and scoreline was goalless as the 90 minutes had all but gone at New Kilbowie when Eric Ferguson was upended in the penalty area. Jimmy seemed the coolest man in the ground as he sent keeper Jim Brough the wrong way. Almost 40 years later I can still see this goal in my mind’s eye. This spot kick was scored at the away end and at that time you could still go through the gate to the other end of the ground as segregation was not enforced at Kilbowie. Sitting among the Thistle supporters at the 18 yard line Jimmy picked us out to celebrate. What a moment! For the third year in a row the Bankies missed out on promotion finishing fourth, but for Jimmy he had the personal record of scoring in six successive matches

At the start of 1984-85 season, Jimmy was asked to adopt a new role as took over the number three jersey from Tony Gervaise who moved to Hamilton. Now 29, he was to take to this new position like a duck to water and he was voted the first ever recipient of the Supporters player of the year award. More importantly a lifetime’s ambition was fulfilled as Bankies, after a seven year wait, reclaimed a place in the Premier League. And not surprisingly a Jimmy Given penalty kick was all important as he netted in the 2-1 victory over St Johnstone that secured promotion.

Life in the Premier League was tough for the Bankies. Jimmy and his team mates strived manfully but were unable to stop the club finishing in bottom place in the table. The club were given a relegation reprieve due to league reconstruction but the following season was just as difficult. Approaching his 32nd birthday Jimmy, found his place under threat from the newly signed Jim Rodger and he finished the season with just the odd appearance from the bench.

At the end of the season Jimmy left the club on a free transfer. He subsequently joined Stirling Albion where he stayed for three more years before hanging up his boots. In all, Jimmy Given played 376 games for Clydebank placing him fourth in the all-time appearances list and scored a respectable 48 goals with 23 from the penalty spot. For a generation of fans he left behind an abundance of happy memories for those privileged to see him play.